Walker explained the decision-making process behind entering the 2023 Arnold Classic and discussed his professional rivalry with Derek Lunsford. 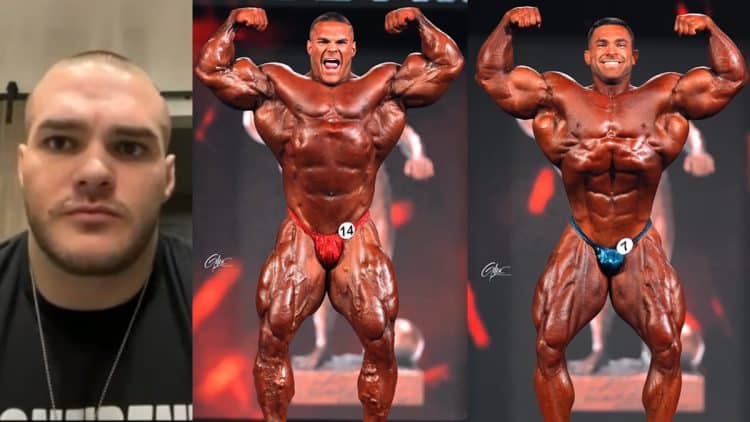 Nick Walker has ambitious plans for the current bodybuilding season. During the latest Mutant & The Mouth podcast, Walker explained why he entered the 2023 Arnold Classic and what’s next for 2022 Olympia runner-up Derek Lunsford.

Few bodybuilders in the IFBB have turned in rookie seasons like Nick Walker. In 2021, he claimed the New York Pro and Arnold Classic titles consecutively. At his first Mr. Olympia competition, Walker’s freak factor and muscularity guided him to a fifth-place finish.

Instead of defending his Arnold Classic title last year, Walker put his head down and trained for another Mr. Olympia contest. While he separated from his coach last February, the two re-joined each other roughly 12 weeks before the 2022 Olympia show. At the event, Walker nailed his peak and earned bronze alongside the Olympia People’s Champ Award. The only two men to surpass Walker on the scorecards were champion Hadi Choopan and Derek Lunsford.

Last week, the 2023 Arnold Sports organizers increased the prize money for the Open class champion to $300,000 — only $100,000 less than what Olympia awards its Men’s Open winner. A flood of competitors rushed to enter, including Nick Walker, Andrew Jacked, and Patrick Moore. There was speculation Lunsford would enter the upcoming show as well, though he and his coach (Hany Rambod) have yet to reveal any concrete plans.

Speaking with Guy Cisternino, Walker discussed jumping into the 2023 Arnold Classic. He also broke down what could be next for one of his professional rivals, Derek Lunsford.

Nick Walker: ‘I Heard Through the Grapevine Derek Lunsford Isn’t Doing The Arnold’

Walker doesn’t believe Lunsford will compete at the 2023 Arnold Classic.

“I’ve heard through the grapevine that he’s [Derek Lunsford] is not doing the Arnold,” Walker said. “This is where I’m going to jump in. Did he add muscle or did he just keep it without losing it. I think he restricted himself those off-seasons, so I think what he gained back is what he normally has, plus maybe a little bit more I’ll say but he didn’t put on an astronomical amount of mass, he just didn’t have to suffer and lose mass to make 212.”

Given the success Lunsford has enjoyed since switching out of 212 Bodybuilding, Walker is curious what gains he will make during this off-season.

“This will be the off-season where we see how much tissue he puts on and we’ll see what he looks like when he stands on the [2023] Olympia stage.”

Admittedly, Walker was influenced to enter the 2023 Arnold Classic after they increased the prize money.

“I mean — to sum it up — yeah [the prize money changing affected my decision to enter 2023 Arnold]. That’s about right.”

Previously, Walker declared he wouldn’t be doing the AC in March. He enjoyed the holidays after Olympia and ultimately changed his mind.

“They gave me till after the holidays to think about it, I said, ‘okay,'” says Walker. “I felt good. So they reached out again, they basically said they were going to up the prize money to 300K — I said ‘count me in.'”

The 28-year-old plans to take some time off after the 2023 Arnold Classic.

“Yeah, after this show, I’m done until the Olympia. You know, because I know after I do this show, I personally believe I’ll have enough down time, rest time, also enough time to make some improvements before starting prep [for 2022 Olympia]. I’m done after this one.”

Walker on 2022 Olympia Posing Routine: ‘Nothing Was Planned or Organized’

Looking back at Olympia, Walker said he winged most of his posing routine.

“Yeah, [the 2023 Arnold judges posing rounds] I believe so,” Walker said. “So, listen, it was funny because I talked a lot of shit [before Olympia]. I remember I told Matt, I told Maria, my mom, I got something you guys have never seen before. I had nothing planned, no routine. I was like, ‘I don’t know what I’m going to fuc**ng do.’ I’m backstage. I know my song by heart I listen to it all the time.

So, the only thing I could think of, was, ‘you know what, I’m going to see if I can get on my knees really fast,’ so I did some shuffling backstage, and then I was like, [smacks fists], I got this. Went on stage, winged the whole fuc**ng thing. Nothing was planned or organized.”

He plans to exercise a different approach in Ohio.

“I will probably plan a little more [for the Arnold], I’ll try to have a base of what I want to do and then just spin off of that.”

Walker will be tasked with facing a credible lineup of Men’s Open talent. Samson Dauda, who finished sixth at 2022 Olympia, is determined to win his first Arnold. Meanwhile, a pair of 212 greats in Shaun Clarida and Kamal Elgargni will shake up the lineup as well as Andrew Jacked, William Bonac and Patrick Moore.

The second-most prestigious bodybuilding title is up for grabs in less than two months. With Lunsford seemingly out of the picture, many regard Walker as the overwhelming favorite.