The eight-time Mr. Olympia discussed Liver King's alleged ab implants before inviting him over for a workout. 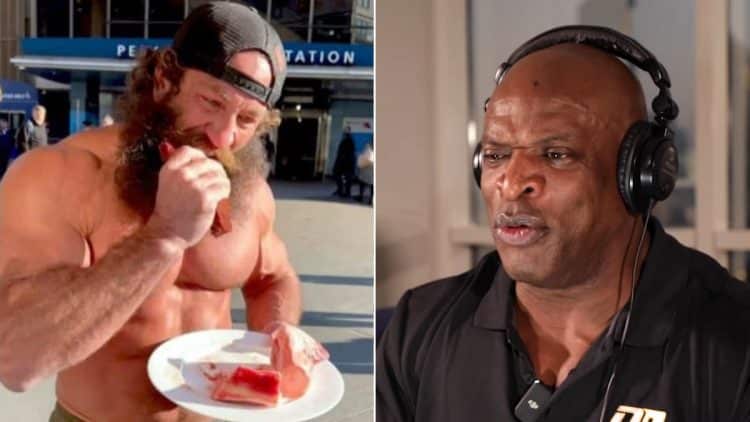 Bodybuilding legend Ronnie Coleman established himself as an all-time great and knows an impressive physique when he sees one. In a recent video, he gave his thoughts on Liver King’s build and reacted to some of his craziest moments.

Coleman’s shocking blend of muscularity, size, and conditioning set him apart from the rest of his opponents. During his career, he managed to earn eight Mr. Olympia titles, tied for the most ever with Lee Haney. Ronnie’s rivalry with his successor, four-time Olympia winner Jay Cutler, will likely go down in history as one of the greatest.

He stepped away from competing years ago, but Coleman’s passion for the sport hasn’t gone anywhere. He struggles to walk as a result of several surgeries but pushes the pace anytime he’s in the gym. At 58 years old, Coleman is an inspiration whose work ethic remains one of his most impressive attributes.

While they’ve taken wildly different paths to superstardom, Liver King received notoriety online over the past few years for his jacked build and raw meat diet. Once known as Brian Johnson, the organ-eating primal shared that he no longer associates himself with his old name. Instead, he’s regarded as Liver King, a being who is driven by the nine ancestral tenets.

From eating raw meat, working out to simulate an ‘ancestral hunt,’ to absorbing sunlight, the 45-year-old influencer swears by this lifestyle and credits it for helping save his children’s lives. The latest to discuss his obscure way of life is Ronnie Coleman, who is reacting to a collection of Liver King’s wildest moments.

In his latest YouTube video, Coleman invites his audience to watch him react to some Liver King video clips.

“What’s going on guys, Big Ron here, and I’ve been hearing a lot of talk about this guy Liver King. So my team put together some reaction videos, so I’m going to give ya’ll my personal reaction to them, yeah buddy!” Ronnie Coleman said.

While Liver King was pouring maple syrup on his raw meat, Coleman noticed something off about his midsection.

This isn’t the first time Liver King’s abs have become the topic of conversation. The 45-year-old says in addition to steroid accusations, others have said his abs aren’t real. Some in the community, including fitness influencers like Kenny KO, have outright asked Liver King about the matter. Though, when they met, Liver King shot down the allegations as per usual.

Months ago, Liver King made light of the ongoing accusations. In fact, he went on Logan Paul’s Impaulsive podcast and joked about his abs being worth $10,000 each after getting implants.

Coleman continued to watch the social media phenomenon fire off some reps on a row machine before sledgehammering a giant wheel. After seeing the clip, Coleman said he believes Liver King’s abs actually are real.

“Looking good bud. Now, I can tell your abs are real because they kind of disappeared a little bit, but they look good!”

When Liver King refueled with some raw liver, Coleman struggled to watch.

Coleman gave Liver King praise after watching him pull a truck in neutral. Then, again, he had trouble watching Liver King devour a raw testicle. The social media star proceeded with some heavy squats after the lunch break.

“Way to use that belt. The most important thing of all — that belt. Keep that back safe and straight.”

Before the end of the video, Coleman had a hard time believing that Liver King routinely eats raw meat. He gave his final thoughts on the popular influencer.

“The raw meat and the raw liver is unorthodox. It’s kind of hard to believe. He trains good though. He lifts heavy. Good form, strong as hell but the raw sh** got me kind of queasy,” Coleman said.

Coleman would relish an opportunity to train with Liver King.

“Hey guys, after watching that reaction video with the Liver King, he might be a little crazy — a little different, but I think he’s really kind of cool. So Liver King — if you ever want to get together and do a workout with your boy Big Ron, let’s do this. Bring it on, yeah buddy!”

The last time fans saw Liver King in action, he was challenging UFC’s Paulo Costa to a liver-eating contest. Cheating accusations followed Liver King’s victory when Costa said the influencer seasoned his meat with syrup and salt instead of eating it as is.

It’s evident Liver King’s ancestral message continues to spread with Coleman being the latest to acknowledge his whacky albeit effective training regimen. Coleman respected Liver King’s work ethic but is steering clear of any raw organ meat in the future.