The anticipated boxing match between Martyn Ford and The Iranian Hulk has been removed from the card and a replacement bout is to be announced in the coming weeks. 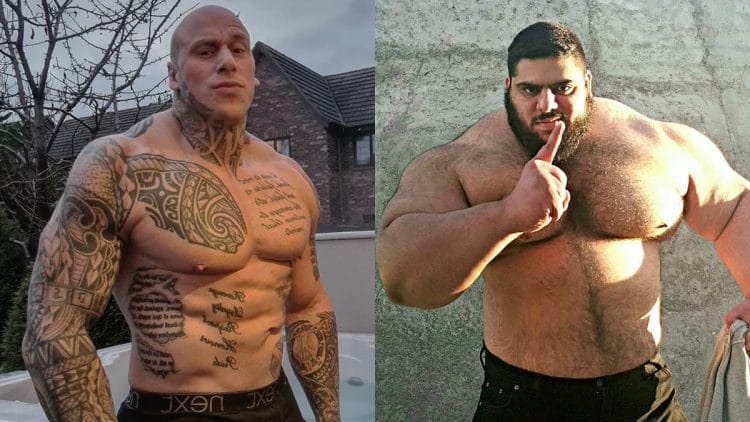 Despite tons of promotion and pre-fight hype, the April 30 boxing match between Martyn Ford, and The Iranian Hulk, real name, Sajad Gharibi has been removed from the event. In a recent video published on Instagram, Ford shared the news and revealed that the promotion is seeking a replacement fight for the main event.

In late Feb. the two combatants met for a face-off in Dubai that erupted into violence. Gharibi initiated the heated exchange and attempted a takedown against Ford. Martyn shrugged him off and the two reset for another face-off that saw Martyn shove The Iranian Hulk to the ground.

After injuries struck the card, the fight was postponed from April 2 to April 30. Before the recent cancellation, both men released training footage on Instagram to promote the marquee fight. Known for his unconventional training methods, The Iranian Hulk shared a video of him absorbing full-blown punches to the body to prepare for the fight. Meanwhile, Martyn showed off his footwork in a recent prep video. The six-foot-eight titan said that he ‘made a beast from scratch‘ and admitted to weighing 320lbs ahead of the now-canceled fight.

Martyn Ford released a video on Instagram expressing disappointment that his fight with The Iranian Hulk has been postponed or canceled.

“This is a statement I didn’t want to have to release but unfortunately, April 30th, my fight is going to be postponed. The event is still on Boxstar. It’s still on. It’s just my fight okay?

Now, for all those who have tickets, there is a link below and there will be more information on how you can go about that. Like I said, the event will still go ahead. There is some great people, some great fights on.

Unfortunately, mine won’t be one of them for reasons out of my control. It doesn’t take a genius to figure them all out. I don’t want to go down the route of talking about it, too much time, too much energy has been wasted. For me, personally, I’m still here. I’m still training hard.

There will be a debut, there will be a fight. I’m just not 100% sure of who, when or why. But it will happen, and nothing will change there. Thank you.” Martyn Ford shared.

WEDNESDAY, MARCH 30, 2022: Boxstar can today confirm that due to unforeseen circumstances outside of our control, the upcoming bout between Martyn Ford and Iranian Hulk will no longer take place.

The bout was due to headline the Boxstar Celebrity Boxing event at London’s O2 Arena on Saturday April 30.

The event itself, which is set to feature former Premier League footballers Patrice Evra and Jamie O’Hara, along with podcast host James English, will continue to go ahead as planned.
Ford said: “Naturally, I’m hugely disappointed my fight against Iranian Hulk will no longer be going ahead, particularly given the fact I have dedicated so much time to my training programme and doing everything to ensure I was in the best possible shape to headline the event.

“Although I will no longer be involved, I now look forward to attending the Boxstar Celebrity Boxing event as a fan, and showing my full support for those brave competitors who are taking part, some of whom will be competing in a boxing match for the first time in their lives.

“I would like to thank my fans for their continued support, and I hope to return to the ring in a competitive nature as soon as possible.”

A replacement bout is expected to be announced in due course.
Tickets for the event can be purchased via boxstar.uk” Martyn Ford posted.

Many fans are beginning to speculate as to why the boxing match has been removed from the card. The Iranian Hulk made headlines last week after breaking down in tears on live TV after revealing that his family disowned him following the embarrassing face-off with Ford.

Ford and Gharibi have a longstanding rivalry. Years ago, the pair were expected to meet in MMA for their combat sports debut, as the Polish MMA giant, KSW intended to host the spectacle. Despite Ford inking a contract with the promotion, a fight with the Iranian Hulk never materialized.

With the fight off the table, perhaps a fight between Ford and former Strongman star Hafthor Björnsson is in the cards after all. Despite Björnsson’s recent victory against Eddie Hall in the sweet science, Ford believes he would knock the Game of Thrones star out if they ever met in the ring. Conversely, Hafthor shared a similar sentiment and stated that he would smash Ford if they were to sign and fight each other.

Martyn Ford has made it clear that the Boxstar event scheduled on April 30 inside the O2 Arena in London, England will go on as scheduled. Unfortunately, Ford will not fight The Iranian Hulk and voiced his desire to return to the ring in a competitive nature as soon as possible.