Michal Krizo looks like an unstoppable force during a back workout ahead of the 2022 Olympia. 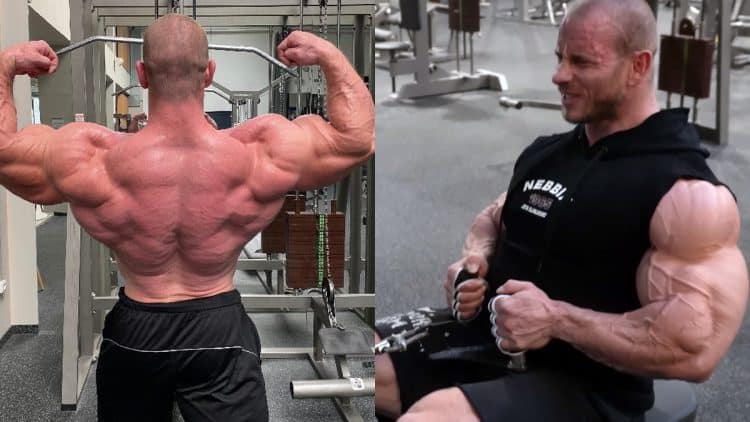 Michal Krizo is training like a man possessed to shake up the Men’s Open division at the 2022 Olympia. The 32-year-old Slovakian bodybuilder first made waves in the IFBB Elite Pro League. His size, incredible proportions and symmetry made him a hot prospect when he decided to transition to the NPC league to kick off the Mr. Olympia campaign. Krizo dominated the competition at the 2022 Amateur Olympia Italy to earn his IFBB Pro card and handily won the 2022 EVLS Prague Pro within a few weeks after that. This victory put an approval stamp on Krizo’s 2022 Olympia qualification. The most prestigious bodybuilding competition will take place in Las Vegas from Dec. 15 to 18 and it will be the greatest competitive challenge of the Slovak’s career so far.

Veteran bodybuilders like Samir Bannout and Jay Cutler are convinced that Krizo could be a real threat for the top competitors in the division. However, the 2022 Prague Pro winner has earned some rivals like Blessing Awodibu and Iain Valliere as well. After training in his home country for the majority of his competition prep, Krizo has arrived in the USA and he is busy doing the final bit of work in the gym. Recently, Krizo went through a punishing back workout under Coach Alexander Hlobik’s watchful eye. So without further delay, let’s check out how Krizo pushed through the session.

Krizo started the training session with this bodyweight compound movement. After doing a few sets with slow and controlled movement to increase the blood flow into the back muscles, the towering Slovak took to a cable machine exercise next.

While vertical pulls like lat pulldowns and pull-ups are effective for building a wide back, horizontal pulling movements like seated rows are essential for building back thickness. Krizo jumped into the close-grip seated rows next and pushed through a few heavy sets.

Performing different variations of exercises compels the muscles to work from different angles. This helps emphasize different parts of the same muscle and helps in complete development. Krizo took to the reverse incline variation of Lat Pulldowns next and cranked out a few solid sets to add more stimulus to the back as Coach Hlobik observed the technique. He used a rope attachment for the exercise.

Lat pulldowns are essential back exercise that activates Latissimus Dorsi and upper back muscles like the Rhomboids, Teres major, and Teres minor. Additionally, they stimulate the rear delts and biceps. However, pectoral muscles also get activation during close neutral grip lat pulldowns. The 32-year-old bodybuilder cranked out some good sets of this exercise and moved on to the next one.

One Arm Bent Over Dumbbell Rows

If building strength and muscle in the back is your goal, it is not wise to exclude this old-school free-weight movement from the back routine. Another great benefit of this exercise is that it works the biceps brachii, brachialis, and brachioradialis muscles in the back and helps improve the arms size and strength as a result. Coach Hlobik guided Krizo through solid sets of this exercise and the Slovak jumped into the finisher of the day.

Michal Krizo next performed this old-school exercise. Dumbbell pullovers are beneficial in working a variety of muscle groups like back, chest, arms, and shoulders. Additionally, it also works the abs if the person maintains a solid form without compromise. After pushing through a few heavy sets of this exercise, Krizo called it a day in the gym.

Michal Krizo’s conditioning was admittedly a bit off during the 2022 EVLS Prague Pro. However, it did not stop him from claiming victory there. But Mr. Olympia is a whole different ball game and Krizo is ‘a million percent’ sure that he will bring a far better package to the show. He showed off his jacked physique with an incredibly vascular look and muscle definition in an update ten days out of the 2022 Olympia.

Despite the weight of expectations from an entire nation, Krizo has been able to carry the load really well so far. In the event that he executes the remainder of his strategy well and continues to improve, on December 18 he will probably be able to silence the remaining doubting army.

Is a Pre-Workout Supplement Bad For Your Heart Health?