The bodybuilders level up their fitness game with a strength-focus workout routine. 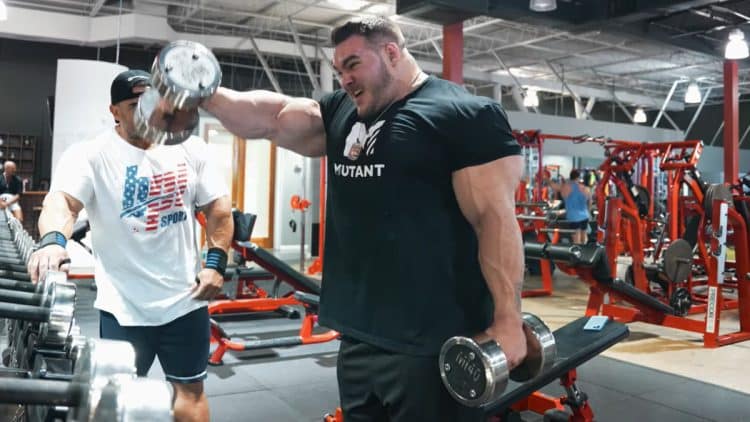 2021 Arnold Classic Champ Nick Walker came together with former 212 champion Kamal Elgargni and Jennifer for voluminous delts and biceps workout in a recent YouTube video. The three bodybuilders worked on an insane shoulder and biceps routine to pump the muscles and focus on boosting strength by using compound and isolation movements.

Nick Walker is an impressive bodybuilder who continues to push himself every day. Considering it off-season, he’s focusing on volume, with the hopes that it will be quite useful when it’s time to lean out and cut. He secured the title at 2021 Arnold Classic, and lived up to his prediction of winning it at his first attempt!

On the other hand, Kamal Elgargni is another bodybuilder who has achieved the impossible by securing the victory at the 2018 Arnold Classic and securing the third position at 212 Olympia. In 2019, Kamal has crowned the champion.  At last year’s Olympia, he placed third again. Now, with 2022 Olympia approaching, Kamal continues to push his limits to become stronger and bigger.

Nick, Kamal, and Jennifer go through a high volume shoulders and biceps workout

Prior to starting the workout routine, Nick, Kamal, and Jennifer worked on a few warm-up sets with progressive overload to get the blood flowing and loosen & activate the muscles before moving to compound movements.

You can find the exercises they used in the video for the delts and biceps workout:

The exercise started with a lower load but the bodybuilders kept upping the weights to work on strength and muscle endurance. The idea was to go as heavy as possible and progressive overload is always emphasized upon during resistance training.

Nick focused on a single weight drop set for his last set.

“We just want to switch it up and try something a little different.”

They maintained a strong upright posture with chest flared and shoulders stable. To ensure a full range of motion, the trio focused on lighter dumbbells towards the beginning.

The last set was with heavier dumbbells which required some spotting.

They moved on to reverse delt flyes. While Nick maintained a straight arm, Jennifer and Kamal maintained a bend from their elbows.

Both variations assist with activating and focusing on the rear delts as well as some of the smaller back muscles.

Next, they moved on to dumbbell front raises which work on the front delts or anterior deltoids.

Following that, Nick, Kamal, and Jennifer moved to the behind-the-neck shoulder press. The bodybuilders kept the adjustable bench at a slight angle before hitting the reps. Moreover, for this exercise, they tried to control the negative to boost muscle endurance and strength.

This exercise focuses on building your shoulder, triceps, and traps.

They ended the delts workout with barbell shrugs.

Nick Walker and Kamal Elgargni had previously teamed up for a smashing shoulder workout and crushed it!

Coming to their biceps workout, they started with dual low cable curls. They maintained a steady elbow while squeezing the biceps at the top of the motion.

The idea was to continue adding weights as the sets increased to enable the muscles to take on additional resistance and grow back thicker and stronger.

The next exercise for the biceps routine was the EZ-bar curl. This particular biceps exercise makes use of both the bicep heads, which helps with overall development of the bicep muscles.

Their final exercise on the bicep routine was a dumbbell hammer curl.

“That is today’s shoulder and bicep workout.”

Check out the full workout video below:

As of now, Nick is aiming to add more roundness to his muscles while keeping up the volume. This overall volume over intensity workout will assist him massively when prep season comes around.

There is no question that both Elgargni and Walker are strong competitors in their respective divisions. The goal for Elgargni is to dethrone Derek Lunsford, who won the 2021 212 Olympia title in a tussle with Shaun Clarida. Walker hopes to defeat two-time reigning Mr. Olympia Mamdouh “Big Ramy” Elssbiay for the Sandow trophy.  We are quickly approaching the 2022 Olympia weekend, which takes place from December 15 to 18.