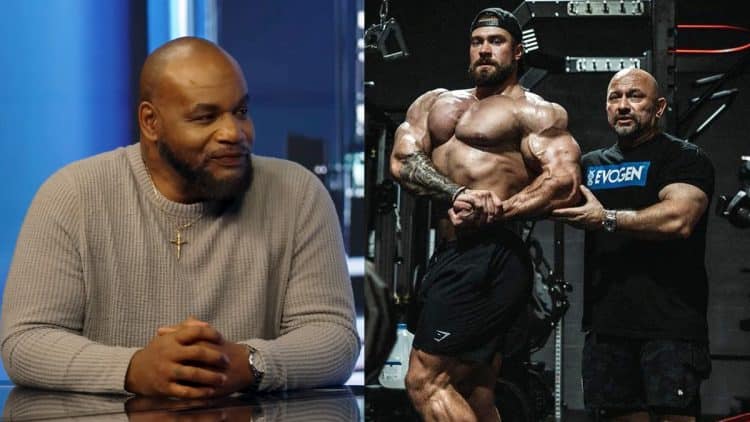 Bodybuilding Hall of Famer Chris Cormier has become a revered analyst in the community, who regularly offers insight into the sport. In a recent appearance on Prime Time Muscle by Muscle and Fitness, Cormier shared his thoughts on how Chris Bumstead’s coaching change will affect his mindset at Olympia.

Bumstead will look to make history by earning a fourth Olympia trophy. However, it will be the first time he enters the contest without his longtime coach and Men’s Open division standout Iain Valliere. Given the immense success they achieved working together, Valliere’s departure led to some speculation about Bumstead’s showing this year.

‘CBum’ crushed an intense chest workout in October and revealed that he joined forces with bodybuilding guru Hany Rambod to get ready for the most prestigious fitness event in the world.

Last month, Bumstead teamed up with Men’s Open competitor Hadi Choopan for a grueling back workout under the guidance of their coach Rambod. The pair used the FST-7 (Fascia Stretch Training) method developed by Rambod in preparations for the upcoming Olympia, scheduled for Dec. 15-18 at Planet Hollywood Resort & Casino in Las Vegas, Nevada.

In an appearance on Prime Time Muscle by Muscle and Fitness, Chris Cormier joined Tim Wilkins and Olympia judge Terrick El Guindy to talk about the impact of changing coaches so close to the 2022 Olympia for Chris Bumstead.

“It’s going to be a totally different mindset behind the preparations; what he does the morning of, what he fills up with as far as carbohydrates and protein. He’s probably going to ask him a lot to see what worked before, what foods he works well with leading up to a show. How fast it burns and how much it stays,” Cormier said.

“There’s a lot of pressure because god forbid something happens and this guy doesn’t win, all eyes are going to be on Hany Rambod,” El Guindy said. “Chris Bumstead is a different scenario.

He has his own supplement company, he’s a Mr. Olympia, he is the most popular guy so in terms of personality, Hany is going to have to take a different approach. This is not a guy you are building up.”

While some believe a coach can’t effectively focus on multiple athletes at a time, Cormier argued the contrary. He shared his experiences competing professionally when he was one of the many athletes under coach Chad Nicholls.

“When we all went to 99, it was myself, it was Flex, Ronnie, most of these guys were all in the top five and top four. Sometimes, it’ll take him 1.30 or so in the morning to get to my room but I’m just cool, calm, and collected.

I don’t let anything worry me or think too deep into that. He’s human, I’m sure he has a preference but I think he gave us all equal opportunity to win.”

Chris Bumstead recently shared the 2100-calorie diet he utilized to get ripped for the nearing Olympia. As the competition gets closer, his gym efforts continue to ramp up. All season, Bumstead has maintained an incredibly jacked physique.

Ramon Dino and Urs Kalecinski both pose a real threat to his reign in the Classic Physique category. Former Mr. Olympia winner Samir Bannout believes Ramon is the biggest challenge for Bumstead this year. On the other hand, Kalecinski, a friend/rival of Bumstead, is eyeing his first Olympia win and made no hesitations in declaring that they will be ‘enemies on the stage.’

RELATED: Chris Bumstead Shares His ‘Champion Mentality’ While In Prep for 2022 Olympia

Bumstead has been open about his mindset ahead of his next title defense. A few weeks ago, he shared how fired up he was to create history at Joe Weider’s 58th Olympia contest.