The bodybuilding legend shared a complete overview of his current protocol. 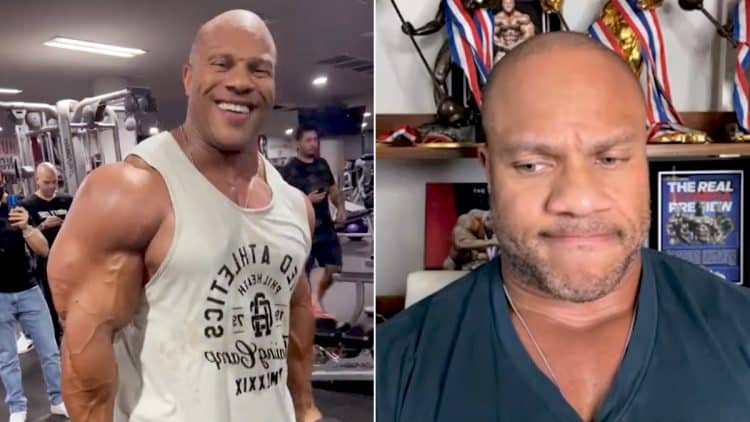 Seven-time Mr. Olympia Phil Heath reigned over the Men’s Open division for many years but stepped away from competing in 2020. During a recent video on the Muscular Development YouTube channel, Heath shared the cycle he’s been using while not competing at bodybuilding shows.

Given the shape Phil Heath has maintained since stepping away from competing, many believe he’s bound to return to the Mr. Olympia stage sooner or later. His 3D look, detailed muscle separation, and incredible upper body guided him to success at the highest level. Despite speculation about his return, four-time Mr. Olympia Jay Cutler has shot down these notions, suggesting that “The Gift” is done with competing for good.

Last month, Heath revealed that he would serve in the broadcast booth as a commentator for the 2022 Mr. Olympia contest. Even though Phil won’t be competing at the prestigious show this year, he still looks massive with a shredded physique. Maintaining quality muscle mass is no easy task, Phil and bodybuilders alike, routinely train, consume large quantities of food, and use supplementation to facilitate the process.

There is an ongoing discussion amongst the bodybuilding community about whether cycles should be ‘minimal,’ or intense. Three-time Classic Physique Olympia champion Chris Bumstead revealed that he’s taking a ‘decreased’ cycle and found success. Bodybuilding veteran Samir Bannout recently advocated for using fewer drugs after mentioning that Arnold Schwarzenegger looked his best with only two compounds.

Phil Heath Details his Current Bodybuilding Cycle: “I Wanted It to Be More Optimal”

“Right now… well this week is a little different. I’m just doing have of a sip three times a week. So that’s what, 100 every other day. So, I’m just doing that. Doing, DHEA, Prednisolone, I’m doing my Dihexa in the morning along with a little bit of T3 because my thyroid was low.

I wanted it more optimal. I was never on it as a competitor to be quite honest. It was always in range, but I always wanted it to be a little bit higher. Just because I knew that I was asking myself to do more in the morning,” says Phil Heath.

Phil says his combination of testosterone, DHEA, Prednisolone, Dihexa, and a little bit of T3 has helped him with his morning energy levels while staying away from caffeine.

“I didn’t have time to be groggy and I did not want to continue to be highly caffeinated. So that was something that I wanted to eliminate out of my diet. Since then, I haven’t really had to hit up coffee, Starbucks, nothing. Energy drinks — I still like the taste of them, but I just don’t have to do it.”

Heath provided a rundown of some of the other medications he’s currently taking.

“Also, the BPC 157, Thymosin beta 4, now, TB 500, they took it off the market, so I have to do that. Every now and then I run a little HCG, and then what else, oh, Tesamorelin and Ipamorelin at night. It’s more of a GH Serotone. So, it gives me that response but there’s something that I notice since we were talking about Growth. Growth puts on a lot of water to whereas this doesn’t, initially.”

While taking peptides, Phil noticed that it took a few months for most people using them to see results.

“It’s to get you on a path where you could take this for however long you want without damaging. It’s not like you have to cycle on cycle off some of these medications. That’s really the protocol right now,” Heath said. “And Glutathione injections. Those are so freaking important especially in today’s society, just trying to keep your immune system up.”

It’s unclear if/when the 42-year-old could make a competitive return, and his former coach, Hany Rambod, believes that road would be a difficult one to travel. Rambod doesn’t doubt Heath’s mindset or determination but believes he would have to present a better physique than all of his past appearances to tie Ronnie Coleman and Lee Haney‘s record of eight Olympia titles.

The former champion is dedicated to preserving his physique. Heath is committed to maintaining an impressive build even when he’s not preparing to compete at Mr. Olympia.