Kuclo sent a warning shot to former 212 champion Kamal Elgargni and anyone else who plans to stand against him on the Texas stage this weekend. 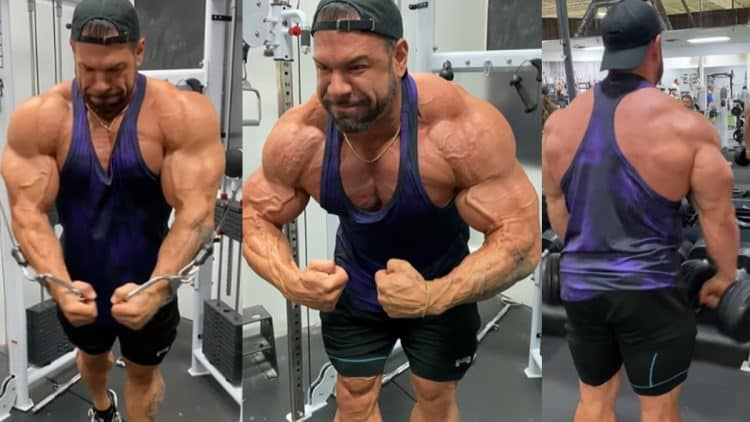 Top Men’s Open bodybuilder Steve Kuclo is ready to earn his Olympia invitation this weekend with one of his sharpest packages to date. In a recent update made to Instagram, Kuclo showed off his shredded physique ahead of the 2022 Texas Pro.

Steve Kuclo made a name for himself in the IFBB Pro League with a monstrous build and even proportions. He has a proven track record against elite talent and has been competing at the sport’s highest level for over a decade.

Mass monster Kuclo has done exceptionally well as a Men’s Open competitor. For the past two years, Steve hasn’t dipped below third place at any bodybuilding show. In 2021, Steve was runner-up at the Texas Pro show to Iain Valliere. After earning third place at the 2021 Arnold Classic behind Valliere and champion Nick “The Mutant” Walker, fans started paying close attention to Kuclo’s impact on the division.

The following year, Kuclo presented one of his most vascular looks yet, and garnered a lot of excitement ahead of the 2022 Arnold Classic. At the show, he struggled to contend with the fullness and roundness of former 2020 Arnold Classic champion William Bonac, who took second. Despite his superb muscle maturity, Steve finished the show behind Bonac and two-time Arnold champion Brandon Curry. His last show resulted in another third place finish at the 2022 Boston Pro.

Steve has yet to earn his invitation to compete at 2022 Mr. Olympia. The marquee show is scheduled to kick off on December 15th to 18th in Las Vegas, Nevada. Should Kuclo secure the victory this weekend at the highly competitive show, this will be Steve’s seventh time qualifying for Olympia.

In a post made to Instagram on Tuesday, Steve Kuclo gave fans a sneak peek into the package he plans to bring to the 2022 Texas Pro, scheduled to take place August 12th-13th.

During the video, Kuclo can be seen practicing a cable exercise and then flexing for a most muscular pose. He switched to a dumbbell exercise next, before focusing the camera on his massive back.

This isn’t Kuclo’s first impressive physique update ahead of his appearance in Texas. The bodybuilder turned heads recently with his upper body after sharing his progress last week. Steve’s arms, notably his triceps, look bigger than ever, and he plans to use that weapon against a stiff lineup of talent expected in Texas.

Kuclo will be tasked with facing former 212 Olympia champion Kamal Elgargni, who made his Open class debut in second place at the Tampa Pro last weekend to winner Akim Williams. Elgargni announced his plan was to compete in Tampa, Texas, and then finally at the Ronnie Coleman Classic, all of which will be in the Men’s Open division.

Newly turned IFBB Pro Andrew Jacked also plans to push Kuclo on stage this weekend. Andrew is coached by bodybuilding legend Flex Wheeler, who recently guided the new school bodybuilder through a detailed posing routine. During the posing lesson, Jacked revealed his weight is sitting at 290-pounds. Given that overall size is one of Kuclo’s most lethal weapons on stage, it will be interesting to see how Jacked compares to the veteran.

With a handful of competitors vying for their Olympia qualification this weekend, the Texas Pro is expected to be one of the most competitive events yet. Steve Kuclo is dialed in and ready to deliver his first victory since claiming gold at the 2019 Indy Pro.