Walker passes another milestone in training as he aims to win the 2022 Mr. Olympia crown. 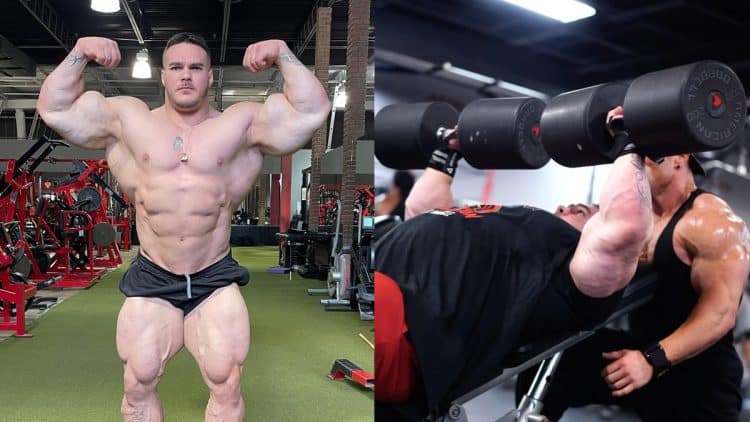 It is encouraging to see that Nick Walker, the winner of the 2021 Arnold Classic, has been working diligently with new coach Dominick Mutascio and is making rapid progress in the gym in preparation for the 2022 Olympia. The event will take place from Dec. 16th to Dec. 18th In Las Vegas, Nevada. Walker is one of the highly touted names in the Open Pro division. He won the 2021 New York Pro and the 2021 Arnold Classic within a year of earning his IFBB Pro card. These wins guaranteed The Mutant a spot at the 2021 Olympia where he finished fifth.  After making steady progress in the off-season training, Nick Walker has recently kick-started his competition prep for the 2022 Olympia.

On August 9th, 2022, the 27-year-old shared a clip of him hitting a 200lbs incline dumbbell press for ten reps on social media. Walker has reiterated the benefits of doing the exercises with slow reps during many of his workout videos in the past and that’s exactly how he performed this set – with slow and controlled movements. Courtesy of Nick Walker’s personal Instagram account, you can watch him achieve the feat here:

Now we working,” Nick Walker wrote in the caption to his post.

As one of the most elite Open Pro competitors of this generation, Nick Walker is not a stranger to lifting heavy weights. Back in April, Nick Walker had posted videos of him doing a 200lbs Incline dumbbell press for six reps and a 185lbs Incline dumbbell press for 10 reps. Numbers show that the 27-year-old has definitely made huge progress in the months that passed by.

As Nick Walker strives to win the Olympia title, he is putting in a lot of effort

The bodybuilding community was expecting Nick Walker to defend the Arnold Classic title in 2022. Nevertheless, he chose to abstain from competing until the 2022 Olympia to improve his physique. Walker firmly believes that competition prep alone cannot guarantee competitive success. He has reiterated that off-season training gives you the most benefits while competition prep only improves upon it. On Aug.1st, The Mutant shared a chest workout video on his YouTube channel which marked the beginning of his 2022 Olympia competition prep.

While the 27-year-old has a much-improved physique now, winning the 2022 Olympia is a steep uphill climb as he will go up against the likes of reigning Olympia king Mamdouh ‘Big Ramy’ Elssbiay, Brandon Curry, and William Bonac to name a few. In a recent interview with Olympia TV, bodybuilding legend Shawn Ray opined that he would not be surprised if Walker cracks the Top three at 2022 Olympia. One of the major reasons he cited was that Walker is entering his absolute prime. However, the other competitors are aging veterans who are probably nearing the end of their careers.

Hunter Labrada is another top competitor with a potential to pull off an upset. The 2020 Tampa Pro winner finished fourth at the 2021 Olympia – one spot ahead of Walker. Labrada has looked phenomenal in his recent updates as well. Therefore, it is obvious that he will present a tough challenge to other top competitors.

Well, Nick Walker started his Professional bodybuilding career in style with two back-to-back pro wins. He went back to the drawing board when he felt the need to improve further. All things point to a champion’s mindset. Therefore, it will not at all be surprising if Walker cracked the top three or even won the 2022 Olympia crown.