Fans wonder where Roelly Winklaar's career stands after recently training in the company of Andrew Jacked and Sergio Oliva Jr. 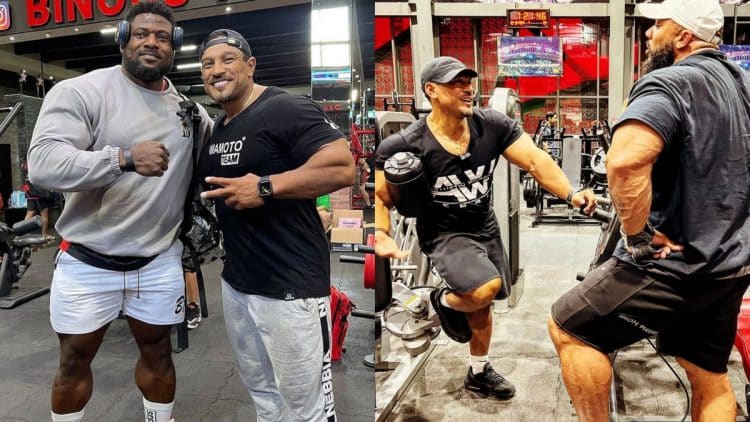 Dutch bodybuilding veteran Roelly Winklaar was a proven force during the height of his IFBB career. Similarly to 7x Mr. Olympia Phil Heath, Winklaar has incredible shoulders and arms that most of his professional peers can’t even come close to matching. In addition, Roelly has often been compared to the legendary Kevin Levrone, whose triceps and shoulders have been widely hailed as among the finest in history. The latest developments surrounding Winklaar have led many to wonder if he decided to move on from competing. In the recent postings, Roelly Winklaar, who trained Sergio Oliva Jr. and posed with Andrew Jacked, appears to have been downsized.

Winklaar first gained attention for a prolific mix of size and conditioning that made him stand out on the stage. He was renowned for his strong work ethic that helped him take on some of the freakiest mass monsters in the Men’s Open division for most of his career. ’The Beast’ was a regular fixture at the biggest show in bodybuilding, having placed in the top-ten at Olympia a number of times.

His best showing came at the 2018 Mr. Olympia, where he placed third behind legendary bodybuilder Phil Heath and winner, the late Shawn Rhoden. Although he did not take the top prize home, he got his first-ever People’s Champ award. Roelly was an active competitor and continued his quest for gold the next year but finished fifth at the 2019 Mr. Olympia. Shortly after the result, he secured a win at the Yamamoto Cup.

Winklaar took a brief hiatus to work on bringing an improved package for the next season. Last year (2021) was a hard year for Roelly as he reached the podium only twice, getting second-place finishes at both the 2021 Europa Pro Championships and the Yamamoto Cup.

At the 2021 Olympia, Winklaar placed 11th. He made his final appearance at the 2021 Romania Pro and got a ninth-place finish in the Open division to wrap up the busy season.

On his Instagram account, Andrew Jacked posted a picture of himself standing next to Winklaar, who appears to have lost considerable weight since the last competition. Roelly has not indicated whether he will retire or continue to compete next year.

“Crazy week it’s been here in Dubai with lots of athletes and stars but not crazier than seeing my Big Brother the man the legend @roellywinklaar back in town,” Jacked wrote. “Yesszzziirrr !!!”

As seen in another Instagram post by Sergio Oliva Jr., Roelly Winklaar guides him through chest exercises. Sergio looks like a giant compared to Winklaar, who seems to have lost muscle mass during the off-season.

“Doing my Beast Learning from the Beast,” wrote Oliva Jr.

While Winklaar’s status as an active competitor remains to be seen, it is clear he is not stepping away from the sport completely. The 45-year-old also coaches other Open participants in his spare time and recently guided William Bonac through a brutal shoulder workout in prep for the upcoming 2022 Olympia, scheduled for Dec. 15-18 at Planet Hollywood Resort & Casino in Las Vegas, Nevada.

Winklaar hasn’t made it clear which direction he plans on taking his career. After seeing some of Winklaar’s recent updates, it would appear that he may prefer coaching elite-level talent rather than putting himself through the rigors of another bodybuilding season.

For the past few months, bodybuilding fans have wondered about Roelly Winklaar's retirement status after noticeably downsizing. Recently, Winklaar underwent...

Andrew Jacked is on a quest to realize his Mr. Olympia dream in the first year of his pro bodybuilding...