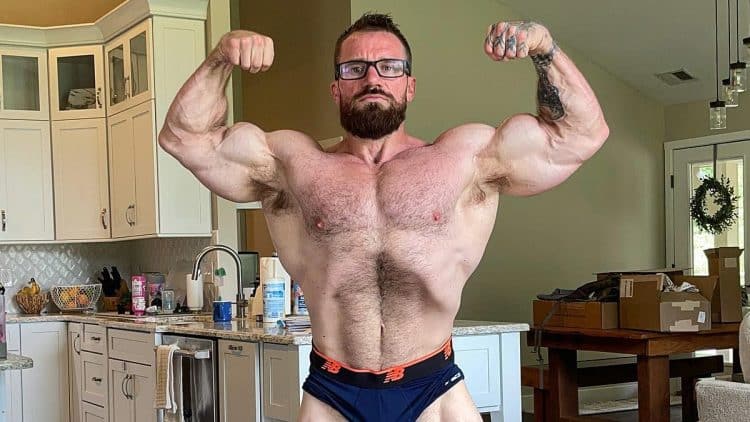 Seth Feroce is killin’ it in the gym to maintain a prime form. Feroce is a popular professional bodybuilder from the 2000s era. Over a decade into retirement, Feroce follows a rigorous training routine and strives to achieve the highest level of fitness. He is a prominent voice in the industry and has been a vocal critic of bodybuilding lifestyle and steroid use.

Feroce admits that his physique looked a lot better when he trained for bodybuilding. However, he turned towards high-intensity functional training a few years back to look as well as feel good. Feroce felt the need to incorporate weight training back into his workout routine for complete development. A few months ago, Feroce opened up about a health scare that had him in serious trouble. He also admitted that not competing enough was the biggest regret he had. The 39-year-old is considering a professional comeback and he is training like a bodybuilder to prepare for the same.

Recently, Seth Feroce shared an arms workout on his YouTube channel and shared some useful training tips as he went. The workout consisted of antagonistic supersets of biceps and triceps exercises. Without further delay, let’s examine the details of this training session.

Feroce started the training session with rope pushdown to warm up the arms and the elbow joint. Elbows are a crucial joint that is involved in almost every arm movement. So warming it up at the beginning of the workout is of utmost importance to avoid injuries.

“I’m old. I need to warm up. But for all my workouts, I always train for fifteen minutes, always. The goal is to push as much blood in my arms as possible with the least amount of strain on my joints,” Feroce stated.

Feroce stated that he does not count the number of reps, sets or anything else during the warm-up sets. Warming up the muscles and joints is the only goal. After pushing sufficient blood into his triceps with rope pushdowns, Feroce took to the next exercise for warming up the biceps. 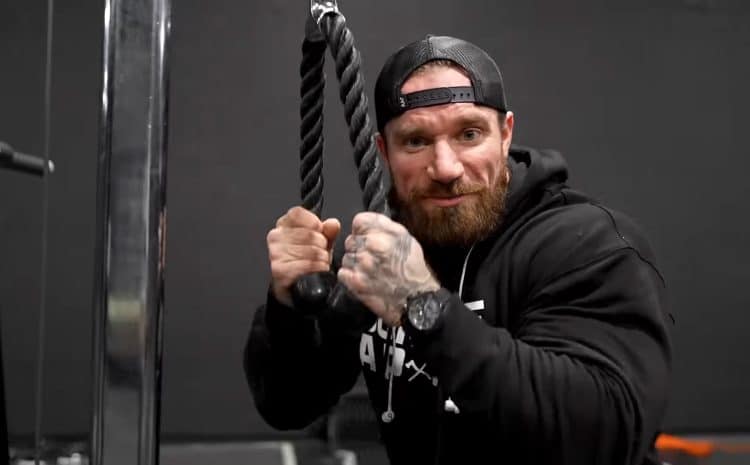 Feroce took to the seated cable curls next and did this exercise until he felt the biceps were sufficiently warmed up for the heavier arms exercises that followed.

Feroce feels that most young people don’t give a lot of importance to the brachialis muscles in the arms. He took to the alternating dumbbell hammer curls next to work this muscle for building ‘thick, full biceps’. Feroce did the regular hammer curls first and as his arms got tired he performed other variations like cross-body hammer curls.

“Just make sure that the goal is to exhaust as much energy as possible during this process. At least that’s what I like to do,” Feroce stated. 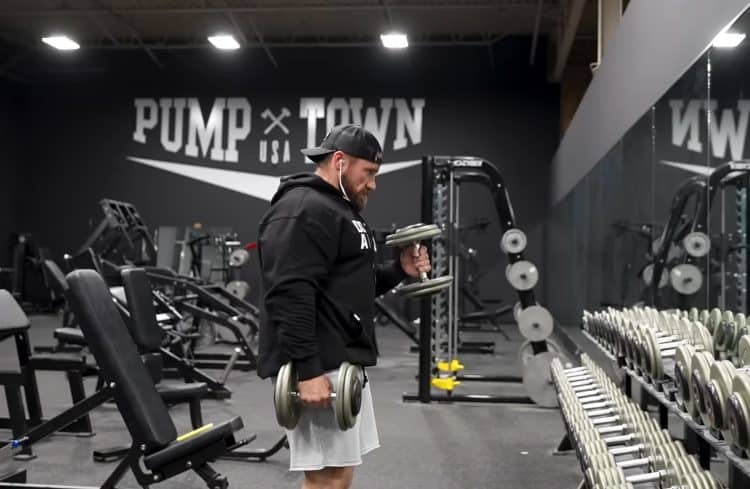 He superset the hammer curls with the V-bar cable pushdowns. Feroce performed one warm-up set of each exercise followed by three to four working sets.

“My arms are going to be torched. I can already feel them,” Feroce joked.

Feroce took to another superset to work the arms. He performed the EZ bar curls to work the biceps, coupling it with the dumbbell overhead triceps extensions for triceps. This exercise primarily works the long head of the triceps and it is one of the closest to Feroce’s heart. The retired bodybuilder used this as a staple for triceps during the early days of his bodybuilding journey. He attributes a lot of his triceps development to the dumbbell overhead triceps extensions. 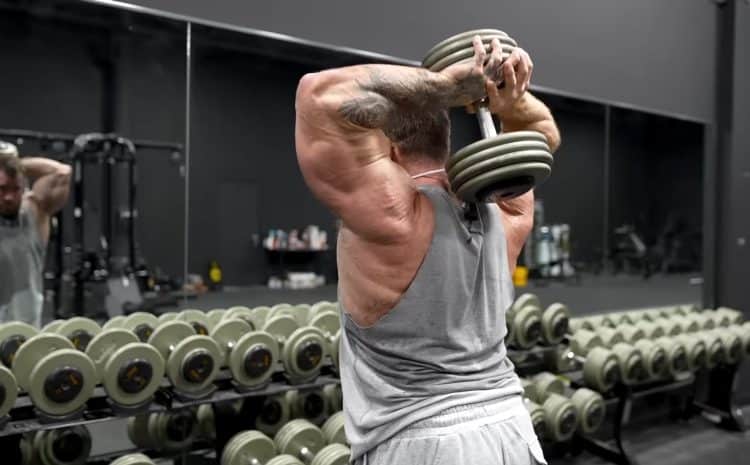 Feroce did three to four working sets of each exercise in rapid succession with minimal rest periods between to increase the aerobic intensity of the exercise. He maintained an 8 to 12 rep range for all the sets.

“You have to find that threshold and push that motherf****r. Not bust through it but push that bi***. So that is the goal here. You want to be controlled motherf****ing chaos in the gym,” Seth Feroce added.

Feroce next took to this superset for working the biceps and triceps. While speaking about the incline dumbbell curls, he said:

“I absolutely f***ing hate incline dumbbell curls. My most hated exercise for biceps. However, they do work and they are effective. So we’re going to do them.” 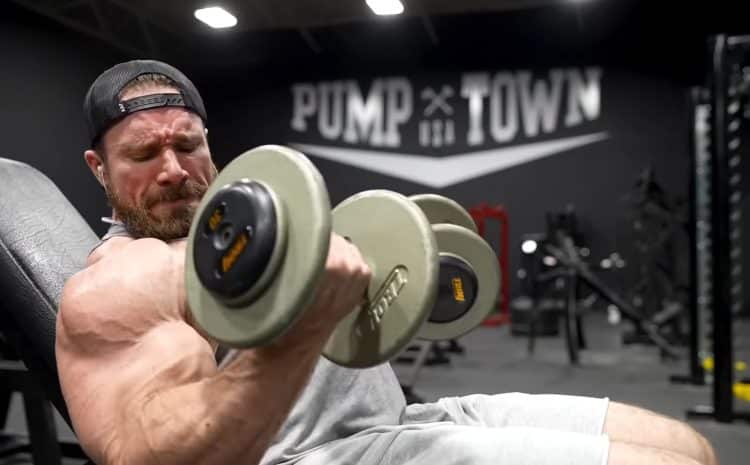 Feroce got all the sets of these exercises under his belt and moved on to the final exercises of the session.

Seth Feroce wrapped up the training session with a couple of sets of these exercises to add the last bit of stimulus into his arms. 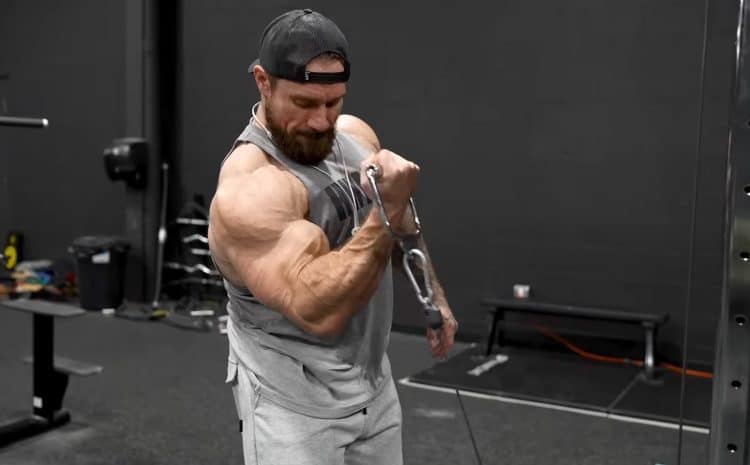 Feroce explained the method and reasons for doing these ‘burnout sets’ and said:

“The whole goal is to just fatigue ourselves but I’m not just doing the pumps, I want to feel the contraction each time. As we continue through each set, you’ll see I’ll begin to fail and I won’t be able to get that full contraction. That’s okay. Work on the partials and then the negatives but we want to get as many full contraction reps as possible.”

After performing all the sets of these exercises, Seth Feroce wrapped up the training session.

Seth Feroce’s passion for bodybuilding and fitness has not faded one single bit after retirement. In fact, his drive to become the best version of himself has only intensified and he is training with a new approach that is not only focused on aesthetics but also on functional strength.

With his high-energy workouts, the retired bodybuilder continues to remain a source of workout motivation for millions around the world.