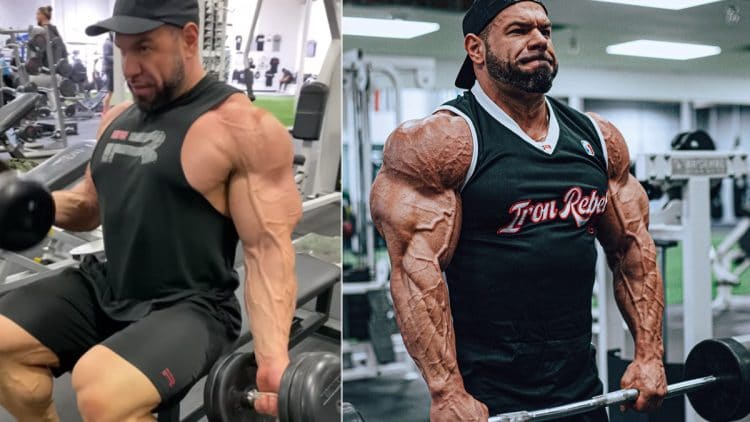 Looking to improve upon his third-place performance at the 2021 Arnold Classic, bodybuilder Steve Kuclo is in the midst of intense preparations for the second biggest show of the year. “King Snake” shared a physique update recently on his Instagram page, and his conditioning looks stellar ahead of the 2022 Arnold.

The Arnold Classic is set to go down on March 3-6 at the Battelle Grand Ballroom of the Greater Columbus Convention Center in Columbus, OH. As the competition nears, competitors are getting ready to begin final preparations for the upcoming show.

Three Men’s Open competitors withdrew from the Arnold over the past month. Rafael Brandão bowed out of the competition in late Jan. for undisclosed reasons. Just a few weeks ago, Nathan De Asha and Mohamed Shaaban joined Brandão on the sidelines after both revealed injuries forced them out of competition.

Over the weekend, Kuclo showed some of his progress for the big show. The bodybuilder was seen practicing seated dumbbell bicep curls. While some athletes opt to keep their physiques hidden ahead of big shows, that isn’t the case for Kuclo. After making steady improvements to his aesthetic appearance, the bodybuilder has the chance to secure his first Arnold Classic title this year.

Steve Kuclo and His Competition History

With time dwindling until the 2022 Arnold Classic, Kuclo shared a physique update on his Instagram page. The bodybuilder’s vascularity looks off the charts this year.

In 2018, Kuclo made his first Arnold appearance and came in fifth place. Kuclo earned victories at the Indy Pro show in 2018 and 2019. En route to Kuclo winning the pair of shows, it was obvious that he had a knack for posing on stage.

Next “King Snake” took his talents to Mr. Olympia where he secured sixth place. Kuclo only competed once in 2020 and it was at the Arnold Classic where he improved by placing in fourth.

Steve Kuclo had a solid 2021 season and competed in two shows which saw him reach the podium. First, he secured runner-up at the IFBB Texas Pro. Then, once again made improvements from his previous Arnold showing by placing third at the 2021 Arnold Classic. Of course, Nick Walker won first place after predicting he would, with Iain Valliere taking runner-up at the show. From sixth to fourth, to third place, Kuclo has elevated his game for the Arnold year after year.

At the 2022 Arnold, Kuclo will be up against a murderers’ row of bodybuilders. 2019 Mr. Olympia and Arnold Classic winner Brandon Curry will be in attendance looking to re-establish himself as number one in the world. In addition, 2020 Mr. Olympia winner William Bonac will also be vying for gold. The Arnold show is especially important for Kuclo as a victory here would guarantee him an invitation to this year’s Olympia.

The 2022 Arnold Classic is almost here and Kuclo’s physique update looks very promising. Granted, competition will be fierce, at least Kuclo is bringing one of his best overall packages to the stage in just a few short weeks.