Jay Cutler ‘likes Big Ramy a lot’ but wants to see Brandon Curry reclaim the title and ‘change history’ at the 2022 Olympia. 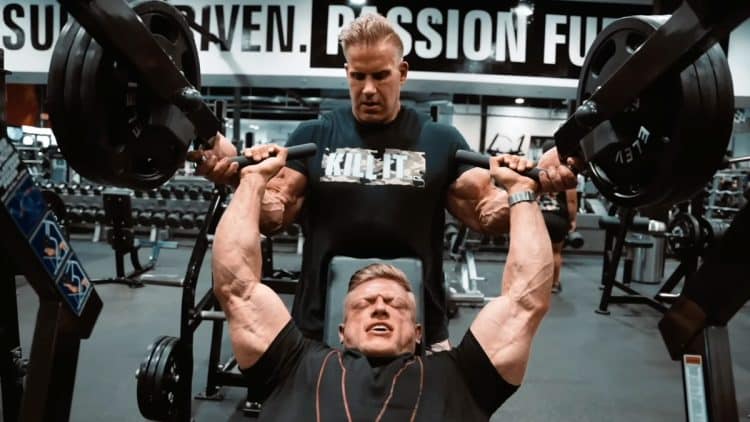 Bodybuilder Urs Kalecinski recently teamed up with 4-time Mr. Olympia winner Jay Cutler for putting in the final bit of work in his 2022 Olympia prep. Kalecinski is a German IFBB Pro bodybuilder that has shaken up the Classic Physique division at a relatively young age. The 24-year-old rallied to the fourth spot at the 2021 Olympia and carried the momentum into this year with a third-place finish at the 2022 Arnold Classic. Following this performance, The Miracle Bear earned impressive wins at the 2022 Boston Pro and the 2022 Kuwait Classic Pro. These wins cemented his spot at the 2022 Olympia.

Kalecinski stayed in Germany for the majority of his competition prep, barring an exceptional tour to the USA when he trained with the likes of Chris Bumstead, Nick Walker, and Terrence Ruffin to learn from them. The Miracle Bear has arrived on American shores for the 2022 Olympia. After training arms with Regan Grimes, he joined legendary bodybuilder Jay Cutler for a shoulder and triceps workout.

Cutler is best known for dethroning eight-time Mr. Olympia Ronnie Coleman to win the title at the 2006 Olympia. He won the title three more times at 2007, 2009, and 2010 Olympia. The 49-year-old retired from bodybuilding in 2013 but has maintained a rigorous training routine. Also, Cutler has become a prominent voice for the sport with his Cutler Cast podcast.

Kalecinski and Cutler went through the shoulder and triceps workout with intensity and focus. The video of this session was posted on Kalecinski’s personal YouTube channel. So without further delay, let’s take a closer look at the detailed account of this session.

The duo started the workout with this movement to target the side delts. Doing this exercise in a seated position negates the need to stabilize the core and helps focus more on the deltoids. As Cutler did the sets with furious intensity, his training partner could not help but be amazed.

“All of the old-school guys… when I’m training with Marcus… He’s not bit**ing around!” Kalecinksi exclaimed.

Cutler and Kalecinski got a few sets of this exercise under the belt and took to a front delt movement next.

The machine overhead press was the first compound movement of the day and targeted the anterior deltoid muscles. The Miracle Bear and Cutler used a plate-loaded machine for the exercise. Kalecinksi was curious how Jay Cutler pushed through so much training volume during the peak of his bodybuilding career and asked the retired champ to expand on the same. Cutler replied:

“I didn’t train to failure. Like I see… consider you’re training to failure, my reps weren’t pushed to that. So my recovery was a little faster. So if you train like this (to failure) the volume can’t be crazy like that coz it’s hard to repair. You can imagine the food I ate and the rest I took was important, right? I would sleep eight to ten hours at night…”

After pushing through a few heavy sets of machine overhead press, the training partners took to another side delt movement.

Cutler shifted the focus on side delts next and moved on to a cable machine for doing lateral raises. The cable machines put the muscles under tension throughout the range of motion and help bring about hypertrophy more effectively. Kalecinski noted that Cutler does not like to waste time in unnecessarily long rest periods, he could not help but appreciate it.

Cutler and Kalecinksi did a few sets of this exercise and took to a free weight movement next.

The incline position in this exercise takes the jerking movement and momentum out of the equation and forces the deltoid muscles to lift the weight without assistance. Cutler and Kalecinksi took to this exercise and got a few solid sets under the belt.

While most people tend to focus more on the anterior and the side delts, rear delts / posterior deltoids often miss the attention. Being professional bodybuilders, Kalecinksi and Cutler know the potential ramifications of having an underdeveloped muscle group. They took to this ear delt specific movement next and pushed through a few sets.

After getting enough stimulus in the shoulders, the bodybuilder duo worked the triceps next and started with kneeling triceps rope pushdown. Jay Cutler gave valuable advice to Urs Kalecinski at this stage of his competition prep and told him to focus on posing a lot more than training itself.

“Remember, it’s not about the weight at this point… Depleting the muscle, getting a little fiber work and then re-feeding it right? You’re just priming the body down. Posing is more important than training right now…” Jay Cutler advised Urs Kalecinski.

Cutler and Kalecinksi performed the triceps dip press next to work the triceps further. JayCutler is one of the prominent voices in the sport of bodybuilding and his opinions matter to those in the industry. During the rest period, Urs Kalecinski asked the veteran bodybuilder how he sees the Classic Physique division play out. Cutler replied:

“The top two have been the same top two for a minute. So, we gotta see you… Predictions suck! Because one year I was eighth and then… Almost… I was second. I would love to see that again.”

Cutler spoke about the Men’s Open division also and said he would like to see Brandon Curry take the title back.

“I’d also love to see Brandon do what I did and come back and win it again and change history. I was the only one that did it. It’d be nice too. But I want to see Ramy also. I like Ramy a lot…” Jay Cutler said.

While it is not possible to work a specific part of a muscle with an exercise, different variations can emphasize one part more than the other. Overhead triceps movements put more emphasis on the long head of the triceps and hence it is important to incorporate them into the routine. Kalecinski and Cutler performed the incline overhead cable triceps extensions next and took to another overhead movement next.

The duo took to the overhead cable triceps extensions next and did this exercise unilaterally. Following this, Cutler and Kalecinksi performed the final exercise of the day.

Full elbow flexion and stability in the shoulder joint are necessary criteria for triceps activation. The cable triceps extension is one of the most effective triceps isolation exercises in this regard. Kalecinksi and Cutler got a few sets of this movement under their belt and wrapped up the training session.

Urs Kalecinski has transformed into a whole new version of himself since the previous year’s Olympia. As Jay Cutler pointed out, Chris Bumstead and Terrence Ruffin have occupied the top spots in the Classic Physique division for a while now. Urs Kalecinski’s physique has certainly developed to a level where he can pose a serious threat to them both. It will be interesting to see if he can finish the Herculean task when the results are announced on Dec. 18.