Kalecinski hopes to challenge for the throne at 2022 Olympia after bringing up his back and arms: 'my training performance is better, everything is better.' 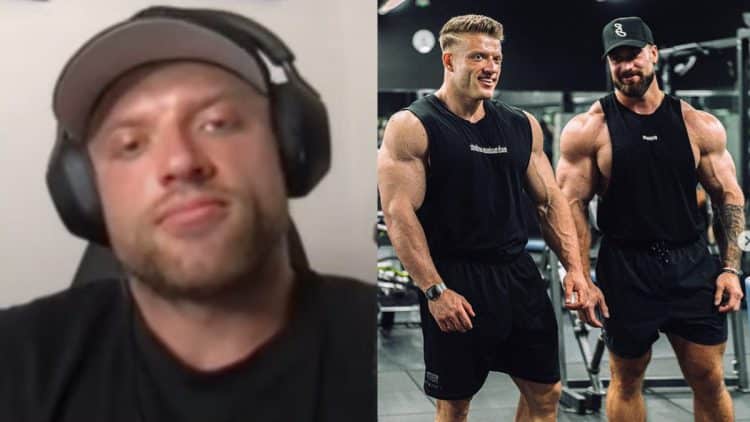 Classic Physique’s Urs Kalecinski plans on making another statement when he takes his talents to the 2022 Mr. Olympia contest this December. In a recent episode of Bro Chat, Kalecinski discussed his expectations for the show before breaking down the Men’s Open lineup.

“With the top six [in Classic Physique], I don’t want to sound arrogant or something like this, but I know for myself, I worked my ass off,” Urs Kalecinski said while reflecting on his prep.

Earlier this year, Kalecinski left the world astonished after a resounding 2022 Arnold Classic performance. While he wasn’t able to claim the title in Ohio, he proved himself in third place against elite competitors like two-time Classic Physique Olympia Breon Ansley, runner-up Ramon Rocha Queiroz, and two-time Arnold champion Terrence Ruffin.

Just a week later, the German native flew to the east coast for the 2022 Boston Pro. He won the contest handily, and in the process, sparked discussions in the sport about Classic Physique’s growing popularity. After all, in Boston, the Classic Physique division was showcased last instead of Men’s Open, which is usually reserved as the headliner at bodybuilding contests.

Kalecinski has been open about his training during the off-season and contest prep. He joined hands with Men’s Open Boston Pro winner William Bonac, who guided/coached Urs in Amsterdam, Netherlands, in May for a grueling leg workout.

In addition to Bonac, Urs traveled to America and trained with just about every Classic Physique Olympia contender there is. Last month, he collaborated with Ruffin for a demanding push workout and posing routine.

A few weeks later, he linked up with three-time Classic Physique Olympia Chris Bumstead to build arms and shoulders. To pack on the necessary mass to contend with the best in his division, Kalecinski utilized a 3,500-calorie diet this year. In his latest endeavor, the rising star joined Fouad Abiad to discuss his current prep and who he believes will dominate in the Open class at 2022 Olympia.

Urs Kalecinski Opens Up On 2022 Mr. Olympia Improvements: ‘Definitely My Arms and Back’

During the recent Bro Chat podcast, Kalecinski discussed his prep for this year’s Olympia. As it stands, he says things are going better than ever.

Additionally, Kalecinski revealed that he’s taking less steroids for 2022 Olympia than he did for the Arnold Classic a few months ago.

“Last podcast, I said to you, ‘I’m on 1800 calories.’ I think it was for the Arnold prep and 90 minutes of cadio every day. Every fuc**ng day. I had more drugs in me than now [during] the Olympia prep. It’s just in my head. I don’t know what it is. My training performance is better, everything is better and I don’t know why,” Urs Kalecinski said.

Kalecinski is confident he’s going to improve from placing fourth at the 2021 Olympia.

“Right now, this year, also in the Open — if you miss the form [just by] five or ten percent, you can be placed the last one. Especially the top ten in the Classic is so close to each other.”

While preparing for his second-ever Mr. Olympia show, Kalecinki specified that his arms and back have grown from last year.

“Definitely my arms and my back,” Kalecinski said. “Yeah, legs I didn’t really have an issue [with]. I’ve really worked on my back and my arms. I think especially the back, and the conditioning of the back, and the lower back improved a lot because I got denser and got more lower lats.”

“You need to create the look you want to achieve in my eyes. So, if judges say, ‘hey, you need a freaky body part,’ and me — I like aesthetics and overall perfect proportions. That’s what I’m working for.”

He acknowledged the value of having a ‘freaky body part’ like Nick Walker‘s arms but said those ‘over developments’ can also cause imbalances.

“Maybe you can win one or two poses [with one freaky body part] if you have really outstanding poses, like huge arms — a front double and a side chest for example but when the arms are huge like this, if you look at Nick [Walker] and he does the front double, you just see huge arms. The upper body falls apart a little bit. From the backside, he also has a great back, but the arms are so over-developed.”

Before discussing the Men’s Open lineup for 2022 Olympia, Urs shared that most Open class bodybuilders have said they looked their best at their lightest weight.

“With a lot of Open professionals, like you [Fouad Abiad], they say they looked their best when they were lighter,” says Kalecinski. “

Kalecinski loves the Open class and gave his thoughts on training with William Bonac ahead of 2022 Olympia.

“I love Open bodybuilding. In my little young heart, I’m an Open guy,” laughs Kalecinski. “Ramy first, Brandon second, Bonac third. Of course, I saw him guest posing today. We love to connect with each other — I visit him in the Netherlands. We train together. Since then, we’re talking a lot.

He’s not the guy who’s posing a lot of stuff. Talking a lot. Brandon also, he’s more like the old school not social media guy. Oftentimes, everybody is going to hype and forget about these guys. He’s [Bonac] really working hard,” Kalecinski shared.

While he isn’t ready to count out the reigning two-time Mr. Olympia Mamdouh ‘Big Ramy’ Elssbiay or Brandon Curry, he does expect Bonac to steal Hadi Choopan’s third place spot from last year.

“Fourth is Hadi [Choopan] for me. Then Hunter [Larbrada] in fifth. Then Nick [Walker] sixth. Then Samson [Dauda], Iain Valliere, and Derek [Lunsford] and Andrew [Jacked].”

The last time fans heard from Kalecinski, he was smashing an old-school arms and shoulders workout. He returned to his home country of Germany this week to finalize preparations for his next Olympia contest. His improved biceps were on full display during the training session.

RELATED: Urs Kalecinski Uses Muscle-Mind Connection To Build A Wider And Thicker Back Ahead of 2022 Olympia

Many expect this year’s Olympia contest to be one of the greatest ever. Should Kalecinski bring his desired combination of aesthetics and balance, the Classic Physique star is confident he’ll shock the world in December.