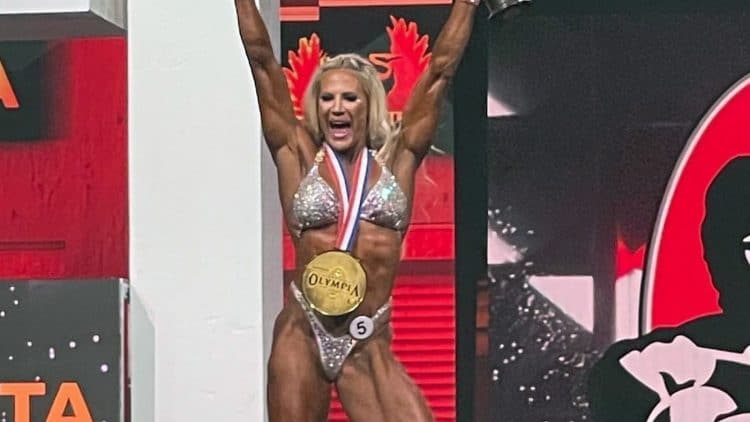 Whitney Jones has done it again. She has reclaimed her Fitness Olympia throne against all odds. She could not compete at the Arnold Classic because of a COVID-19 scare.

According to people in the know, the Fitness division is one of the hardest divisions in the sport. And thanks to fancy outfits and choreographed routines, it is one of the most entertaining divisions as well.

While competing in the Fitness division, an athlete must go through:

What is so surprising, you ask?

There was no Oksana Grishina. Meaning – 2021 could be the first time since 2012, that Grishina didn’t place in the top 5 at the Olympia. If this does not make it to the headlines, we don’t know what would.

Whitney Jones, mom of two, missed performing at Arnold Classic because she tested positive for COVID-19. In the Olympia presser, she said she wasn’t upset with missing out on Arnold Classic because she believed she was saving herself for the Fitness Olympia 2021. Her first place finish was no surprise given the package she brought to the Fitness Olympia stage.

We thought it would be impossible to outdo Oksana Grishina’s Joker performance, but Missy proved us wrong. Her angles wings stole the show. Her performance though should come with a disclaimer – Do not try these stunts at home. Perfectly choreographed and bang on the money, Missy deserved the second place finish.

Oksana Grishina came back as the freaking joker. She made up in the fitness routine the points she might have lost in the pre-judging round.

We guess not including Oksana in the top 5 atheletes in the final callouts was just to turn up excitement. It’s good to see Oksana amongst the top three at the Fitness Olympia.

Ariel Khadr is a gymnast and a black belt in taekwondo. Strong as a bull, she did some crazy handstand moves.

Jaclyn Baker opened the Finals with a mind-blowing performance, and was a strong contender for the Fitness Olympia 2021 title.

Do you agree with the Fitness Olympia 2021 results? Who do you think should have won the title? Let us know by tagging us on social media and in the comments below.