Bonac is making sure his signature muscle density remains one of his best weapons for this year's Mr. Olympia contest. 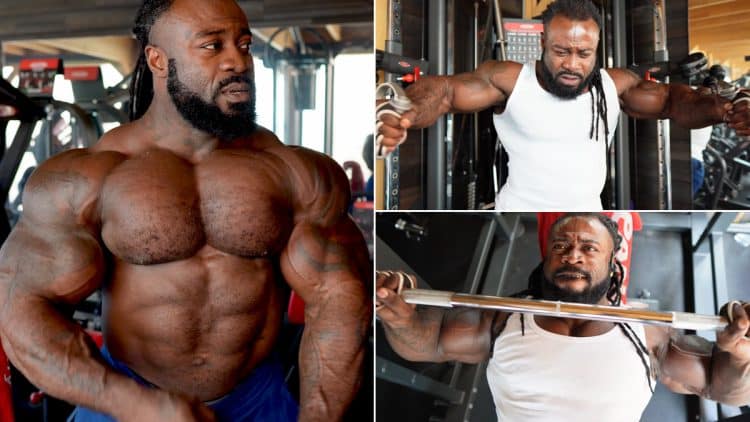 William Bonac, a Men’s Open frontrunner, is ramping up his preparations for the current season. In a recent YouTube video, Bonac shared a grueling chest workout he’s using to prepare for 2022 Mr. Olympia, scheduled to take place December 15 – 18, in Las Vegas, Nevada.

Bonac has remained a notable threat in the IFBB Pro League for the past few years. In 2019, he was narrowly defeated by Mr. Olympia champion Brandon Curry. His muscle density, conditioning, and huge arms nearly stole the show, and he intends to use those weapons later this year to exact his revenge.

After failing to capture a Sandow trophy, Bonac quickly dusted himself off and won the crown at the 2020 Arnold Classic. He attempted Olympia in 2020 as well but finished fifth. A year later, he found himself on the Olympia stage again, however, was unable to improve from the year prior. Bonac finished 2021 Mr. Olympia in sixth place.

While he was unable to defend his title in Ohio last year, Bonac made up for his absence a few months ago, when he nearly won the 2022 Arnold Classic. Curry’s shape and aesthetics saw him claim victory, but many believe Bonac should have won the contest. Nevertheless, Bonac didn’t stop there. He entered the Boston Pro a week later and won.

Following his Boston Pro victory, Bonac vowed to fix his washed-out abs and gyno since some in the community believe that was the reason why he lost the 2022 AC. He added that he doesn’t plan on making any excuses when he competes at Olympia later this year. With vengeance on his mind, Bonac is training in hopes of bringing his career’s best package this winter.

Check Out How William Bonac Builds His Chest For 2022 Mr. Olympia

Bonac starts with machine cable crossovers. He began with a warm-up set.

“I’m going to start with these over here — cable cross. I’m not going to cross over down but straight — so coming to my chest,” says William Bonac. “Kind of a warm-up set. Now, I’m going to increase the weight and go for another one.”

For his second exercise, Bonac explains why he favors the incline flat bench press. He says it taxes his upper chest which he says is important for keeping the balance of his physique.

“The next exercise is flat bench press,” says Bonac. “[I do incline] because it’s for my upper chest. I do them because mine is undeveloped — it doesn’t match with the total of my chest. I need to bring it up more. When you train chest, you need to hit it from every angle, you understand. I want the ball over here [points to pec] so that I can put a glass on it.”

“I use my muscle, strength and energy during the incline.”

Bonac switches to decline bench presses next. He shared that he saves a lot of time by performing exercises with minor variations.

“All the fibers are fired up. Sometimes, I can just walk on the street, and I just see it [my biceps] twitching.”

After a very brief rest period, Bonac completes a set on the standing machine chest pec/fly.

Before getting to the heavy weight, Bonac says to always warm up. He finished his chest workout with a great pump.

“I’m done with my chest workout,” Bonac said. “It felt great. Pump was great. Normally, when I train my chest, I have a lot of pain and join pain in my elbows. At this moment, since I started my off-season prep, I don’t have any issues with that anymore. I’m pretty happy with that.”

Ending the workout, Bonac took off his pump cover and gave fans a teaser of the package he’s sharpening in preparation for 2022 Mr. Olympia.

“The Conqueror” revealed that he plans on playing the size game against reigning two-time Mr. Olympia Big Ramy. Bonac has kept fans updated on his progress for this year’s Olympia contest. At the end of his off-season, Bonac was tipping the scales at a massive 264.6 pounds.

While many predict Ramy to win his third title later this year, four-time Mr. Olympia Jay Cutler has warned others not to count out William Bonac or Curry. He believes Bonac is sure to do some damage against other Men’s Open competitors when he makes it to Las Vegas.

Bonac intends to win the rematch against Brandon Curry en route to his first Mr. Olympia title. Given his latest chest workout, William plans on bringing a bullet-proof upper body.

You can watch the full training video below: