Check out how these bodybuilders have managed to stay in shape since stepping away from the sport. 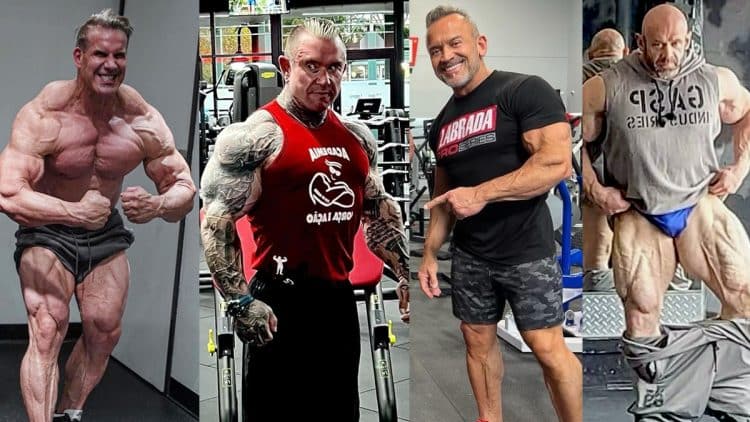 The passion bodybuilders have for their craft often bleeds into retirement. While some believe the sport does not lend itself to longevity, today we’re looking at a list of bodybuilders who have managed to defy Father Time with jacked physiques in retirement.

It’s no secret that the sport of bodybuilding comes with great risks and great rewards. Bodybuilding at the highest level requires dedication when building a showstopping physique. Athletes use various forms of supplementation, diet, and intense training to present their best look on stage.

These sacrifices can arguably affect the health of a bodybuilder, and sometimes lead to death. In 2021, bodybuilders began passing away at a concerning rate. Last year, former Mr. Olympia Shawn Rhoden, George Peterson, and Mike Horn all died from heart attacks or heart complications.

Despite the community being on high alert, untimely deaths continued to shake the sport’s foundation. March saw infamous steroid-enthusiast Bostin Loyd die at 29 from an aortic dissection before Arnold Classic winner Cedric McMillan passed away (a cause of death has yet to be made public). Just this week, Doug Brignole died at 63.

Sporting icons like Arnold Schwarzenegger admit that bodybuilding is the most dangerous sport in the world. He believes athletes are taking drugs nowadays that are damaging their health so much that people are dying. However, there’s a list of athletes (Schwarzenegger included) who have prioritized their health and are still thriving in retirement today.

Take a look at 11 bodybuilders who have kept some of their gains after retiring from the sport.

Wolf led a successful career in the IFBB Pro League with remarkable size though retired in 2018. While he isn’t holding the same mass he once was, Wolf still pushes the pace in retirement. At the end of May, he shared a trimmed-down physique update, and it’s evident he’s taking care of his health since stepping away from the stage.

“The Blade” is celebrated for not just his longevity, but the strength of schedule he maintained throughout his lengthy career. Jackson has recorded over 25 professional victories and won the Mr. Olympia title in 2008.

He routinely shares updates with his followers and still looks great today with a lean physique. In 2012, Dexter Jackson won the Masters Olympia contest. The ageless wonder retired in 2020 following a ninth place finish at Olympia.

Father of Hunter Labrada, Lee developed a reputation in the league for his work ethic and impressive posing skills. Lee performed at Olympia contests for much of his career. In that time, he placed in the top four at Olympia for seven years in-a-row. He no longer competes after retiring in 1995 but that hasn’t held him back from training.

At 62 years old, Lee looks ripped and doesn’t mind showing off how he managed to build such an impressive body. This week, he showed fans how he gets his legs shredded with the belt squat machine.

Jay Cutler is a living legend who maintains a great physique and busy schedule in retirement. The four-time Mr. Olympia winner trains with a different intensity since stepping away from competition. He equates training sessions to meditation now and admits his workouts have changed a lot since he no longer trains to ‘be big.’ Cutler retired in 2013.

While Rich Gaspari competed during the 1980s and 1990s, his love for bodybuilding hasn’t waned since retiring in 1996. “The Dragon Slayer” is a top three Olympia finisher. He enjoys discussing the sport and is revered for his jacked physique even though he no longer competes.

In addition to training and shaping up and coming talent like Martin Fitzwater, Warren still attacks the gym how he did during his prime. He’s known for his willingness to go for broke during training sessions — which helped him nearly win a Mr. Olympia title in 2009. He defeated Dexter Jackson at the contest but was unable to get past “The Comeback Kid” Cutler. Warren decided to retire in 2015.

“The Quadfather” Tom Platz is a Mr. Universe winner, who competed during the Golden Era. He’s shared the stage with legends like Arnold Schwarzenegger and eight-time Mr. Olympia Lee Haney. Platz revolutionized leg training with his tenacious training programs.

Previously, Platz has been open about his steroid use. He said without the drugs, he was unable to achieve that ‘saran wrap’ look that dominated the sport. He retired in 1987, though Tom still dons a ripped physique, which he’s accomplished with intense training and proper dieting.

The six-time Olympia winner Dorian Yates ruled the sport with sheer size and muscle density. He has discussed the sacrifices it took to maintain his status as a champion and revealed that he could have ‘gone easier’ on himself.

He’s stepped away from competing in 1997 but has kept himself in the headlines courtesy of his jacked physique at 60. He’s warned against steroids since retiring and opened up recently to Dennis James about taking micro-doses of testosterone.

Australia’s Lee Priest may have stopped competing, but he still trains with a chip on his shoulder. Earlier this year, he revealed that he was undergoing a physique transformation. Priest’s arms are massive, and his biceps rival some top-tier bodybuilders competing today.

When it comes to cycles and food, Preist says not to ‘over think it.’ While he’s mentioned that he has no intention of returning to a bodybuilding show, Lee would be an ideal competitor for the Masters Olympia event, if it ever comes back. Lee officially retired from the sport in 2014 (originally retired in 2007 but came back).

“The Austrian Oak” is still a force at 75 years old. He stopped competing after winning his seventh and final Sandow trophy at 1980 Mr. Olympia.

Arnold maintains his physique in retirement in addition to hosting the annual Arnold Sports Festival. Schwarzenegger recently turned heads after announcing he was charging $150,000 for private training lessons. But it’s for a good cause, as Arnold explained that all of the proceeds go toward a children’s charity he started in 1992.

IFBB Hall of Famer Kevin Levrone is considered to be one of the best bodybuilders from the 1990s. He won the Arnold Classic title twice and was a four-time Mr. Olympia runner-up back when he competed. Even though he no longer competes, the bodybuilder has kept in great shape for years.

At 58 years old, Levrone is still dedicated to maintaining a remarkable level of fitness. Levrone retired in 2003.

RELATED: Four Bodybuilders Who Are Still Ripped Even Over 60 Years Old

Longevity in a sport like bodybuilding is hard to come by. The sport can be dangerous, but these athletes show that healthy living after a storied career drastically impacts their wellbeing.