Life and Accomplishments of Yeon-woo Jhi 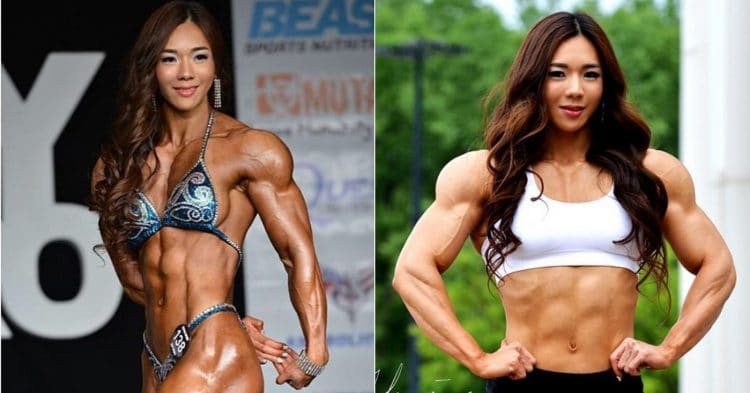 Yeon-woo Jhi is a South Korean bodybuilder and social media superstar. This is her life story, including how she became the first Korean athlete to earn an IFBB Pro Card, as well as her diet, training, and more.

Born in South Korea, Yeon-woo Jhi was a shy child growing up, admitting to have dealt with some serious social anxiety. She described herself as a frail and weak young girl, who severely lacked self-confidence.

At the age of 12, Jhi decided to start going to the gym, in order to increase her self-confidence and feel better about interacting with people. However, this quickly made her realize that she had a naturally aesthetic physique.

Yeon-woo not only started growing more confidence, but she started growing in size too. She was then challenged to enter a bodybuilding show at the age of 26, by friends who noted how impressive her physique had become.

The first time that Yeon-woo Jhi competed on the bodybuilding stage was at the 2010 Korea YMCA, in the 52kg division. After winning this show, she discovered how much she enjoyed the competition and the fruits of her labor in the gym.

The following year she would begin working with coaching legend Chris Cormier, and he helped to propel her physique to the next level. 2011 would see her win the Muscle Beach International, and come in second at the NPC Excalibur, narrowly missing out on her Pro Card.

However, Yeon-woo would not be dissuaded and bounced back in 2012 with a third-place score at the Miss Korea. The work that she was dong was paying off though, and that became evident in 2013.

Competing at the Arnold Classic Europe, in the Women’s Physique division, Jhi was able to win the event, earning her IFBB Pro Card. She made history with this too, by becoming the first Korean athlete to do so.

Yeon-woo Jhi made her IFBB Pro debut at the 2015 IFBB Vancouver Pro, where she made a solid impact by coming in fourth place. This was followed up by a big 2016, where she competed at the Women’s Physique International, and even scored third at the New York Pro.

The following year, she would come back to the New York Pro, coming in fifth place. At the time of writing, this was the final time she stepped on stage as a bodybuilder.

Related: Korean IFBB Pro Bodybuilder Yeon Woo Jhi Has Bigger Muscles Than Most Of Us

When it comes to her approach to training, Yeon-woo Jhi likes to put a ton of focus on proper form and technique. She is sure to train 4 times a week, lifting heavy weights after warming up every time.

Below is her training split:

Day Five: Back and Biceps

As far as her favorite exercises go, Jhi loves to do standing cable pullovers, with her favorite body part to work being the back. She says that she is sure to add that to the end of every back workout.

When it comes to her diet, Yeon-woo Jhi consumes a lot of calories on a daily basis, upwards of 2800. This all comes from clean food, as she prides herself on her ability to make diet food taste good, saying that she has been able to fool people with her solid skills in the kitchen.

Some of her favorite foods include:

Yeon-woo says that she never eats the same food twice in a row, which helps her stick to a strict and healthy diet. She feels like eating clean and doing so consistently leads to a happier and healthier lifestyle.

When it comes to supplements, Jhi uses a decent size stack on a daily basis, to help with a variety of her needs. Primarily she follows a regimen of preworkout supplements before workouts, amino acids while exercising, and a whey protein isolate shake right after she finishes her workouts.

When it comes down to it, Yeon-woo Jhi is a prime example that it is possible to have a great physique, without fear of sacrificing a feminine appearance. In fact, her fair features have led to her making an appearance on television, appearing on the small screen in 2012.

Other ventures in her life include personal training, where she has found a love in helping others achieve similar success to hers. She loves to be an inspiration to those around her, and be a living example of what hard work and a little bit of self-care will do for you.

Hunter Labrada is an IFBB Professional bodybuilder and businessman from the United States. His father is bodybuilding legend Lee Labrada....