Shaun Clarida Teases Samson Dauda Showdown At 2023 Arnold Classic: I’m Going To Have To Out-Pose Him’

'The Giant Killer' Shaun Clarida will put his nickname to the test against Dauda at the upcoming 2023 Arnold Classic. 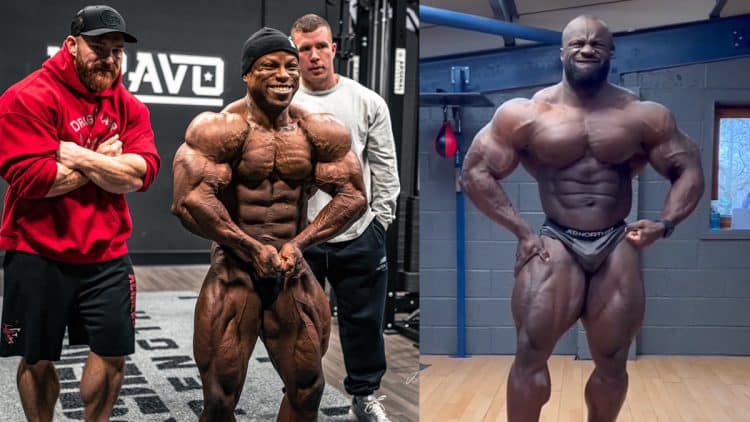 Reigning 212 Olympia champion Shaun Clarida is already locked into preparations for his next bodybuilding contest. In a Muscular Development interview, Clarida discussed his strategy for the 2023 Arnold Classic and teased a battle with mass monster Samson Dauda.

In 2020, Shaun Clarida reached the height of his career after securing his first 212 Olympia title. At the contest, he prevented the defending champion Kamal Elgargni from winning and also defeated the late George Peterson and Derek Lunsford.

Lunsford got his revenge against Clarida at 2021 Olympia in the 212 category. Despite losing his status as champion, Clarida returned at the Legion Sports Fest Pro as an Open class athlete. Clarida won and was nicknamed ‘The Giant Killer’ after defeating Regan Grimes and Sergio Oliva Jr. This victory earned Clarida a qualification to compete in the Open at 2022 Olympia.

While many fans expected Clarida and Lunsford to settle the score last year, the rematch never materialized. Instead, Lunsford accepted a special invitation to compete in the Men’s Open division at 2022 Olympia. He didn’t waste the opportunity and narrowly missed out on gold against Hadi Choopan. Clarida, on the other hand, opted to compete in 212 and won his second title dominantly.

With less than two months until the 2023 Arnold Classic, Clarida is back in prep, pushing the pace once again. He joined Giles Thomas to break down his strategy while teasing a battle with Samson Dauda, who is fresh off earning sixth place at Olympia a few weeks ago.

Shaun Clarida: People Doubted My Size Before I Was An Olympia Champion

“Yeah, well the one thing that really sticks out in my head was in 2012 when I won the nationals in the bantamweight class and I won my pro card — someone — and I won’t say names, came up to me and said, ‘congratulations, your career is over.’ I go, ‘what do you mean?’ They were like, ‘well there’s never been a bantamweight who has ever gone on to do anything in the IFBB,’ and I was like, ‘okay.’

Obviously, I could have easily said, ‘okay, he’s right,’ and quit. But I didn’t. Again, I knew what I was capable of, and I knew what the goal was. As far as being a Mr. Olympia, I don’t know if I said this to anybody, I started competing in 2005, I said in 2007 to my training partner back then, I said, ‘we’re never going to go to the Olympia, unless we’re on that stage.’ Even as a spectator, I said I’m never going to go to the Olympia until I earn my way on that stage,” Clarida explained.

Clarida In Better Mental Space Ahead of 2023 Arnold Classic, Thought About Pulling Out of 2022 Olympia

Considering he could have missed the birth of his first child, Shaun Clarida thought about pulling out of the 2022 Mr. Olympia. Fortunately, he didn’t let the stress affect his performance. He added that he’s in a better space mentally now that he and his wife had the baby.

“I’m mentally in a better space right now. For the Olympia, I was very stressed out. My girlfriend was home and set to be due any day. She could have easily gone into labor while I was at Mr. Olympia, and I could have missed the birth of my child.

So, that was really weighing on me weeks leading to Olympia. I never said anything about this either. But, there was a part of me that wanted to pull out of the Olympia this year because I didn’t want to miss that or have that in my mind. She [my wife] told me I couldn’t pull out. So, we continued on,” Clarida said.

After his wife gave birth to a baby girl, Shaun said his motivation has never been higher and he predicted he’ll be ‘as good or better’ at the upcoming Arnold.

“Now, entering into this prep [for the 2023 Arnold Classic], it’s smooth sailing. I have no stress whatsoever. I feel great. I’m very motivated right now. I’m back to training 100 percent. We’re ready. We’re going to be ready for this Arnold Classic. I absolutely think we’ll be just as good, if not better.”

Clarida Talks Showdown vs Samson Dauda: ‘I’m Excited For That Call-Out, I’m Going to Have to Out-Pose Him’

While he won’t be the biggest athlete on stage, Shaun is confident he can outshine Open class athletes with presentation, symmetry and conditioning.

“Listen, I know what my strengths are — and it’s conditioning. I push. I work my ass off to make sure I’m the most conditioned guy on that stage, whether it’s 212 or the Open. In this past year, we really stepped it up because we knew what the goal was. We knew that title was wide open. Obviously, still being in 212, I’m not going to be the biggest guy there.

But what can I beat these guys on… presentation, symmetry, and of course, my conditioning. Obviously I believe having a combination of that plus the fullness I bring to the stage is what carries me to that championship. I believe that’s what’s going to carry me to, God willing fingers crossed, an Arnold Classic champion this year,” Clarida said.

As of this writing, there are less than 10 Men’s Open competitors competing at the 2023 Arnold Classic. Since they competed in different divisions at 2022 Olympia, fans are excited to see a battle between Samson Dauda and Shaun Clarida.

“Yeah, I think [a call-out between me and Samson Dauda] would be fun. It’d be great. I think we have very similar physiques. Obviously, he’s a bigger version. But as far as round muscle bellies, things popping, I think it would be a great call-out. I’m excited for it. I’m going to have to out-pose him a little bit, so we’ll see,” Clarida said.

Veterans have taken to their podcasts to discuss the potential lineup. According to Dennis James, who helped train Mamdouh ‘Big Ramy’ Elssbiay for 2022 Olympia, Shaun Clarida is going to surprise a lot of Open class athletes at the Arnold. In fact, James said Shaun will ‘kill a few guys’ on stage because he’s able to out-condition most of his opponents.

The competitors list could change, but it’s safe to say Shaun Clarida and Samson Dauda are favorites heading into March. With his personal issues squared away, Clarida hopes to send shockwaves through the Men’s Open division once again at his first-ever Arnold Classic in seven weeks.