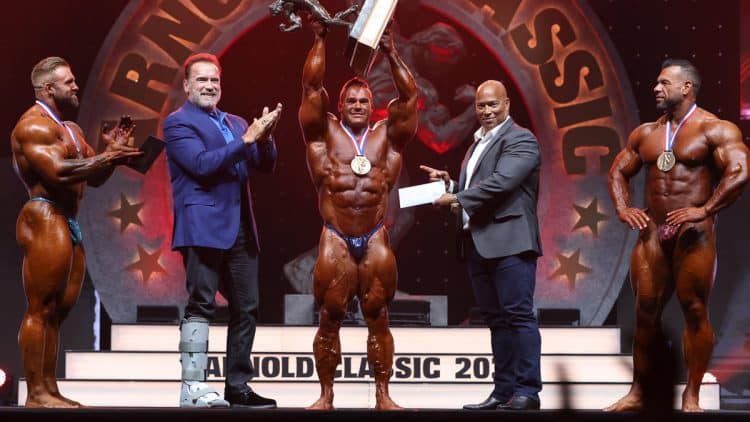 The 2023 Arnold Sports Festival is scheduled for March 2-5 in Columbus, Ohio. In a recent post on Instagram, the organizers announced the athletes participating in the competition.

In 1989, seven-time Mr. Olympia champion Arnold Schwarzenegger and Jim Lorimer founded the Arnold Sports Festival, which has experienced significant growth and expansion over the years. Now a multi-sport competition and expo, the ASF is a highly regarded event for bodybuilding and strongman enthusiasts. While its impact has been felt far beyond those specific sports, it is undeniable that it has played an immense role in revolutionizing the fitness industry as a whole. It has turned into the second most prestigious bodybuilding event of the year next to only Joe Weider’s Olympia Fitness and Performance Weekend.

Over the years, the Arnold Sports Festival has encountered its fair share of challenges, which have included logistical issues as well as political challenges. Even so, the fundamental purpose of the event has always been to increase awareness and enthusiasm for bodybuilding, and over time, the mission has expanded to encompass a variety of sports, such as strongman. Even in the face of obstacles, the ASF continues to attract attention to these previously niche sports and inspire a loyal audience.

It provides a platform for budding prospects to gain attention in the community and regularly produces future Olympia winners. Former Olympia champion Brandon Curry took home the top prize in the Open class at the last edition of the event whereas Classic Physique standout Terrence Ruffin defended the title successfully and added the second Arnold Classic win under his belt.

In a recent Instagram post, the Arnold Sports Festival announced the athletes from all seven divisions that will take to the stage at the Greater Columbus Convention Center, Ohio Expo Center, and other Central Ohio venues.

Reigning champion Brandon Curry will not return to defend the throne, leaving room for a new victor. Former two-time Arnold Classic champion William Bonac will look to improve his runner-up finish from the previous edition and create history by becoming only the fifth competitor to have at least three Arnold trophies under his belt.

Two-time reigning 212 Olympia winner Shaun Clarida and former 212 Olympia champion Kamal Elgargni are set to make their splash in the Open division of the Arnold Classic. Samson Dauda will also be in the lineup next as well as up-and-coming sensations including Blessing Awodibu and Charles Griffin.

Two-time reigning Arnold Classic Physique champion Terrence Ruffin will not be in attendance to defend his throne at the 2023 Arnold Classic. His decision to withdraw from the show came in the wake of his lackluster showing at the 2022 Mr. Olympia, where he dropped out of the top five and placed sixth.

Ruffin’s withdrawal leaves the door open for a new champion to emerge. Olympia runner-up Ramon Rocha Quieroz will be on the hunt for his first trophy, much like German sensation Urs Kalecinski. Former Arnold Classic champion Alex Cambronero is also in the lineup.

2022 Arnold Classic Men’s Physique champion Erin Banks will target a successful title defense for this edition against a slew of talent. He’s coming off a historic performance at the 2022 Olympia, where he managed to edge out three-time Olympia Men’s Physique winner Brandon Hendrickson for first place.

Fellow standouts Emanuel Hunter, and Diogo Montenegro will also be in the mix of title contention next to a total of ten contenders.

2022 Arnold Classic Bikini winner Lauralie Chapados will be back to defend the throne in a division which is stacked to the brim. This year will mark the first edition where four former Arnold champions and three former Bikini Olympia queens will be in the lineup. 2022 Olympia Bikini winner Maureen Blanquisco will look to capitalize on the momentum and claim the Arnold trophy.

Iconic Bikini competitor Ashley Kaltwasser, a three-time Olympia champion, will also be on the stage next to another former Olympian, Jennifer Dorie.

The Wellness division debuted at the Arnold Classic last year. Isabelle Nunes created history by becoming the first-ever Wellness champion in the show’s history. She followed up with a stunning performance at the 2022 Olympia, where she placed runner-up behind defending Wellness Olympia queen Francielle Mattos.

Along with Nunes, the top five finishers of the previous edition (Angela Borges, Sunny Andrews, Julia Chitarra, and Yarishna Ayala) will return for another showdown.

Defending champion Ariel Khadr will look to extend her run at the top after becoming the winner of the 2022 Arnold Classic Fitness class. She put in an impressive performance at the 2022 Olympia and placed third behind runner-up Jaclyn Baker and champion Missy Truscott.

Khadr will face stiff competition from the likes of four-time Fitness Olympia winner Oksana Grishina and Baker, who finished third last year but defeated Khadr at the Olympia last month.

Reigning Men’s Wheelchair champion Gabriele Andruilli will look to become the second man in the division’s history to defend the title successfully. He turned heads at the 2022 Arnold Classic with an impressive performance that saw him dethrone the dominant five-time winner Harold Kelley.

Andriulli narrowly missed the top prize at the 2022 Olympia, falling short of the five-time Olympia winner Kelley. Another clash between the two is set for this year while surging prospects like Bradley Betts aim to leave their mark.

You can get your tickets for the 2023 Arnold Classic online here. For those who won’t be live at the event, Fanmio provides a pay-per-view offering to watch the show from the comfort of your home.

In 2022, the Arnold Sports Festival again welcomed live crowds, demonstrating its importance on the fitness calendar. The expo featured almost 1,000 booths and featured more than 20,000 athletes from around the world. It is likely that the Arnold Sports Festival will remain one of the most prominent events on the fitness calendar for many years to come.

As has been proven time and time again, there will be many rising stars at the show who have the potential to become Olympia winners in the future. We wish each contestant all the best in their preparations and look forward to watching another memorable competition.