Bodybuilder Blessing Awodibu: ‘It’s Going To Be Crazy In The Olympia Lineup’ With Andrew Jacked

"The Boogeyman" backed Jacked's potential to be 'limitless' as he shared his take on this year's Olympia lineup. 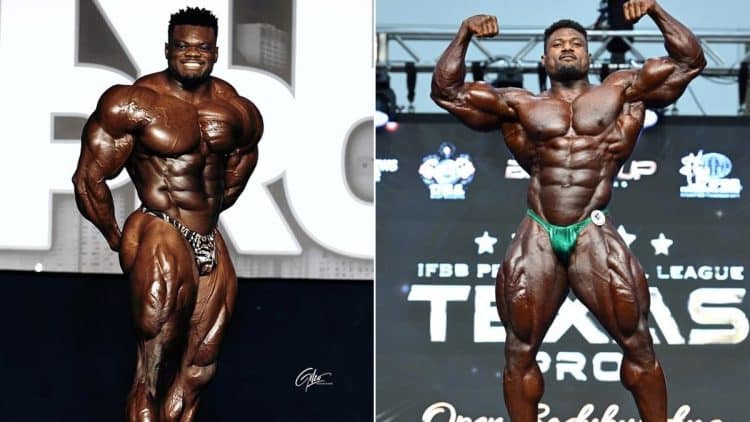 After Andrew Jacked (real name Chinedu Andrew Obiekea) took home the prize at the 2022 Texas Pro earlier this month, he earned praise from fellow athletes and former champions who took notice of his potential. In a recent video uploaded to Muscular Development Magazine’s YouTube channel, Blessing Awodibu stated that Andrew’s potential is limitless.

The bodybuilding Open class is renowned for having mass monsters on stage. Blessing on the other hand stands out in the division due to his sharp conditioning and thin waistline. The Nigerian-born Irish athlete made his pro debut with a third-place finish at the 2021 Indy Pro. He also gained notoriety after sharing a heated rivalry with Nick Walker in the build-up to the 2021 New York Pro, where Walker won the show and Awodibu placed sixth.

Following the result, Blessing chose to step away from the competition to work on his physique. His hard work was evident as “The Boogieman” brought an improved package to the stage, winning back-to-back titles at the 2022 Indy Pro and the New York Pro.

Awodibu’s victories earned him an invitation to the 2022 Olympia, set for Dec. 15-18 in Las Vegas, Nevada. As the countdown to the show began, Awodibu took shots at fellow bodybuilder Iain Valliere when discussing the classic size vs. aesthetics debate. Valliere believed that size would beat aesthetic most times whereas “The Boogeyman” argued that comparing mass monsters of the early days to the mass monsters of today would not be fair

In a recent video uploaded to muscular Development Magazine’s YouTube channel, Blessing Awodibu shared his thoughts on the rise of Andrew Jacked.

“I don’t know who linked him with George but I’m so happy that he did. Andrew’s potential is limitless.”

At this year’s Olympia, there will be three Nigerian-origin athletes competing including Awodibu, Andrew, and Samson Dauda. Blessing talked about how they all look aesthetic yet are unique while giving his take on the lineup.

With just under four months left, Blessing Awodibu is leaving no stone unturned in his prep for the Olympia. He recently shared a grueling leg workout with warm-up exercises to reduce stress on the knees and hip joints. Considering how determined Awodibu is to bring an amazing physique at his Olympia debut, many believe it wouldn’t be surprising if he emerged as a real threat to Mamdouh “Big Ramy” Elssbiay‘s throne..