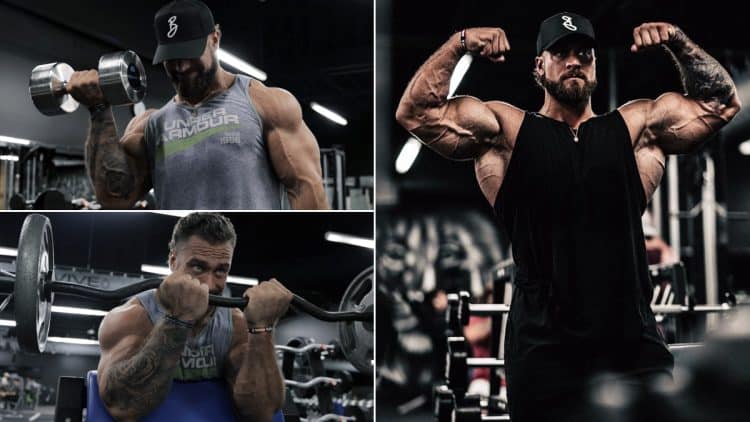 The 27-year-old phenom is the reigning Classic Physique Olympia champion and is considered among the greatest bodybuilders of the current era. After scoring runner-up finishes at the 2017 and 2018 Olympia, Chris Bumstead conquered the Classic Physique throne in 2019 and successfully defended it in 2020 and 2021. He will attempt to secure his fourth consecutive win when Olympia returns to its home in Las Vegas after three years. The event will take place from Dec. 15 to 18.

After significantly improving his physique during the off-season, Bumstead has finally started his 2022 Olympia prep. He recently went through a high-volume arm workout in prep for the showdown later this year. The video of this session was uploaded on Bumstead’s YouTube channel.

Bumstead started with this exercise to pre-exhaust his arms before getting to the heavier sets. Rope push-down is an effective way to warm up the elbow joints in addition to the arms. Since the elbows are used in almost all arm exercises, warming them up can help avoid injuries and soreness.

“I’m gonna do a bunch of these till my arms are sore. Then we’re gonna move to heavier movements. Trying to pre-exhaust, protect my shoulders, protect my elbows and not die!” Bumstead stated.

CBum performed several sets of this exercise before moving on to the main arm workout. He maintained a 10 to 12 rep range for each one of the sets.

Bumstead next jumped onto the dumbbell overhead extension to work his triceps. It is an isolation movement that helps strengthen the triceps, builds muscle mass, and improves shoulder stability and mobility. The Canadian native did this exercise in a slow and controlled motion.

After working the triceps, the 27-year-old took to the close-grip incline bench press. Although he used a barbell for this exercise, Bumstead stated that he has significantly reduced the use of free weights since injuring his shoulder a while back.

The three-time Classic Phyqiue Olympia champ started the first set with two plates on each side. He took a quarter plate jump in the second set and wrapped up the exercise after a few sets.

Bumstead performed the exercise with an underhand grip. This variation activates the entire triceps but primarily focuses on the medial head. Additionally, reverse-grip triceps push-down engages the glutes, back, and core to stabilize the body.

Setting free weights and machines aside, the Canadian performed parallel bar dips to work his triceps and shoulders. It is a composite movement that improves upper body strength. In addition to working the triceps, dips train anterior deltoids, pectoralis, and rhomboids.

After completing his triceps routine, Bumstead shifted his focus to the biceps and started with one of the most common biceps exercises, the dumbbell biceps curl. The reigning Classic Physique Olympia champ performed a couple of variations of this exercise:

“If you don’t get a pump from doing these four sets here alone, you’re doing something wrong. So give it a shot kids. The biggest arms pump you’ll ever have in your entire life,” Bumstead stated.

“A beautiful pair to the preacher curl is the spider curl for obvious reasons. You’re hitting it on the opposite ends of the spectrum. One of them has weights pulling down and the other one, you’re forward – elbows are locked a lot more forward. You’re pulling higher with your elbow rather than stuck in place. It really hits your biceps in beautiful different ways,” Bumstead said.

CBum performed multiple sets of both exercises with short rest periods between sets.

Bumstead next worked his biceps with the standing cable curl. He performed a few sets of this movement in the 10 to 12 reps range with minimal rest.

Reversing the grip on the EZ bar curl works the brachioradialis—the muscles in the anterior part of the forearm, just below the elbows. Since this exercise also targets the brachialis and brachii as synergists, it is best performed at the beginning or the end of an arm workout. Bumstead performed a few sets of this exercise to wrap up his arms workout.

Bumstead has had a bad shoulder for a long time now. Just before the start of his 2022 Olympia prep, the reigning Classic Physique champ strained his knees while playing basketball. While Bumstead would have preferred to start the Olympia prep without nagging injuries, he acknowledges that it is the time of the year when you cannot make excuses. Looking at his mindset and the work he is putting in, the fourth consecutive Olympia win looks in reach for CBum.