"The Mutant" is pushing the limits of his strength nine weeks away from his second Mr. Olympia appearance. 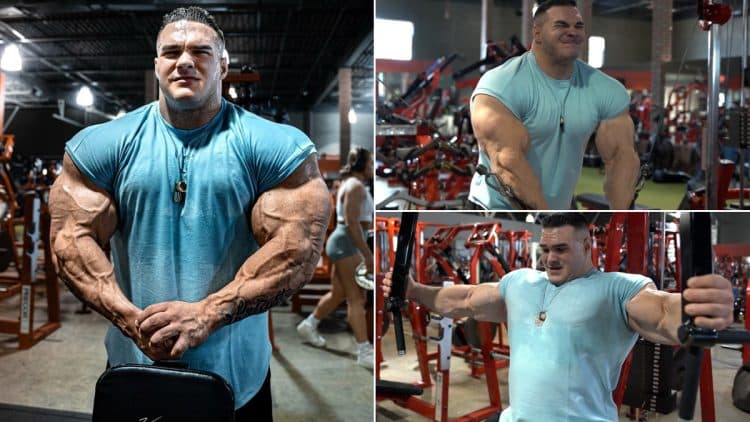 Bodybuilder Nick Walker‘s training sessions are getting more intense by the day. In a recent YouTube video, Walker attacked a demanding chest and arms workout nine weeks from 2022 Mr. Olympia.

“I don’t like to have a set game plan. I feel like that’s easier to be locked into something. I’m always locked in, but also if I don’t feel something, I’m not going to do it; I’ll do something else,” says Nick Walker.

He hasn’t competed at a show in 2022, but that’s all about to change for Walker, who is planning to bring his best look possible to the Olympia stage later this year. He’s one of the hottest stars in the sport, which he accomplished following a very successful 2021 season.

Walker won his first IFBB event at the 2021 New York Pro last year. He predicted he would win Ohio’s Arnold Classic on his very first attempt, a feat he accomplished handily when he defeated runner-up Iain Valliere and Steve Kuclo. He brought that momentum with him to Sin City months later and secured a fifth-place finish in his debut at 2021 Mr. Olympia.

In February, Walker and Matt Jansen, the coach who guided him to success last year, split up. Some have said supplement sponsorships are the reason for their separation. However, others have speculated that it stemmed from Walker wanting to compete at more Pro shows like the 2022 Arnold Classic, which he ultimately bowed out of to continue his pursuit for a Sandow trophy.

Last week, Walker and Jansen reunited. The last time we saw Walker annihilating a training session, he was smoking a massive deadlift for reps. In his latest workout endeavor, “The Mutant” tested his strength with a grueling nine-exercise training program, surely devised by his coach Jansen.

Find a comprehensive breakdown of his workout below:

According to Walker, his strength is where it needs to be at this stage in prep. In the coming days, Jansen plans to have Nick cut down on carbohydrates and fats. Walker believes these measures will help him achieve a leaner physique before things ramp up further.

“Like I said, strength is still need where it needs to be. I sent Matt [Jansen] updates this morning. We did cut food down a little bit. Cardio is still the same, but we cut some carbs out, a little bit of fats out, so we’ll see how the body responds.

Weight is the same but we’re getting harder, getting leaner. Objectively, I think that’s somewhat of the goal. Just maintain and get better at it,” Walker shared.

Walker says his weight will have to start coming down soon. He anticipates a drop in weight by next week.

“At some point, the weight does have to come down to some degree. Hopefully now, we’ll start to get the body moving and grooving in that direction.

I don’t think the body is stalled or anything, but I always go through this during prep where the weight doesn’t really drastically move. I’m pretty sure within the next week, maybe sooner, my weight will start to drop,” says Walker.

In preparation for his second Olympia appearance, Walker has trained relentlessly during the off-season. He’s worked out with a number of high-ranking bodybuilders, some of which include, Kamal Elgargni, Samson Dauda, Brandon Curry, and reigning 212 Olympia Derek Lunsford. Before all is said and done, Walker hopes to win ‘as many Arnolds and Olympia as possible.’

Already, coaches and fellow bodybuilders are predicting Mamdouh ‘Big Ramy’ Elssbiay to do some damage at 2022 Olympia. The champion’s coach, Dennis James is confident Ramy will be at his ‘best ever’ this winter. Before ending his off-season, Ramy was tipping the scales at a colossal 337 pounds. The two-time Mr. Olympia continues to send warning shot after warning shot to his competition.

Time is running out, and Nick Walker’s latest training session would suggest he’s starting to push the limits of his body. With less than 9 weeks until 2022 Olympia, Walker is planning to bring one of the best packages of his career.