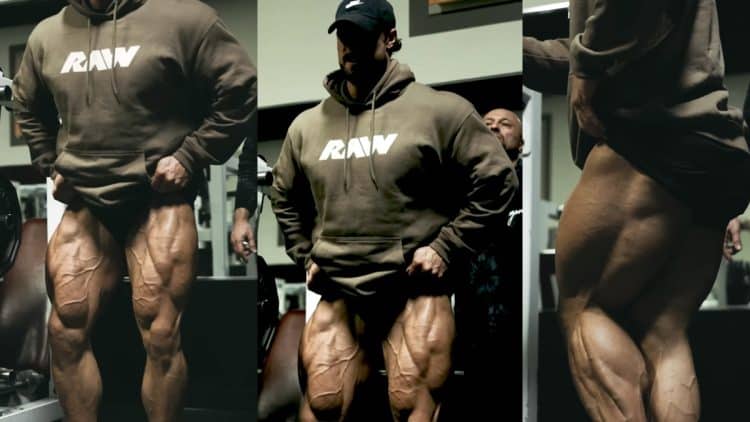 Chris Bumstead recently gave a sneak peek into his peak week and shared the final leg day workout of his 2022 Olympia prep. The 27-year-old Canadian bodybuilder is arguably the most successful competitor in the history of IFBB Pro League’s Classic Physique division. CBum became the Classic Physique Olympia champion by defeating former kingpin Breon Ansley at the 2019 Olympia. He defended his Olympia throne in 2020 and 2021. CBum will attempt to extend the legacy further and score his fourth consecutive win at the 2022 Olympia.

Bumstead’s quest to remain at the top of the division has not been without a fair share of adversities. After battling a severe covid-19 infection in December of last year, CBum has suffered many injuries leading up to this point in his competition prep but has prevailed over the hardships nonetheless. After ending his long coach-client relationship with Iain Valliere, CBum is now training under Hany Rambod for the 2022 Olympia. The most recent physique updates show that Bumstead is peeled and ready to take on the division again. The Classic Physique Olympia champion can also attribute the progress to his supplement stack and 2,100-calorie shredding diet.

Recently, CBum shared his final leg day workout before the 2022 Olympia on his YouTube channel. So without further delay, let’s take a closer look at the detailed account of this session.

At the beginning of the workout, Bumstead asked Rambod what he expected to get out of this workout.

“Okay, so what we’re going to do is we’re gonna get blood in his quads, hamstrings, and calves. We don’t want to sit there and annihilate his body, but we want to be able to continue to keep that fullness in his legs as much as possible.”

“But the reason why you don’t go a hundred percent and just destroy them is because you’ve got to make sure they’re nice and dry by the end of the week. So it’s just about 80 to 90 percent, and it’s just a matter of keeping that volumization and all the muscles in the body,” Rambod stated.

CBum worked the adductor muscles at the beginning of the workout to get a good warm-up. The adductor muscles of the hip are a group of muscles mostly used for bringing the thighs together. After warming up with a few sets on the hip adduction machine, CBum took to the next exercise.

This quad isolation movement was the next in Bumstead’s training session. He performed the exercise unilaterally to focus more on the movement and cranked out a few good sets.

Bumstead worked the hamstrings, also known as the biceps of the legs, with lying leg curls. Besides stimulating the hams, leg curls are an excellent way to warm up the knee joint, which is crucial for performing most lower body movements. Additionally, they do not put a lot of stress on the knees like other isolation exercises and hence make for an excellent first hamstring exercise in the training routine.

CBum pushed through a few sets of leg curls under Rambod’s guidance. The famed coach then instructed his client to add a few more reps and explained:

“Alright, what we’re going to do is we’re going to focus on being able to just get some quality reps in… We’re gonna keep his feet a little closer, change the angle a little bit and finish up with those hamstrings, get that really good contraction.”

After doing those extra reps, the reigning Classic Physique Olympia champion took to the first compound movement of the day.

The 27-year-old did some sets of good ol’ leg presses next for more leg muscle stimulus.

The Bulgarian split squat works most lower body muscles like the quadriceps, hamstrings, glutes, and calves. Additionally, the core muscles work to maintain balance. CBum performed a few sets of this exercise before returning to an isolation movement.

CBum worked the hamstrings further with this variation of leg curls. The seated leg curls enable a greater range of motion and hence help bring about hypertrophy more effectively.

Bumstead next worked the abductor group of muscles that are responsible for moving the legs away from each other. After doing some high-intensity sets of this exercise, he exchanged pleasantries with fellow competitor Urs Kalecinski, who arrived at the gym for a workout.

The kneeling leg curl is best described as the preacher curl for the hamstrings. Since the quads are pressed against the pad during this exercise, the hamstrings get isolated to a far greater extent. The Canadian bodybuilder cranked out some solid sets of this exercise and wrapped up the training session.

Bumstead has maintained a lead over the rest of the Classic Physique competitors for a fairly long period. However, the division is slowly but surely catching up with its dominant champion, and the emergence of elite young talent like Kalecinski and Ramon Rocha Querioz is a testimony to that. The seven-time Mr. Olympia champ Phil Heath recently shared tips for beating Bumstead and veteran bodybuilder Samir Bannout believes that Ramon Dino will be the biggest threat to CBum at the 2022 Olympia. However, CBum has momentum on his side, and it seems he can definitely secure his fourth consecutive win to further his legacy.

You can watch the full workout video below, courtesy of Chris Bumstead’s YouTube channel: