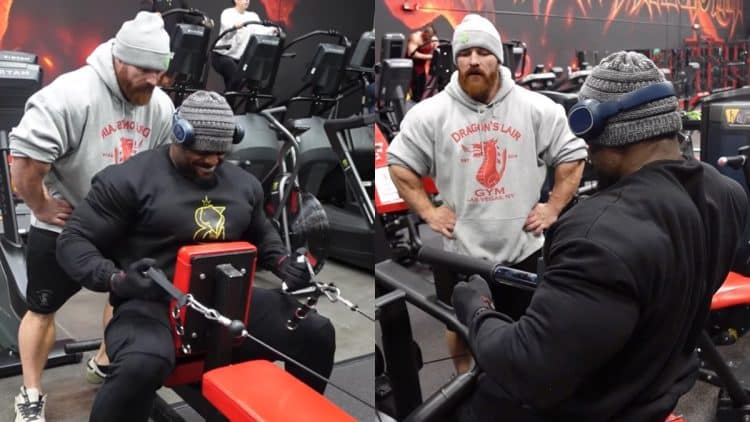 Andrew has garnered a lot of attention in the bodybuilding community since turning Pro. While many experts have predicted a different outcome at the 2022 Olympia, most of them agree that Andrew will be a relevant figure in the Men’s Open division. 4-time Mr. Olympia winner Jay Cutler believes that Andrew Jacked will probably beat everyone at the show except the reigning champion Mamdouh ‘Big Ramy’ Elssbiay. Veteran bodybuilder Chris Cormier has a measured expectation and sees the Nigerian realistically finishing in the top ten. Under the guidance of Flex Lewis, Andrew Jacked is working hard to push his limits and bring a complete package to the stage at the 2022 Olympia.

The 212 division was dominated by Lewis for over half a decade, reigning supreme with no letup or weakening. The sheer domination gave rise to speculations about his future in the Open division. However, he laid all the speculations to rest by issuing a retirement statement earlier this year. At this stage, Lewis has significantly downsized and he is keeping himself busy with other endeavors.

Andrew Jacked and Flex Lewis crush a massive back workout

Andrew Jacked and Flex Lewis recently went through a killer back workout in the Dragon’s Lair gym in Las Vegas, Nevada. It is one of the most popular bodybuilding gyms in the USA and belongs to Flex Lewis. The video of this session was posted on Andrew Jacked’s personal YouTube channel. So without further delay, let’s see how Flex Lewis helped Andrew Jacked add more detail to his Physique.

Being the more experienced of the two and obviously more familiar with the gym, Flex Lewis led the workout while Andrew Jacked followed the suite throughout the training session.

Flex Lewis instructed Andrew Jacked to do the regular bodyweight pull-ups to warm up the body before jumping into the heavier compound movements. He suggested Andrew to use a suicide grip during this exercise to eliminate forearm and grip strength from the picture.

Flex Lewis held the position after the set and twisted his body on both sides to get an extra stretch in the traps.

“I pulled my trap three weeks ago doing pull-ups and I was out. This is the first time I’ve done pull-ups in three weeks,” Lewis added.

The duo performed a few sets of pull-ups and prepared their bodies to jump into the main workout.

Muscle isolation plus heavy loads equals muscle and strength gain. Low Rows are one of the most effective ways to build thickness in the back with these two factors. The padding in the chest supported Rows stops the person from using momentum to move the weights and helps isolate the back muscles to a greater extent.

Flex Lewis guided Andrew Jackd to do high-volume sets of this exercise. In each set, Andrew did full reps with slow negative phase and then followed them up with five partial reps to keep the muscles under tension for a longer time.

While explaining the ways to add detail to the physique at this stage of Andrew’s competition prep, Lewis said:

“To me, right now it’s all about trying to get these little details out. ‘Coz we all know you can train and put f***ing six plates on the machine but to get a good detail out, that’s why you pose, pose and pose. There’s no weight involved in posing, right? You’re just holding the pose and when you’ve done that over weeks, you see all those (details)… “

After performing a few sets of this chest-supported rows using this technique, the duo moved on to do the next exercise.

Lewis guided Andrew to do this superset next for targeting multiple muscles within a short period of time. The incline rows work the latissimus dorsi and the biceps muscles. Doing this exercise on an incline surface helps emphasize the lower lats in particular. One the other hand, the straight arm pulldowns also target the latissimus dorsi muscles. However, they also activate the rhomboid, teres major, triceps and posterior delts.

Andrew Jacked and Flex Lewis performed all the sets within this superset with slow and controlled motion with minimal rest periods and took to the next exercise of the day.

Flex Lewis and Andrew Jacked wrapped up the training session with this movement. The seated rows also train the latissimus dorsi and the upper back muscles. In addition to improving back strength and thickness, they are an excellent way to improve posture.

Andrew and Lewis did a few sets of this exercise and wrapped up the training session.

Andrew Jacked already possesses an impeccable physique. However, he wants to train with someone that can push his limits further at this stage of this competition prep and that’s where Flex Lewis is helping him tremendously.

“The push (Flex Lewis gave me in this workout) was crazy. That’s why I need someone that can take over. I just work based on my preference and that’s why I am still in a maintenance phase. I need someone that can get me past my limits which is what I will definitely work on in my off-season after the 2022 Olympia definitely. Because to be the best, I have to work with the best,” Andrew Jacked said after the workout.

Andrew Jacked has also trained with the likes of veteran bodybuilder Roelly Winklaar in recent weeks to push his limits and the results are visible in his appearance. While he is carrying the pressure of expectations on his shoulders quite well, it will be interesting to see how he performs on the Olympia stage. The event will take place from Dec. 15 to 18 in Las Vegas, Nevada. Stay tuned with Fitness Volt for all the updates until then.