"The Shadow" opened up about his first bodybuilding cycle: 'I put on a about 20 pounds in six weeks.' 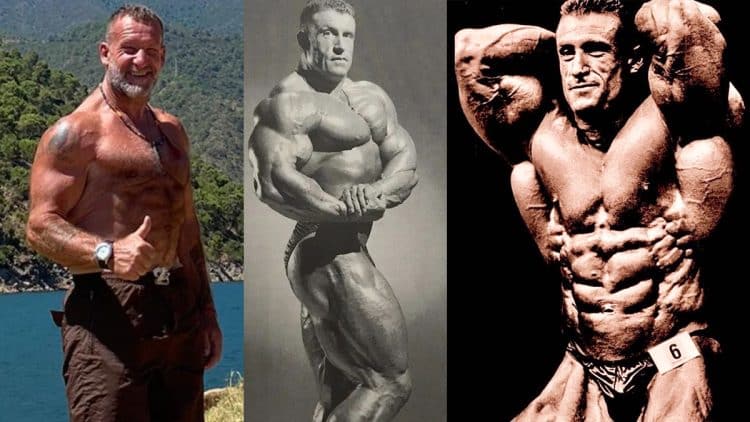 Bodybuilding legend Dorian Yates hung up his posing trunks but his love and passion for the sport haven’t gone anywhere. In a recent YouTube video, Yates discussed his past/current bodybuilding cycles and named Dianabol as his all-time favorite steroid.

“During the off-season, it was my favorite. If I had to choose a single fuc**ng thing, that would be it. It’s funny — I heard Arnold [Schwarzenegger] said exactly the same thing,” Dorian Yates shared.

Dorian Yates, a mass monster who made a name for himself in the 1990s, has long retired but his decorated résumé has stood the test of time. During his tenure, Yates won the Mr. Olympia title on six consecutive occasions (1992-1997). He’s competed against legends of the sport, including eight-time Mr. Olympia Lee Haney, Chris Cormier, Flex Wheeler, and Shawn Ray.

During his career, Yates’ quiet and reserved nature earned him the nickname “The Shadow.” He let his physique do the talking and what he brought to the Olympia stage was nothing short of extraordinary. He boasted one of the best backs in the history of the sport, which he accomplished with unrelenting and intense training, where he often went to ‘near failure.’

Yates remains a figurehead in the sport given his contributions. In one of his latest admissions, the six-time Olympia winner looked back on his first bodybuilding cycle before naming his all-time favorite steroid.

Dorian Yates Shares ‘Emotional Contact’ With Dianabol: ‘That Was The Best Steroid I Ever Took’

During the latest podcast with Dennis James, Dorian Yates opened up about his first cycle, which he says started with Methandriol.

“My first cycle — 15 milligrams a day of Tunaject, which was a Methandriol stand alone from India with some B vitamins in there. I put on a about 20 pounds in six weeks. I was at the gym, yeah. So at the gym, there’s guys there, powerlifters, bodybuilders that compete on a national level and stuff right,” Dorian Yates shared.

According to Yates, he and Arnold Schwarzenegger both favored using Dianabol. He credited the drug as the best steroid someone can take.

“I had emotional contact with that — Dianabol [Metandienone]. For me, that was the best steroid I ever took. During the off-season, it was my favorite. If I had to choose a single fuc**ng thing, that would be it. It’s funny — I heard Arnold [Schwarzenegger] said exactly the same thing — because Tom Platz was saying, ‘I don’t know why Arnold loves Dianabol so much.’ I’m like, it’s the best single steroid you can take.”

While Yates tried to micro-dose HCG, he said it made him not feel good.

“I used to do it in the off-season eight weeks cycle. I would do five weeks on the highest dose and then three weeks decreasing down. Then I would take three weeks off. I tried HCG and I just never felt good on it. I couldn’t really put my finger on it but I didn’t feel good on it.”

Yates on Micro-Dosing Testosterone: “I Do 200 Milligrams Over 10 Days”

After speaking with specialists, Yates revealed that he’s been micro-dosing testosterone. He never comes off testosterone in retirement and says he’s taking 20 milligrams daily.

“Then, recently, because I’m on TRT. The doctor I’m working with said, ‘how bout we try this. We reduce your TRT, and we put little micro-doses of HCG to bring the natural — and we have a bit of both. It sounds great in theory but I did it for two weeks and I felt like shit,” says Yates.

Back when he competed, Yates said if he was “in between cycles,” he wouldn’t use any steroids.

“Between cycles I would just do nothing. I would train a little lighter and then just do nothing. I do micro-dose testosterone. So, I do 200 milligrams over 10 days but I do 20 milligrams a day subcutaneous. Talking with a few specialists and experimenting with myself, that this causes less disruption as it’s like a daily little pulse,” Dorian explained.

The six-time Mr. Olympia said he’s not trying to build muscle and he only takes testosterone to benefit his health.

“Yeah. Everyday. That’s like 600 milligrams a month,” says Yates. “It’s just about being healthy at this point. I’m not trying to have a high level of testosterone because I want to build muscle. I simply want to maintain and maintain my health.

Yates uses recreational drugs in retirement, like DMT. This isn’t his first instance discussing his time on the psychedelic substance. He has credited them in the past as powerful life-changing medicines.

“Dimethyltryptamine [DMT] is released from the pineal gland at night — actually when you go to sleep, that’s what helps you have dreams. Their theory is studying people that have near-death experiences. In other words, their hearts stop for some period in the hospital, and they ask them afterwards, what their experiences were if they came back after 10 minutes or 20 minutes — whatever.”

Yates says DMT alters one’s perception of the world around them, like most hallucinogenic compounds.

Milos Sarcev also tried using DMT. He was intrigued by the drug after seeing popular podcast host Joe Rogan and Yates using it.

“Yeah I did it because I was intrigued. I listened to Joe Rogan and Dorian was there and a bunch of other people. I said, ‘okay, what can possibly…’ Within three hits, that’s how I was instructed, you inhale three times — and you went to a goddamn trip to a different universe.”

Sarcev shared that he began to see “geometric shapes” during his psychedelic trip.

“From what I’ve seen every time that I did it, three times or four — I don’t even know. It’s geometric shapes, like Dorian said. I’ve never seen anything like it. Like a Swiss clock, you know… modern technology. And colors… red is not your usual red,” says Milos Sarcev.

Despite stepping away from the sport, Yates has gone to considerable lengths to preserve his health. He recently showed off his jacked physique at 60 years old and doesn’t appear to be slowing down.

This wasn’t the first time Yates spoke about steroids. Though, the last time we heard from the legend, he was warning others in the sport about their potential dangers. Earlier this year, the six-time Olympia winner made headlines for suggesting that bodybuilders have become ‘ticking time bombs.’ Moreover, he advised against using such compounds unless someone is competing and/or over the age of 40.

Yates understands the effectiveness steroids can have for bodybuilding competitors but believes these compounds should be used with caution. Following one of the most successful careers in the league, Yates micro-doses testosterone in retirement to maintain his health instead of using it to build muscle.