Hafthor Björnsson seems disgusted with the situation and accuses Hall of severely injuring someone. 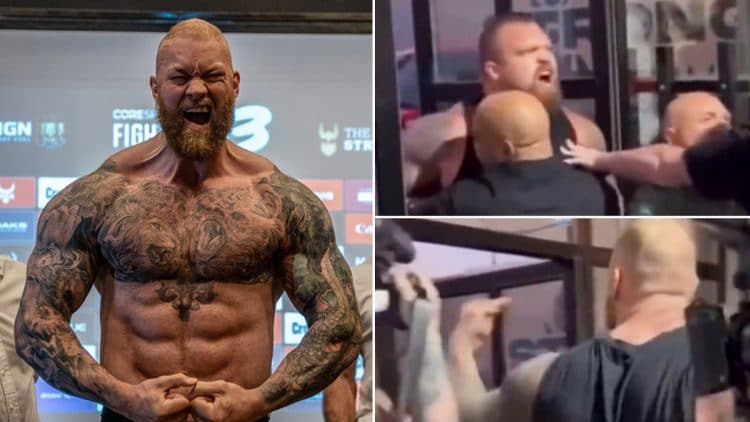 Just 4 days are left until we get to see the highly anticipated boxing match between Hafthor Björnsson and Eddie Hall. The fight will take place on March 19th, 2022, inside the Dubai Duty-Free Tennis stadium in the United Arab Emirates. Björnsson and Hall recently had a pre-fight face-off, which was not planned according to Hafthor. In addition, at one point Björnsson and Hall had to be separated, and started spitting on each other.

The video footage of their encounter was shortly available to the public, but it is being taken down currently due to the setup not being discussed with the property owner. However, Hafthor Björnsson wanted to address the situation and let the fans know what had happened. His explanation was placed at the end of his most recent YouTube video.

“I am getting a lot of questions regarding an incident that occurred between Eddie and I yesterday. As I was getting ready to train when I received a message letting me know that Eddie was five minutes away.

I had no idea that this was happening. It was an obvious setup that Eddie was in on.

Things got pretty heated, insults were thrown and it ended with Eddie being dragged out of the building, severely injuring someone involved, whilst trying to spit on me. (I did spit back, not my finest moment but the adrenaline was cranked and I was shocked that he would do something so disgusting.)

Regardless I managed to keep quite calm, all things considered, as I didn’t want to throw two years of hard work out the window.”

At one point in the video, Hafthor Björnsson explains that he doesn’t trust Eddie Hall at all. In addition, he believes that Hall is capable of sabotaging his camp. Because of that, Björnsson doesn’t want anyone except the members of his own team to be present in his tent and within the reach of his food.

The feud between Björnsson and Hall began after a disagreement in the 2017 WSM Finals. Due to double-dipping, one of Björnsson’s reps was dismissed from event 3, the Viking press. Hall won the race and earned one point more than Björnsson, which was essential in the title race. Since then, the two men have had a slight resentment towards each other.

Bjornsson wanted to take revenge, and the best way to do it was to outperform one of Hall’s lifetime achievements. Apart from winning the 2017 WSM, Hall was most proud of his 500 kg Deadlift World Record. In 2020, Hafthor Björnsson felt capable of breaking the record, but couldn’t get to a sanctioned competition due to Covid-19. However, he hosted an event at his own gym in Reykjavik, Iceland, and broke the record. Despite WUS sanctioning it and Magnús Ver Magnusson being the head judge, Hall doesn’t recognize it as an actual record.

Björnsson and Hall decided that the only way to squash the beef was to organize a boxing match. They set up everything, and the fight was supposed to take place last year. However, Hall injured his bicep while sparring, and the fight had to be rescheduled. While he was recovering, Björnsson fought against an arm-wrestling icon, Devon Larratt, and won via technical knockout in the first round.

While trying to find an agreement, Hall issued a challenge to Hafthor, stating that the loser would be required to donate $100,000 to charity. Hall then further increased the stakes by stating that regardless of the outcome, both men should donate $200,000 to charity. However, Hall still wanted to have something to fight for. According to him, both men should donate $200,000, but the loser should add a million. Björnsson denied the offer, and they agreed that the loser of this match will have to get a tattoo of the winner’s name on their body.

Hafthor Björnsson also had two exhibition boxing matches against Steven Ward and Simon Vallily, so there is no doubt that he is more experienced going into this fight. Both Björnsson and Hall are used to winning, and have been crowned the Strongest Man On Earth at one point. However, one man will have to lose this weekend.