Labrada feels he 'matches up well' against Mamdouh ‘Big Ramy’ Elssbiay: 'I'm going to the Olympia to win it.' 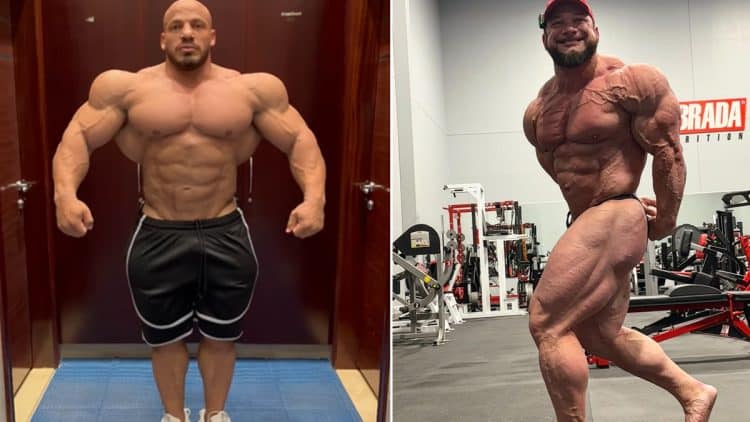 IFBB Men’s Open standout Hunter Labrada is finalizing the last stages of his preparations for the 2022 Mr. Olympia contest, which kicks off next Thursday (Dec. 15 to Dec. 18). Speaking with Rx Muscle’s Dave Palumbo, Labrada discussed his expectations for this year’s contest.

Over the past two years, Mamdouh ‘Big Ramy’ Elssbiay asserted himself as the number one Open bodybuilder in the world. His unparalleled size serves as one of his greatest weapons, and he’s used it effectively to defeat former Mr. Olympias like seven-time winner Phil Heath and Brandon Curry. However, one of the bodybuilders who hopes to disrupt his reign this year is Hunter Labrada.

“I was better than I was on stage at [last year’s] Olympia probably 10 days ago now. It’s going to be extremely different this year,” Hunter Labrada shared.

Last year, Labrada hopped on the sport’s radar after making short work of the 2021 Chicago Pro, where he took first place by defeating Brett Wilkin and Maxx Charles. Months later, Labrada entered his second ever Mr. Olympia contest and finished fourth. At the event last year, he managed to defeat rising star Nick ‘The Mutant’ Walker, and the two have been on a collision course ever since.

However, Labrada’s attention isn’t on Nick Walker, or even the top five — he’s solely focused on taking the title from Ramy and becoming the new champion. To accomplish that goal, Labrada has measured his progress with a number of training sessions and physique updates. And now a week before the event, Labrada is opening up about his expectations for his third Mr. Olympia competition.

According to Hunter, his physique doesn’t ‘translate’ well on social media, and added that people tend to call attention to his size and thin skin in person. Labrada defended his fourth-place showing at 2021 Olympia, despite many in the sport suggesting he was off and ‘watery.’

“Brass tacks of what it is — my look does not translate well in photos or videos like at all. That’s by myself or on stage. If I was looking at the Olympia from last year and I wasn’t there in person and I was just looking on a webcast, I would have been like, ‘what the fu** is he doing in fourth?’ Let’s just call it what it is.”

“That’s one thing for sure is I really don’t feel like my look translates and that works well for me because bodybuilding is judged in person. The comments that I get a lot from people are the texture of your skin and the level of your conditioning doesn’t really show through at all in pictures and then you can’t really get a feel for the size that I actually am looking at pictures.”

For this year’s Olympia, Labrada anticipates the contest being much different due to his level of conditioning.

“I feel like I’m a lot bigger in person and a lot better shape in person. Typically, in the past, and I’ll be honest about this year: this year is a whole different ball game in terms of conditioning,” says Labrada.

“Him being in Dallas, I would definitely call him [Branch Warren] a mentor at this point. He’s one of the very few people that I do let in from the outside. I do value his opinion very much,” said Labrada.

Labrada Talks 2022 Mr. Olympia Threats and Big Ramy Showdown: ‘His Weakness Is His Lower Back’

Ahead of the 2022 Olympia contest, Labrada believes Derek Lunsford, William Bonac, and Andrew Jacked to be ‘major’ wild cards.

Labrada doesn’t see the impending showdown with Big Ramy as a ‘David versus Goliath’ situation. He believes the improvements he’s made since last year will carry him to victory. Specifically, Hunter said his waistline and shape make for a more ‘even playing field’ this year.

You know, obviously, he’s going to be the biggest person on stage by far, but I’ve added size to the places I needed to and maintained my waistline and I have my shape… at the end of the day, it’s not a David versus Goliath thing in my book. I feel it’s a little more of a level playing field for me and some of the guys.”

Unlike seasons prior, Ramy has been more open about his preparations and training. Back in Sept., Samir Bannout noticed Ramy’s ‘imbalanced’ back development, which perhaps is the same issue Hunter is referencing.

“If I had to say a weakness, you know, it’s more a structural thing. It’s just the lower lat [and] the lower back area. You know, I’m one to talk about it. But if I had to nitpick his physique, that’s what I would say for sure,” says Labrada.

Earlier this month, Big Ramy spoke with seven-time Mr. Olympia Phil Heath about his prep. The reigning champion said he plans to step on stage weighing around 295 pounds. As it stands, most of the coaches/gurus who have appeared on podcasts have backed Ramy to win next week.

Labrada will look to capture his first Mr. Olympia title but will face one of the deepest Men’s Open lineups in years. With a ‘level playing field,’ Hunter hopes to find success against Ramy with his shape and added size.