The former 1983 Mr. Olympia gave his thoughts on the Men's Open division less than 16 weeks from the biggest bodybuilding show of the year. 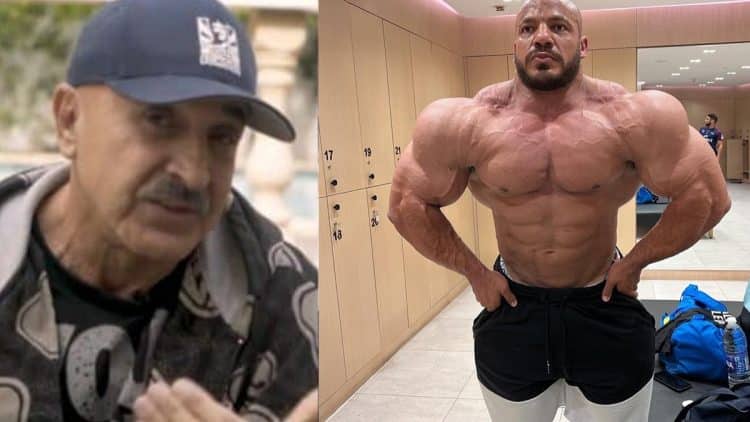 Golden Era’s Samir Bannout has developed a keen eye for the sport given his experience competing at the highest level. In the latest episode of The Muscle Maturity Podcast, Bannout dissected the Men’s Open division and gave reasons as to why he believes Big Ramy (Mahmoud Elssbiay) will defend his title again later this year.

During his time competing as a Pro, Samir Bannout reached the pinnacle of the sport in 1983 when he won his lone Mr. Olympia title. He has competed with some of the best bodybuilders to emerge in the IFBB Pro League, like six-time Olympia winner Dorian Yates, eight-time Mr. Olympia Lee Haney as well as bodybuilding icon Arnold Schwarzenegger.

After retiring in 1996, Bannout routinely shares his opinions regarding the sport he once dominated. He discusses sensitive topics too, like bodybuilding cycles and protocols. In particular, he recently gave his thoughts on three-time Classic Physique Olympia champion Chris Bumstead’s ‘decreased’ cycle. Bannout advocates for smaller cycles and said Schwarzenegger looked his best on only two compounds.

New contenders continue to emerge in the Open this year, like 2022 Texas Pro winner Andrew Jacked and the newly signed NPC athlete Michal Krizo. In addition, the top competitors at last year’s Olympia contest are making improvements, like Ramy, who recently shared a massive physique update weighing 337 pounds. The next Mr. Olympia contest takes place this December, which has prompted the bodybuilding community to discuss the Open class at length.

Samir Bannout on ‘Super Massive’ Big Ramy: ‘I think Brandon Curry will Be His Toughest Competition’

During the podcast, Samir discussed Big Ramy and many of the Open class contenders headed for 2022 Mr. Olympia.

“I saw the pictures… I thought his upper body looked great. Here’s exactly what I saw: I mean shoulders to waist ratio is really good. I don’t know if it’s necessary to be 330-something. The thing is — I want to see the balance between his thighs and calves. Shoulders… what I see here that one pose looks really good. Super massive,” Samir Bannout explained.

“He’s definitely going to be the biggest on stage. To me, it’s not always the biggest who wins, but he looked pretty symmetrical on top. His chest looks good, he looks good from the side. I’d love to see his legs and the whole body. That would be interesting to see the entire combo, but he looks impressive.”

Bannout asserts that if Ramy’s legs match his current upper body, the combination will be incredibly hard to defeat on stage. He has already stated that he believes 2019 Mr. Olympia Brandon Curry is Ramy’s biggest threat and echoed that sentiment again in the latest podcast.

“Ramy is massive and what I saw in the past few days on the internet, he looks really impressive, but bodybuilding cannot be judged half-body. You got to look at the entire picture. I mean, his legs, I’m sure their huge. I’m looking at the combo… I still think Brandon will be his toughest competition if Brandon comes in ripped. I don’t think he’s coming in ripped. Of course, Ramy is going to be bigger.”

According to Bannout, even if Hadi Choopan comes in shredded this year, he will still struggle with Big Ramy’s size. While Samir indicated that mass monster Michal Krizo is a threat to the title, the bodybuilder has yet to earn his pro card or an invitation to Mr. Olympia.

“I think Hadi probably will be super etched, ripped and probably bigger than usual. But standing next to Ramy, nobody is going to look big enough. But also [Michal] Krizo, Krizo… I really believe he will be in the top five. He will be in the top five. Standing next to Ramy is not going to be easy and you know, the judges really nowadays they favor the mass. This is one thing I don’t agree with,” Bannout shared.

“Let’s say if Ramy has the legs matching to that upper body, if they flow good — oh my God, nobody is going to touch him. I worry about the balance between his size and calves. His size looks good. Ramy in the side-chest is incredible,” Bannout added. “His calves need to actually be three inches bigger to match his size.”

“I would still think Brandon and Hadi, these are the top three for sure,” says Bannout. “

Fourth place 2021 Olympia finisher Hunter Labrada has been working hard this year to bring an improved package. In Bannout’s opinion, Hunter appeared to be holding too much water at last year’s contest. He added that if Hunter comes in ‘etched,’ he has the potential to place in the top three.

“Hunter [Labrada has a smaller waist, shoulder to waist ratio is better and his legs are really good. So, we’ll see — I mean, I thought Nick looked harder than Hunter last year, but the judges picked Hunter because he probably flowed and showed his body differently.

I think Hunter needs to be a little bit more dryer. If he comes in etched like Hadi… if Hunter comes in etched like Hadi, he would probably make the top three but I think he needs a little bit more clarity to his muscle. Nick has more clarity, more onion skin. I think Hunter was slightly watery [at 2021 Olympia], and I don’t think this because of his diet. I think his nerves may have caused that,” Bannout told Nick and John.

To combat Ramy’s size, Brandon Curry revealed earlier this year that his plan is to add a considerable amount of muscle mass. However, Bannout believes Brandon should focus on entering the contest as shredded as possible.

“It’s a fine line. When you say you’d like to see Brandon more plump and full — I’d like to see him more shredded. I’d like to see him more etched and the only point I can criticize about Brandon is he needed to bring the back part of his hamstring, the lower part, just above his calves, that’s what really hurt him last time. If he comes in also shredded, you know his package is beautiful. He has a beautiful physique,” says Samir.

“The only medicine for Brandon is to be more shredded. Ultra-shredded. Whatever he did in Kuwait, he looked good. Don’t get me wrong, but I see more room for improvements. For example, Ramy last year, he didn’t look that great during the prejudging and he came in etched the following day,” Bannout added.

Before ending the discussion, Samir also predicted that Hadi Choopan will be a threat to the title. He added that he believed Choopan should have placed better than third last year. Despite speculation about site enhancement oils, Samir doesn’t think that should hinder Choopan’s chance of winning.

“The most impressive pop-up muscle I saw, Hadi had it. Hadi’s always pop up and look like silky. I thought Hadi deserved better [than third place at 2021 Olympia] honestly,” Bannout added. “He was very sharp, he looked good all around. People complain about his shoulders being loaded. Come on guys. Like nobody else is loading their shoulders.”

The bodybuilding veteran hasn’t been shy about his 2022 Mr. Olympia predictions. In fact, Samir made headlines last week after suggesting that Michal Krizo will win Olympia on his first try despite having yet to earn a pro card. Bannout also shared that he believes Michal Krizo has bigger arms and a better v-taper than rising star Nick Walker.

Many believe this year’s Mr. Olympia show has the potential to be one of the greatest contests in the sport’s history, including bodybuilding legend Jay Cutler. After dissecting the IFBB’s Open class, Samir Bannout sees Big Ramy walking away with another Sandow trophy in large part due to his monstrous size.