The reigning 212 Olympia champ and Hunter Labrada shared possibly their most impressive updates of the season. 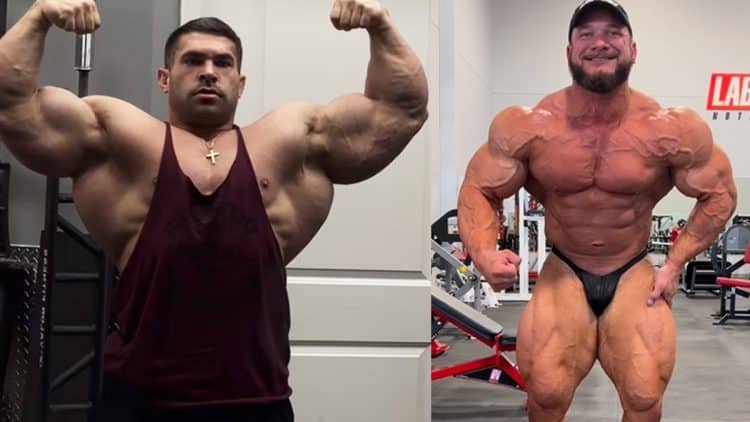 Anticipation for this year’s 2022 Mr. Olympia contest continues to build as contenders Derek Lunsford and Hunter Labrada finalize their contest preps. In a pair of posts made to Instagram, Lunsford and Labrada presented arguably their most impressive physique updates of the entire season.

In preparation for 2022 Mr. Olympia — bodybuilding’s most important event of the year — competitors are dialing in their efforts to bring their best packages possible. Already, four-time Olympia winner Jay Cutler has said this year’s contest has the potential to be one of the greatest ever.

This season has been full of surprises, especially for 212 standout Derek Lunsford. He last-minute guest posed at the 2022 Pittsburgh Pro, where he shared the stage with a crop of Men’s Open threats like Nick Walker, Brandon Curry, and Hunter Labrada. Shortly thereafter, his coach Hany Rambod began to suggest that Lunsford was struggling to safely make weight for the 212 division.

For months, speculation brewed online regarding Lunsford’s future. In mid-September, he accepted a special invitation to compete in the Men’s Open division at 2022 Olympia. While he’s yet to confirm if he will in fact compete in Men’s Open or 212, the credentialed Pro will eventually have to choose one or the other.

Meanwhile, Hunter Labrada, son of IFBB Hall of Famer Lee Labrada, intends to improve from last year’s Olympia contest, a show that saw him finish in fourth place. Labrada has kept busy throughout the entire year with guest-posing appearances and training sessions. After visiting Mexico over the weekend, Labrada is back at his home gym, showcasing the recent changes to his physique.

Check out the latest updates from Hunter and Derek below:

In a post made to Instagram, Lunsford showed off a lean build with massive arms and a striated chest less than two months from 2022 Olympia.

Many figureheads in the sport have gotten behind Lunsford after he received the special invitation. Some in the community took issue with the invite, like Iain Valliere, who believes athletes should qualify for the event based on merit instead of waiting on an automatic qualification.

In a post made to Instagram, Hunter Labrada gave fans a sneak peek into the package he’s bringing to Las Vegas in hopes of overthrowing the champion.

“Back home, locked in, and changing daily👊🏻
–
Good thing, cause the ⭕️ is in 51 days🤯
–
280 fasted this morning for those that will ask👌🏻” Hunter Labrada shared.

In addition to handing out practical bodybuilding tips, Labrada is known for sharing his brutal training sessions. Earlier this month, he demonstrated how he’s been building his arms in prep with a sleeve-busting workout.

Derek and Hunter have been mentioned together before. Samir Bannout, a 1983 Mr. Olympia winner, thinks Labrada and Lunsford both have a chance at dethroning the reigning two-time champion Mamdouh ‘Big Ramy’ Elssbiay. He told them to not show ‘any weaknesses’ on stage and shared that the champion can be defeated with effective posing.

Unlike previous seasons, Big Ramy has been more open to sharing his progress photos with fans. He continues to warn his competition with physique update after physique update. Former champions of the sport like Ronnie Coleman are so high on Ramy that he even congratulated the 38-year-old on his future victory and third Sandow trophy.

The surprise factor at this year’s Olympia makes the show even more exciting. It’s evident by their recent physique updates that preparations for Lunsford and Labrada are reaching a boil.