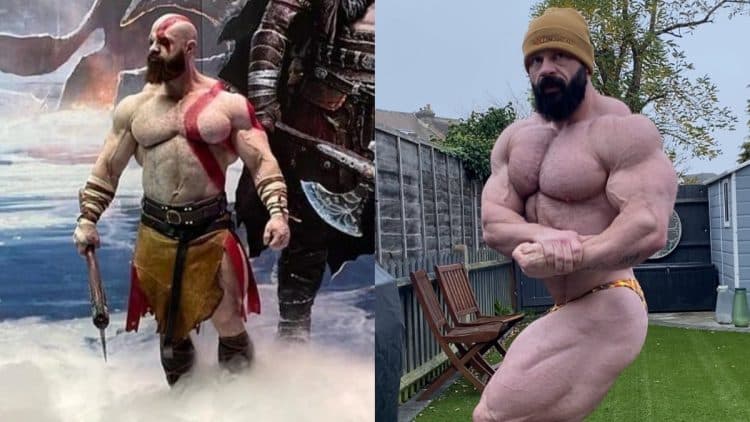 IFBB Pro James Hollingshead first gained attention for his insane size and strength in the IFBB Pro League as a Men’s Open standout. In a recent Instagram post, Hollingshead cosplayed the famous character Kratos from the action/fantasy video game series God of War at the 2022 MCM London Comic Con, which took place this past Oct. 28-30 at the ExCel Exhibition Entertainment.

He explained that he wanted to work on enhancing his physique to make a statement in his debut. The decision meant that Hollingshead would need to win a Pro show to get an Olympia invite and could not qualify on points via multiple top-rank finishes, per the Olympia Qualification system.

In July 2021, Hollingshead had to abruptly stop his training regime after testing positive for COVID-19. The time off forced him to stay at home and switch to his rest-day diet without any workouts.

James hinted at possibly stepping away from professional competition in January. While retirement was certainly on his mind, he was not rushing into making any decisions. He shared a physique update where he appeared to have regained more of the muscle mass he lost.

James Hollingshead cosplays Kratos from ‘God of War’ at Comic-Con

In a recent post shared to his Instagram, James Hollingshead cosplayed Kratos from the famous Santa Monica Studio video game God of War at the 2022 MCM London Comic Con.

Hollingshead can be seen showing off his gigantic chest, shoulders, lats, and overall size to bring the fictional titan to real life.

James will look to improve his standing from last year’s Mr. Olympia, where he finished 12th in his debut. In April, he shared a grueling shoulder and tricep workout routine that focused on the front and side delts along with the triceps. He smashed through the workout at a high pace and revealed that he tipped the scales around the 300-pound range.

Hollingshead is determined to turn things around after enduring a harsh season in 2021. He recently lifted a massive 750 pounds for three reps and 661 pounds for nine reps on the squat in a brutal leg day training session a few months ago. He wore knee wraps and a lifting belt to perform the lift using a squat rack.

In August, ‘The Shred’ gave a look into his huge preparations for the 2022 Arnold Classic UK show. He shared a push workout that he utilized to get ready for the contest. James faced serious competition from rising prospect Andrew Jacked, real name Chinedu Andrew Obiekea, and eventually placed third behind Andrew and Patrick Johnson.

Hollingshead finally punched his ticket to the upcoming Mr. Olympia 2022 with a win at the 2022 Tsunami Nutrition Cup in Rome, Italy, which took place this past Oct. 9. Based on the latest updates, James Hollingshead will look to dial in his diet and training plan in the remaining few weeks to bring an improved package to the nearing Olympia.

Following an uneventful season in the sport last year, bodybuilder James Hollingshead is determined to have an impactful 2022 by...

Bodybuilding is an unforgiving sport with monumental highs and some unfortunate lows. Notable figures in the sport, Iain Valliere and...

After being forced to sit out of last year's Olympia, James Hollingshead has a chip on his shoulder coming into...