"The Shed" gave fans a sneak peek into the massive package he plans to bring to the 2022 Arnold Classic UK show. 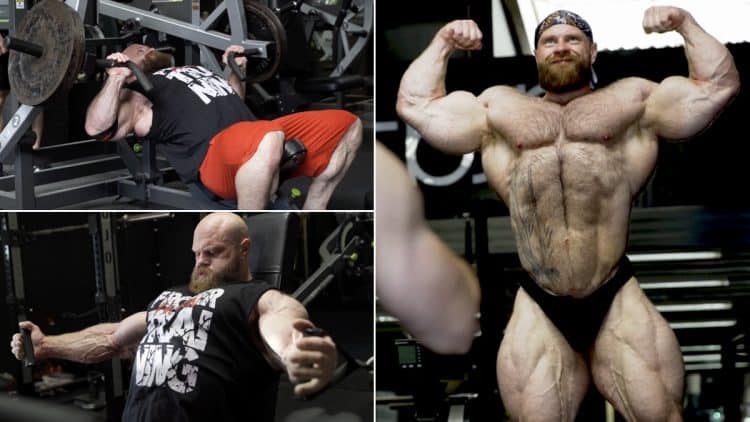 Men’s Open standout James Hollingshead has developed a reputation in the IFBB Pro League with shocking size and jaw-dropping strength. In a recent video published on YouTube, Hollingshead showed off his physique with a push workout ahead of the 2022 Arnold Classic UK contest.

Aptly nicknamed “The Shed,” James Hollingshead is a dangerous threat at contests because of his muscle thickness and width. His impact on the Open class was felt quickly after he won the 2020 Europa Pro Championships. He proved his consistency that same year by earning gold at the 2020 British Grand Prix around a month later. This victory earned him the opportunity to compete against the best at 2021 Mr. Olympia.

His 2021 season was far from ideal as the bodybuilder opened up about a Covid diagnosis that left him unable to train for large parts of the season. Despite the setbacks, Hollingshead made it to Olympia last year and finished the prestigious show in 12th place, respectively.

This year, Hollingshead has yet to compete at a bodybuilding show, but that will soon change. Back in April, he showed off a demanding shoulder and triceps workout. It was evident that his work in the gym was paying off after he demonstrated a massive 750-pound squat for three reps during his off-season. Determined to grace the O stage once again, Hollingshead is back at it, building a fuller chest, sharper triceps, and deeper abs.

In preparation for the 2022 Arnold Classic UK competition on September 23-24, Hollingshead went through an exhausting push training session. He started the workout with the incline Prime before moving on to dumbbell lateral raises.

After lateral raises, James performed on the Prime shoulder press machine as well as the Prime incline, which he adjusted throughout the exercise to optimize his range of motion.

He followed that up with Prime dips, then performed two sets on the Vulcan extension machine. He topped off the training session with the pec fly while using the Prime fitness functional trainer.

“Two sets on the Prime dip. Possibly then two sets on the Vulcan extension and then we’re going back to one exercise on each again, which will be the pec fly using the Prime fitness functional trainer — really great piece of equipment. Then, we’ll do a second lateral variation probably with cables of some sort.” Hollingshead explained. “Then we’ll finish up with a triceps overhead extension and polish off some abs.”

According to Hollingshead, he trained six sets on each body part, which included chest, shoulders, triceps and his abs.

Hollingshead Reflects on his Bodybuilding Mentality, Gives Physique Update: “I’m Happy with How I Look”

With his first show of 2022 less than a month away, Hollingshead opened up about how he’s feeling about his current physique.

“I’m pretty happy with how I look. Hollingshead said. “Enjoy bodybuilding for you. Put yourself first and don’t be too [concerned with being] compared. Don’t think about everyone else all the time. Life is too short.”

“Focus on being the best you. If the best you brings you the golden ticket to the Olympia or a medal or award — nice. Good feeling. Good for me. But if it doesn’t, don’t let that dictate how you feel about yourself. Don’t let that take away from your own gratifications or your own efforts.”

Hollingshead will be tasked with facing Andrew Jacked at the Arnold Classic UK event this September. Jacked won his pro card earlier this year at the 2022 Arnold Classic Amateur. At his first pro show, he showcased an incredible package at the 2022 Texas Pro and won the contest. Given his momentum and hype, even legends like Jay Cutler are comparing Jacked to reigning Mr. Olympia Mamdouh “Big Ramy” Elssbiay.

As of this writing, Hollingshead has not qualified to compete at 2022 Mr. Olympia. With a month until his next show, James is happy with his look and plans to dominate at the Arnold Classic UK regardless of who else is competing at the show.