The bodybuilding veteran believes Krizo has the potential to win Mr. Olympia on his first attempt. 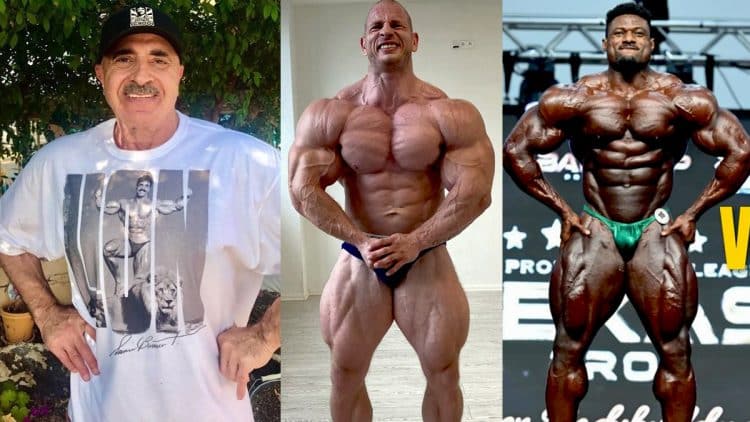 Samir Bannout is extremely confident in Michal Krizo’s potential in the IFBB Pro League despite having yet to earn his pro card. In a recent video, Bannout predicted Krizo would not only defeat Andrew Jacked but also earn an Olympia title in his debut at the contest.

This year’s bodybuilding season has been filled with exciting rookies looking to make their mark in the sport. One of those rookies is Michal Krizo, who recently made the switch from the IFBB Elite Pro League to the NPC last month. Krizo’s switch was welcomed with open arms, as he made a legends tour around North America.

His first stop saw him visit bodybuilding coach Milos Sarcev at the famous Dragon’s Lair Gym in Las Vegas, Nevada. The visit left Sarcev impressed. He said pictures of Michal Krizo simply don’t do the bodybuilder proper justice and predicted he will have a major impact on his new league.

In addition to Sarcev, the rising Open class competitor sought out bodybuilding legend Jay Cutler. Following his first impression of Krizo, Cutler said he was the real deal and predicted he will be a problem for the rest of the Men’s Open division. Ever since joining the NPC, Krizo has routinely shared physique updates and the results are promising. Last week, he shared an image of himself shredded weighing 293 pounds.

Another Men’s Open competitor attracting attention is Flex Wheeler‘s pupil, Andrew Jacked. Jacked earned his pro card at the 2022 Arnold Classic Amateur event earlier this year. He entered his first pro show a few weeks ago at the Texas Pro and won the contest handily. As a result of the victory, he earned his invitation to compete at Olympia this winter.

This isn’t the first time Samir Bannout has said Michal Krizo has a bright future. The last time Krizo was the topic of conversation, Bannout suggested that he had bigger arms and a better v-taper than 2021 top five Olympia finisher Nick Walker.

He has also predicted that Andrew Jacked will make top four at Olympia. With the biggest event of the year in less than 17 weeks, Samir Bannout discussed a potential showdown between Krizo and Andrew Jacked.

During the latest episode of The Muscle Maturity Podcast, Samir Bannout talks about Krizo’s potential at 2022 Mr. Olympia.

“I totally agree. I think he’s capable of getting the pro card on his first try and not only that, I put him in my story yesterday as I think he could actually win — not make the top five, he could win. It would be easy for him to make the top five, very easy. The thing is: I also said he needs to do minor minor professional modifications to his presentation and just peak properly. I don’t really think he’s missing anything.” Samir Bannout said.

In Samir’s opinion, Krizo has what it takes to win Mr. Olympia.

“Shoulders are incredible, arms are incredible, round chest, small waist, hamstrings… he’s got it all and waisted at the same time. The thing is, I went ahead and told him; I sent him a message. I said, ‘bro, I’m really impressed. I really think you’re capable of winning the Olympia.’ So, he replied to me and said ‘thank you so much Samir. I really believe it’s going to be tough this year.'”

Bannout added that he thinks Krizo’s will ‘automatically’ make the top three, if not win the show outright.

“He’s really really capable of taking this show. I’m just saying it from my perspective — what he has as a combo… it will automatically qualify him to be in the top three for sure but could win.”

“I predict that he could definitely make the top three if he peaks properly and pose properly.” says Bannout.

Samir Bannout gives the edge to Michal Krizo in a battle against Open standout William Bonac.

“Bonac for example, he comes in ready but if you look at comparing physiques, shoulder-to-waist ration, and roundness from the front, from the side… I also believe Krizo has the edge. Samir Bannout said. “I mean he’s not going to get killed in the back.”

According to Bannout, 2022 Arnold Classic winner Brandon Curry is the ‘most dangerous’ competitor out of the entire Olympia lineup.

“I have to say something. Brandon [Curry] is the most dangerous. If Brandon comes in shredded, it’s going to be between Krizo and Brandon. You know me, I always look at the beauty and the flow of the body, and Brandon has that.

“Now, who has more separation and striation and who was more professional showing it? If I give take let’s say C-Bum posing performance and put him on Krizo… I’m telling you; he’s going to win the fuc**ng show. That’s my opinion.”

“Krizo will [win against Andrew Jacked].” Samir said. “Andrew is massive though. Andrew is massive. You know why Andrew is really really good, he’s massive and waisted. It’s really hard to predict it 100%.” says Samir Bannout.

As of this writing, Krizo announced his plan is to earn a pro card by winning the 2022 Amateur Olympia Italy contest in early October. Then, will try to qualify for Olympia by winning the Prague Pro in the same month.

The future is bright for Michal Krizo and Bannout doesn’t see Andrew Jacked standing in the Slovakian mass monster’s way. Should Krizo peak and polish his posing skills, Samir Bannout believes he has the potential to win 2022 Mr. Olympia, assuming he earns his qualification.

How To Do Wall Push-Ups – Muscles Worked, Benefits, and Alternatives