Priest wants to eliminate the 212 division and see the prize money go to the Open division: 'the 212 guys have proven they can stand there.' 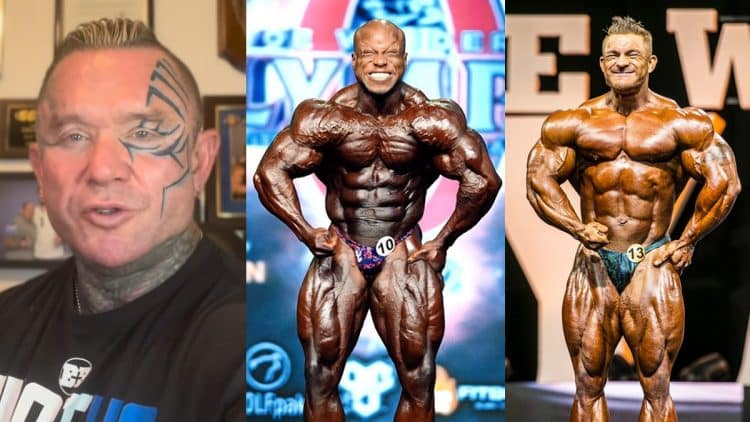 Lee Priest, one of the first ‘giant killers’ in the IFBB Pro League, is calling for the removal of the 212 Bodybuilding division. In a recent interview with Rx Muscle, Priest argued if a 212 competitor is good enough, they should be able to stand with other Open athletes on stage.

The 212 Bodybuilding category was introduced in 2011 for shorter individuals who struggled to match the size and muscle mass of their taller counterparts. Some consider the 212 division a downsized version of the Men’s Open. When the category was first created, the height limit stood at 5″5′, though that rule was eventually removed. However, competitors must weigh 212 pounds or less.

The 212 division was nonexistent when Lee Priest competed, but competitors from the category are thriving today. In fact, two former 212 bodybuilders – Derek Lunsford and Hadi Choopan, finished first and second place at last month’s 2022 Olympia competition in the Open division.

Another bodybuilder to make the jump was former 212 Olympia Kamal Elgargni. He competed at two Men’s Open contests last year, where he placed second and fourth. Interestingly, he was outsized by mass monsters at both events.

Speaking with Dave Palumbo, Priest talked about ending the 212 division. In addition, he discussed the upcoming 2023 Arnold Classic, taking place from March 2-5 in Columbus, Ohio.

Priest’s reasoning is simple: 212 bodybuilders who are good enough should be able to stand with the ‘best of the best.’ He added that all of the prize money for 212 Bodybuilding should be redistributed to the Men’s Open division.

“Because we’re seeing some of these 212 guys get up there, look Hadi was 212, he won the Olympia. Derek, we’ve seen Shaun Clarida, if he does well in this… yeah Bonac, I say get rid of the 212 class and use that money for the Open, so you can distribute more money in the Open. Get rid of 212, if you’re a good enough bodybuilder, you should be able to stand with the best of the best.”

According to Priest, Shaun Clarida, Kamal Elgargni, and Derek Lunsford — three 212 Olympia champions, have already proven their ability to compete in the Open.

“The good shorter guys, Shaun Claridas, Dereks, even Kamal was 212 wasn’t he, these guys have done well in Open classes. If you’re a good bodybuilder, it doesn’t matter your height, your weight, Shaun Clarida has proven that. If you’re good, you can stand in an Open lineup. Get rid of it.”

“I had to do it the normal way, so they can fuc**ng do it,” Priest said. “It doesn’t matter. Flex Lewis would have held his own easily in the Open class. I think even initially, because he had the shape, he would have done okay. The thing is, if you are in the Open, it makes you train harder and do whatever.”

A few weeks ago, bodybuilding legend Flex Wheeler suggested Shaun Clarida was the frontrunner to win the 2023 Arnold Classic. Priest agrees with Wheeler and says Shaun could shock the world if some of the bigger guys come in off.

“I think it’s good [Nick Walker jumped in]. I think because they upped the money it brought them out a bit more. I know even Flex Wheeler – he was saying Shaun Clarida could maybe win like I said. Nick Trigili did a whole video of how Flex Wheeler said ‘you should be this and that,’ but it’s true.

Look, I’m sure if Nick comes in at his best, no Shaun won’t win, or Andrew Jacked, but like I said, if Shaun comes in at his best, his proportions are almost perfect for his height, he’s not lacking anywhere, so if you’re picking faults on people, he really has none. So, it is feasible. If any of those bigger guys come in off, he could win,” says Lee Priest.

The upcoming 2023 Arnold Classic roster continues to surprise fans with late add-ons. Shortly after the Men’s Open prize money shot up to $300,000, Nick Walker jumped in and will look to capture his second title after winning the event in 2021. Andrew Jacked and Patrick Moore also announced their entries.

Earlier today, Mamdouh ‘Big Ramy’ Elssbiay, who dropped to fifth at 2022 Olympia, will seek redemption in Ohio and compete in less than six weeks. Many veterans have acknowledged Ramy was off in Vegas last month, even IFBB head judge Steve Weinberger.

The 2023 Arnold Classic will serve as the first major bodybuilding event of 2023 and a few divisions were removed from the show, like 212. Considering athletes from 212 are now finding success on Open stages, Priest believes the category should be removed from the IFBB Pro League indefinitely.