Shaun 'The Giant Killer' Clarida will face his teammate Nick Walker on the 2023 Arnold Classic stage in March: 'it's just business.' 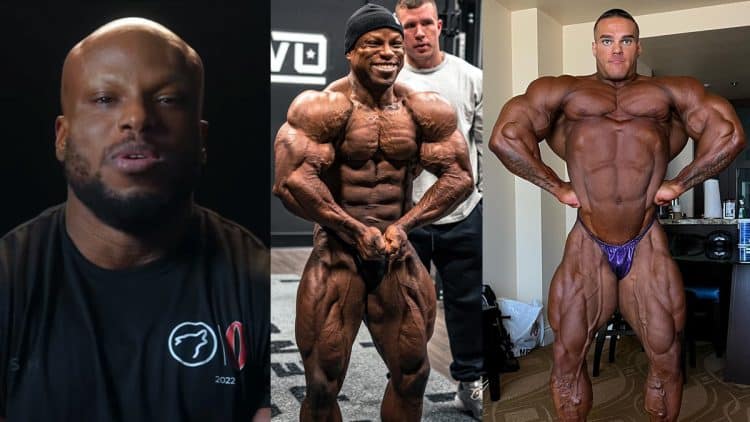 It’s all business for reigning two-time 212 Olympia Shaun Clarida at the upcoming 2023 Arnold Classic in Columbus, Ohio, from March 2-5. During a recent Olympia TV interview, Clarida discussed competing against his teammate Nick Walker in less than two months.

Shaun Clarida is slated to compete at his first Arnold Classic contest. He became an Olympia titleholder in 2020 with dense muscle mass, fullness, and 3D proportions. The following year, Shaun dropped his title to Derek Lunsford. Months later, Shaun won the 2021 Legion Sports Fest Pro in the Men’s Open division, defeating Regan Grimes and Sergio Oliva Jr, which earned him the nickname, ‘The Giant Killer.’

In 2022, Clarida had to decide whether he would compete in the Open or the 212 Bodybuilding class for Olympia. Ultimately, he chose to go after the title he lost a year prior and dominated the Olympia stage with one of his most vascular packages to date.

With less than 10 Open class competitors signed up to compete at the 2023 Arnold Classic, Clarida was an instant favorite in the eyes of many bodybuilding veterans. Speculation about other competitors entering grew after the Arnold Sports Festival announced the prize money for first swelled to $300,000. As a result, Clarida’s teammate Nick Walker jumped in.

Shaun Clarida, joined by Flex Wheeler, discussed the upcoming competition and facing off against his teammate Walker. The reigning 212 champ also broke down his current prep and some of his goals for the next few weeks.

Shaun Clarida Recaps 2022 Olympia, Talks Battle With Nick Walker: ‘We Can Be Friends Off The Stage’

Before talking about the 2023 Arnold Classic, Clarida recapped his recent Olympia showing.

“It felt amazing [on the 2022 Olympia stage], obviously I had a lot of motivation going into the Olympia, obviously with losing the title and the chance to win it back – you know, my baby girl being born, I felt great. It was the best package to date. Made a lot of improvements, some from last year — it felt good to get the title once again,” Shaun Clarida shared.

Given Shaun’s performance in Las Vegas last month, Flex Wheeler thought he would have done exceptionally well competing in the Open division, like Derek Lunsford.

“I do [think it was the most dominant performance] and Shaun can tell you what I texted him the day after the show. I said, ‘bro, you could have been competitive and possibly won the Open division [at Olympia], says Wheeler.”

Clarida said the upcoming showdown with teammate Nick Walker is ‘just business’ and that he’s coming to Ohio to beat anyone on that stage.

“Yeah, I just saw that today [Nick Walker entering the 2023 Arnold Classic] listen, business is business, it is what is it. We can be friends off the stage but when I get on that stage, again, it’s all business. I’m there to beat anybody that steps on that stage period,” Clarida said.

“Listen, we can be friends before the stage, and after I win and beat them all on Saturday, I’ll take them to breakfast on Sunday.”

According to bodybuilding legend Flex Wheeler, Clarida will win the 2023 AC handily. He doesn’t believe Samson Dauda will be able to compete with the level of Shaun’s conditioning.

“It’s always about matchups, so of course, if Samson [Dauda], if Andrew [Jacked] comes in with that type of condition, it’s about matchups. What are you going to do? I don’t think that’s going to happen. I haven’t seen that yet,” Wheeler shared.

Before ending the conversation, Clarida promised to bring the ‘same look he brought to the 2022 Olympia stage or better.’

“No, [I’m not making any modifications during prep] not at all. I play my own game. I know what works for me and what got me here. Obviously, we had a small rebound after the Olympia, but right now, we’re bringing things down a little bit. We’re going to bring that same look we brought to the Olympia, if not better,” Clarida said.

If Clarida continues to win pro shows in the Open division, Wheeler believes it won’t be long before he’s recognized as the greatest giant killer of all time.

“I think he’s in an argument for that already. It’s hard to say of all times. I don’t really believe in that right. Even when people try to include me in it, it’s very hard,” says Wheeler. “I have to go on what they have done. If you mark it up like that, then it’s going to be Shawn Ray. Second would probably be Lee Labrada, because of what they have done,” Wheeler added.

The last time fans heard from Clarida he opened up on facing mass monster Samson Dauda. He’s excited about the call-out and said he’ll even out-pose Dauda if he has to. In addition, Clarida will be tasked with facing Kamal Elgargni, who made his Open class debut last year at the Tampa Pro in second place.

If Clarida claims the 2023 Arnold Classic title, he will earn a massive payday and an instant qualification for the Men’s Open class at Olympia in November. Judging by the competitors list and prize money, many in the sport expect another shake-up to the roster before March arrives.