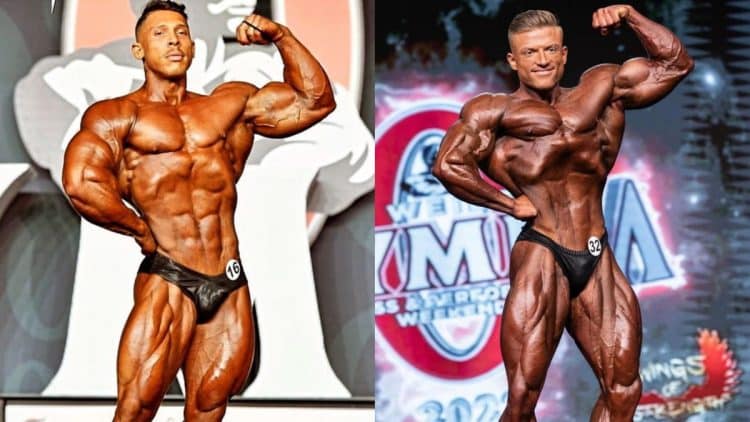 Former Mr. Olympia winner Samir Bannout always has his finger on the pulse of bodybuilding despite stepping away from professional competition. In a recent YouTube video, Bannout shared his thoughts on the upcoming battle between Ramon Rocha Queiroz and Urs Kalecinski at the 2023 Arnold Classic.

The 2023 Arnold Sports Festival is scheduled to take place March 2-5, in Columbus, Ohio. The full lineup for each division was announced earlier this month with the Classic Physique class set to host another showdown between Brazilian bodybuilder Ramon Rocha Queiroz and German sensation Urs Kalecinski.

Ramon Dino first rose to prominence for his incredible physique in the Classic Physique category in 2021. He turned heads on stage at the Europa Pro Championships and placed runner-up behind Fabian Mayr. He secured his first win of the year a few weeks later at the IFBB Musclecontest Brazil Pro.

Dino entered the 2022 season with a lot of hype behind him. He took his talents to the Arnold Sports Festival, where he defeated the likes of Kalecinski and former Olympia champion Breon Ansley. However, he fell short of two-time Arnold Classic champ Terrence Ruffin.

On the other hand, Urs Kalecinski made headlines in IFBB Pro League with deep separation and aesthetics. He made his Olympia debut in 2021 and placed fourth. Urs turned in a strong performance at the 2022 Arnold Classic, where he finished third behind Ramon and two-time champ Ruffin. He followed that up with a victory at the 2022 IFBB Boston Pro and Kuwait Pro before making his way to the Mr. Olympia competition.

There was a lot of anticipation going into the Olympia last month. Dino and Urs were set for a collision with four-time Classic Physique Mr. Olympia champion Chris Bumstead.

Dino received major backing from Samir Bannout as the biggest threat to Bumstead’s title. Meanwhile, Kalecinski, a friend of Bumstead, made it clear he wanted to dethrone his friend and said they would be enemies on the stage.

In the end, Chris Bumstead defended his title successfully at the 2022 Mr. Olympia. Ramon Dino finished runner-up while Urs took the third spot on the podium.

In a recent episode of The Muscle Maturity Podcast on YouTube, Samir Bannout gave his prediction on the upcoming battle between Ramon Dino and Urs Kalecinski at the 2023 Arnold Classic.

“I love Ramon’s body. I love his muscle quality. I’ve seen him better away from the contest than in the contest. I’ve seen photos where he was actually a little bit better than the contest. The complications of the weight classes, a lot of stress. Ramon was really under pressure, stressed out, and so that will change his conditioning somewhat believe it or not. But I think Ramon will win. He definitely has what it takes,” says Bannout.

Bannout believes Ramon has what it takes to upset Chris Bumstead in the future if he improves his back width.

“What impressed me a lot about Ramon is that he has beautiful arms and a beautiful flow to his legs and calves with a small waist. I think he needs to improve the width in his back, get slightly wider and he’s going to be dangerous for everyone, including Chris Bumstead. Ramon is a pretty complete physique. He just needs a bit more width in his back.”

Bannout expressed his admiration for Kalecinski’s impressive build but requested he bring up his arms.

“This is what really hurt Urs. His arms are weak and for me personally, no disrespect, the arms are so necessary because every pose you’re going to do, you’re going to use your arms. This is what made Arnold Schwarzenegger Arnold Schwarzenegger because of his arms. He used his arms in every pose. So, I hope he can improve his arms. If he improves his arms, he’s going to be very dangerous. But you need to put at least an inch or two on his arm. He needs to take a year of developing that arm.

“If he does that, he’s going to be a lot better next year but this year is a little bit too late to put on size.”

Bannout admitted Urs was better at posing than Ramon, who still has room to grow in that area of the sport.

“He’s a better poser than Ramon. In quality, they are about similar. Ramon’s got Popeye forearms, beautiful arms, and he’s got balance. Ramon needs help with posing.”

Following the Olympia, Bannout shared his breakdown of the results. Although he was captivated by Dino’s physique on stage, he encouraged him to take full control of each pose.

Urs Kalecinski is determined to redeem himself against Dino at the 2023 Arnold Classic. He’s excited to go head-to-head with Ramon one more time, and with ‘CBum’ out the way, the two will battle for gold in March.

Creatine Powder vs. Pills — Which Should You Get?