Gaspari questions what happened to Big Ramy's physique at 2022 Olympia: 'What happened to his back? When he hit that back shot, the whole lower mid back was gone.' 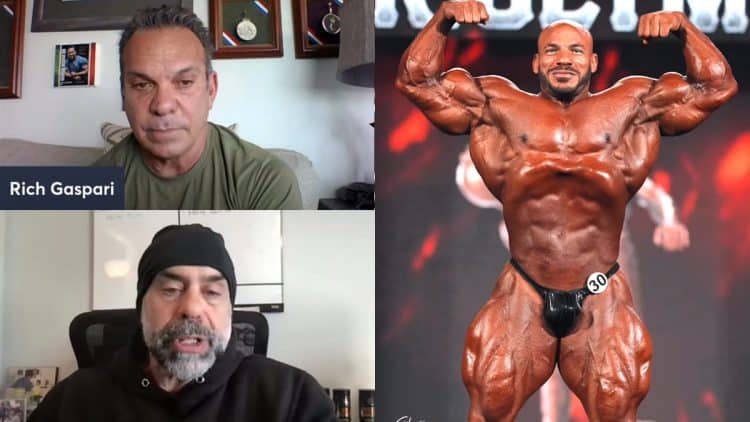 Mamdouh ‘Big Ramy’ Elssbiay is coming off a surprising performance at 2022 Mr. Olympia, where he missed the mark in fifth place. In a recent YouTube video, bodybuilding veteran Rich Gaspari claimed Ramy fell victim to a misguided prep in the build-up to the contest.

Former two-time Mr. Olympia champion Big Ramy rose to prominence in the Men’s Open division with exceptional mass and balanced proportions. He emerged as the winner of the 2020 Mr. Olympia, where he dethroned former champion, Brandon Curry for his first title. Ramy defended the title successfully in 2021 and was looking to add a third title last year.

Based on the physique updates Ramy shared just weeks out from the show, many were convinced he could pull off a three-peat. However, when it was time to step on stage, Ramy presented a noticeably different package. He ended up losing the coveted Sandow trophy to Iranian bodybuilder Hadi Choopan and dropped out of the top three, finishing in fifth place.

Following the result, Ramy congratulated Choopan on winning the 2022 Mr. Olympia and ensured fans that he would come back stronger than ever. His underwhelming performance became a hot topic as members of the community were left puzzled about what went wrong.

Retired bodybuilder Dennis James, a friend of Ramy, believes he looked fine one week out from the show. He added that Ramy lost his look as the show got closer and appeared flat hours before prejudging.

Bodybuilding icon Jay Cutler was confident Ramy would retain the title but admitted he was wrong after the event. He highlighted the problem with Ramy’s lats and conditioning level as the main reason for his loss to the ever-consistent Choopan.

Meanwhile, IFBB head judge Steve Weinberger discussed Ramy’s fall to fifth as well. He believes the bodybuilder that showed up in Vegas last month was ‘not the Ramy we know.’ Moreover, he indicated that Ramy was missing a few body parts and might have sustained an injury.

King Kamali theorized that Big Ramy missed the mark due to taking too many diuretics before the show. He argued the overuse could have resulted in his muscles being flattened out for about 48 hours.

In a recent video uploaded on YouTube, Rich Gaspari shared his thoughts on what went wrong for Big Ramy at the 2022 Mr. Olympia last month.

“When you are this ripped two weeks out, when you start manipulating carbohydrates, taking diuretics, start carb-loading, sodium-loading, whatever these guys are doing it’s causing them to f**k up. That’s why he was missing what he looked like. His back looked unbelievable but what was weird was that on the Olympia stage, his whole lower part of his lats were missing. What happened to his back? When he hit that back shot, the whole lower mid back was gone.

“I think what happened with Big Ramy is that he went into a carb depletion cycle then went into a carb loading cycle along with diuretics when he was starting to try to fill out,” added Gaspari. “I’ve taken diuretics and it actually screwed me up. They made me hold water. I was taking diuretics and carb loading thinking that any excess water is going to get out of your body. But what happened to me was the water went on the outside and didn’t fully go into the muscle.

“These guys are carb depleting, and then they are carb loading and at the same time they are taking diuretics to prevent that spillover in eating carbs… This is happening to all of these guys. His prep coach misguided him.”

Renowned bodybuilding guru Hany Rambod gave his take on Ramy’s uneventful appearance recently. He argued Ramy looked flat, watery, and faded in terms of muscle clarity and definition. While he did not speculate much further, he believes Ramy’s team knew what went wrong.

Last week, Men’s Open competitor Iain Valliere chimed in on the situation by suggesting that Ramy might have suffered severe nerve damage due to steroid injections. Dennis James also disclosed that Ramy was seeking treatment for disc degeneration, which restricted proper blood flow to the muscles and disallowed his physique from activating properly.

You can watch the full video here