Slovakia's Michal Krizo recapped 2022 Olympia, talked about some of his rivals, and praised Brandon Curry for having the best upper body at the show. 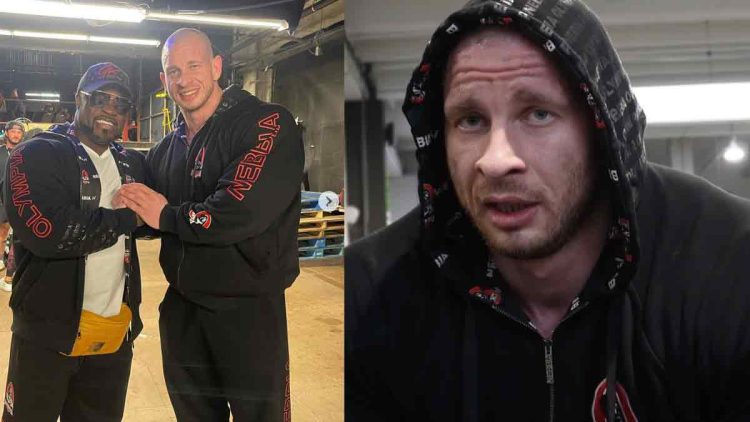 Mass monster Michal Krizo is shedding some light on the surprising 2022 Mr. Olympia results, which took place last month. Speaking on YouTube, Krizo recapped the weekend and believes Brandon Curry should have placed higher than fourth given his beautiful structure.

Back in December, the IFBB Men’s Open division was turned on its head after 2022 Olympia concluded with a new champion in Hadi Choopan. Weeks before the event, however, most veterans and fans thought Mamdouh ‘Big Ramy’ Elssbiay would comfortably retain his Olympia title.

The competition was full of surprises as Ramy was knocked down to fifth while Derek Lunsford, who accepted a special invite in Sept., shocked the world in second. Many, including bodybuilding legend Jay Cutler, made it clear the 2022 Olympia lineup was one of the strongest in years.

Nick Walker and Brandon Curry left Sin City in third and fourth, respectively. Meanwhile, Michal Krizo managed to capitalize on his Olympia debut in 12th place. Last year, Krizo took part in rivalries with Iain Valliere and Blessing Awodibu. Michal was able to surpass ‘The Boogieman’ on the Olympia scorecards, but Valliere squeaked past him in 11th place.

Weeks following his successful Olympia debut, Krizo opened up about some of the disappointments and explained why he thought Curry should have finished higher than fourth.

Michal Krizo: ‘I Saw Brandon Curry Placing Higher Than 4th, He Had The Best-Looking Upper Body’

Krizo believes Brandon Curry’s round and beautiful structure stood out on the 2022 Olympia stage. He maintains that Curry should have placed higher than fourth.

“Brandon Curry [was the most interesting bodybuilder on the 2022 Olympia stage]. We did talk a little bit yeah. He is a fan of newcomers. He even asked for a photo together you could see on Instagram. And even when I saw him, I really liked his physique. I saw him placing higher than fourth. But the conditioning wasn’t spot on. But he has the best-looking upper body in my opinion, round and beautiful.”

Even though there was hostility between Krizo and Valliere/Awodibu, it appears he squashed those beefs by the end of Olympia weekend.

“But everyone was cool — even Iain Valliere, who I thought was a dick, he was super cool. Blessing [Awodibu] – we had a long conversation with Blessing. When he jumped on the stage during the press conference and went before me, I was rolling on the floor laughing. Unfortunately, he finished last at the show. It didn’t work out for him, but he knew it wasn’t good.

I think he acknowledged it in a post. He says he’s not just a bodybuilder but also a showman. He made it more interesting because the press conference has never been this boring. The two of us made it interesting. I thought there would be chairs like it used to be, everyone would be seated next to each other in a row, each with a mic being passed, Bob [Chicherillo] would be asking the questions. [Instead] Now we’re just backstage and he called us out,” says MIchal Krizo.

Sharing an opinion similar to IFBB head judge Steve Weinberger, Krizo thought Lunsford’s back was harder than Choopan’s but was softer from the front. He also praised Nick Walker, Patrick Johnson, and James Hollingshead on their performances.

“Yeah [Derek Lunsford] looked good. He was hard from the back too, harder than Hadi Choopan but not from the front. Compared to Choopan he was soft from the front,” shared Krizo. “I kind of liked James Hollingshead but he’s also a giant. Patrick Johnson also looked pretty good. He [Nick Walker] always [posting his progress], he’s crazy, you see. But him too, totally different in person than to the internet — I mean his personality. No issue. He was doing his own thing.”

A number of veterans thought this year’s Olympia lineup was stellar, but Krizo doesn’t believe it compared to shows back in the 1990s, when bodybuilders like Dorian Yates, Flex Wheeler, and Shawn Ray were at the height of their careers.

“It was a weaker Olympia lineup [than] last year, I think. For sure, this was one of the best in the last few years. But it’s not like the 90s, the golden age.”

Krizo shared his bodybuilding ambitions publicly months ago. His goal was to get as big as possible, hoping to finish in the top 10 at 2022 Olympia. He came very close and plans to move into the top six at next year’s 2023 Olympia, scheduled to take place in the first week of November.

After a historic 2022 season that saw Krizo switch to the NPC, earn a pro card and qualify for Olympia, the future is bright for the 32-year-old. In the coming weeks, he intends to make the most of the rebound period following his first Olympia contest.