The Mutant and The Butcher join hands for a new episode of the 'Olympia Prep Series.' 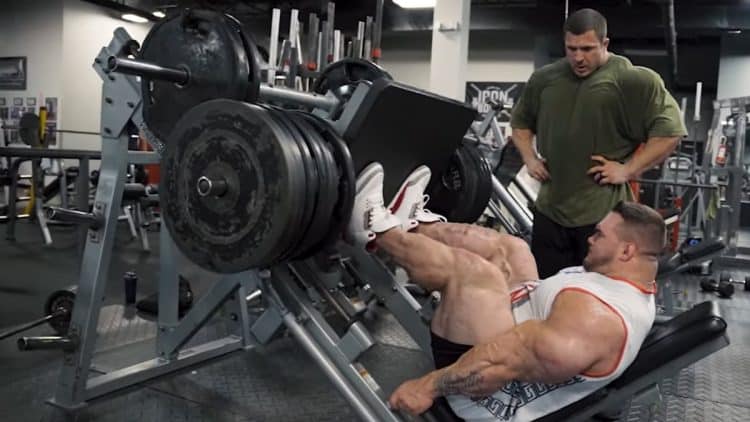 Nick Walker is an American bodybuilder that competes in the Open division of the IFBB Pro league. The 27-year-old won the 2021 New York Pro and the 2021 Arnold Classic within a year of earning his pro card and secured a fifth-place finish at the 2021 Olympia.

As remarkable of an achievement as it is, The Mutant is driven by the goal of winning the Mr. Olympia crown. To improve his physique further and successfully compete against other elite competitors, Walker took an extended break from competition after the 2021 Olympia. The Mutant started his competition prep for the 2022 Olympia in August. He recently partnered with his contemporary and Open division bodybuilder Brett Wilkin for a leg workout.

Wilkin earned his IFBB Pro card in the Classic Physique division but competed in the 212 division at the 2019 Puerto Rico Pro and Toronto Pro, earning 10th and sixth place finishes, respectively. He took two years off from competition after that and made his comeback in the Open division with a second-place finish at the 2021 Chicago Pro. The Butcher last competed at the 2022 Arnold Classic and finished sixth. He will attempt to win the 2022 Romania Muscle Fest Pro to earn his direct qualification for the 2022 Olympia.

Walker and Wilkin went through the quad-focused leg workout as a part of their competition prep. The video of this session was uploaded on Walker’s YouTube channel. So without further delay, let’s take a closer look at the detailed account of this training session.

Walker and Wilkin started the leg day workout with a few warm-up sets of this exercise to open up the hips and get them warmed up for the exercises that were to follow.

The duo next performed a few sets of lying hamstring curls to warm up the knee joints and hamstrings. This is important to improve mobility in the lower body while performing heavier exercises.

They got a few sets in, and at the end of the last set, Walker performed the eccentric phase of the movement with a slow and controlled motion. Wilkin spotted him to maintain an uninterrupted pace. Walker then returned the favor for Wilkin in his last set.

After getting the lower body sufficiently warmed up with the first two exercises, Walker and Wilkin felt comfortable increasing the intensity and working the quads. They took to the good ol’ leg press and worked their way up to the top set with 16 plates. The duo helped each other finish the grueling set before switching to the next exercise.

This was the second quad movement of the day. Depending upon the foot placement, the pendulum squat machine can help isolate the quads or hamstrings. Walker and Wilkin targeted quads for this particular workout. A pendulum squat machine does not require a lifter to go extremely heavy as the range of motion itself does wonders to bring about gains. The duo got a few sets of this movement under their belt and jumped onto the next one.

V-Squat on the Machine

Additionally, the V-squat is far less stressful on the knees and can be a good addition to the lower body workout for variety.

Walker and Wilkin performed a few sets of this exercise and proceeded to a few light sets of leg extensions.

This movement served as the finisher of Walker and Wilkin’s leg day workout. Leg extensions were added to the workout as the bodybuilder duo still had some gas left in the tank. They performed a few light sets of this exercise to enhance their quad development and called it a day.

The Mutant and The Butcher 2022 Olympia Leg Day Workout

Wilkin is ten weeks out of the 2022 Romania Pro, and according to the Olympia Qualification System, a win at the show guarantees him a spot at the 2022 Olympia. On the other hand, Walker is on the quest to win the 2022 Olympia crown, and the longest off-season of his career so far seems to have proven beneficial for him. Adding more detail and definition to his physique is his current goal.

The 2022 Olympia Men’s bodybuilding division is stacked. The reigning champion Mamdouh ‘Big Ramy’ Elssbiay, reigns supreme over the division. It will not be an easy task for Walker, Brandon Curry, Hunter Labrada, or Andrew Jacked to dethrone him.