In preparation for the 2022 Mr. Olympia, mass monsters Nick Walker and Hunter Labrada are not slowing down during their off-season. 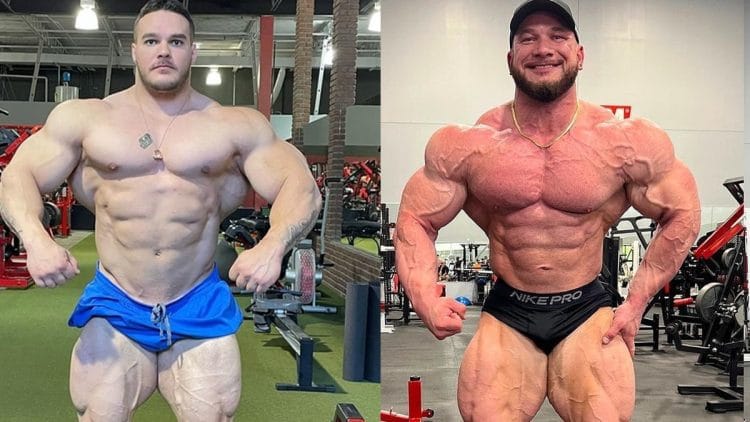 Men’s Open bodybuilders Nick Walker and Hunter Labrada are some of the most popular IFBB Pros in the league and went head-to-head at last year’s 2021 Mr. Olympia. As off-season prep picks up for Walker and Labrada, both athletes recently took to social media to show off the current gains they’ve made throughout this year.

2021 saw both men deliver incredible bodybuilding seasons. Despite having less experience than many of the athletes he stood next to (and defeated) on stage, Walker displayed an aura of confidence and remained focused on winning. He kicked off last year with a victory at the 2021 New York Pro. After earning his invitation to compete at his first Mr. Olympia contest, Walker proceeded to the 2021 Arnold Classic and won the event after predicting a first-place finish. He capped off a rookie season for the ages and made his debut on the 2021 Mr. Olympia stage, where he finished the show in fifth place. However, his rival, Labrada, took fourth.

Hunter Labrada, son of bodybuilding Hall of Famer Lee Labrada, made waves fast during his rise an IFBB Pro. His name only grew in popularity after winning the 2020 Tampa Pro. As a result of the performance, Labrada earned his invitation to compete at his first Olympia contest in 2020, where he managed to place eighth. Learning from his mistakes, he kicked off the next year in style, winning the 2021 Chicago Pro, defeating Brett “The Butcher” Wilkin, who placed second. Before ending his impressive season, Labrada showed up to 2021 Olympia and earned fourth place, outperforming his rival, “The Mutant”.

After their close encounter at 2021 Olympia, fans started to pick up on a low-key rivalry between the two. Typically, when Labrada shares an update, Walker is right behind him with his own, and vice-versa. In Walker’s opinion, he presented a ‘more complete’ package during his Olympia debut compared to Labrada. In spite of that, both bodybuilders will have the chance to face each other for round two this winter at 2022 Mr. Olympia, an event both men are qualified to compete at since they broke into the top-five at the show last year.

In recent posts made on Instagram, Labrada and Walker share the gains they’ve made during their off-seasons. According to Labrada, his weight is hovering around 282-pounds fasted.

Meanwhile, Walker is ‘holding’ at 293-pounds, courtesy of his recent update. The 2021 Arnold Classic winner is ‘really happy’ with how his off-season has gone thus far. The 27-year-old added that he feels he’s getting better at this weight and his strength is still on the rise.

“Little update before we enter a little recomp phase before turning it up for prep.

Weight is holding at 293, just getting better at this weight, strength is still progressing, digestion is always on point. Really happy with the way this off-season has went, but I’m even more hype for this prep to begin.” Nick Walker posted.

The two Men’s Open bodybuilders were present for a guest posing appearance at the 2022 Pittsburgh Pro last month. After reigning Mr. Olympia Mamdouh ‘Big Ramy’ Elssbiay was unable to attend, reigning 212 Olympia winner Derek Lunsford took his place. This gave fans the opportunity to see Walker and Labrada back on the same stage, and even while guest posing, they appeared to be neck and neck.

With 2022 Mr. Olympia abound, Walker and Labrada will once again meet on stage, and fans are counting down the days until these two battle for supremacy. Given the physique updates Walker and Labrada provided, it appears they are both on track for an explosive year in the sport.