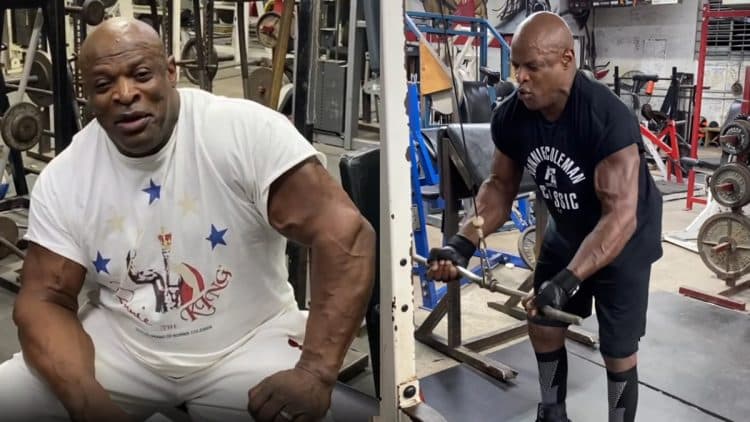 Legendary bodybuilder Ronnie Coleman is widely regarded as one of the best bodybuilders ever. In a recent video posted on Instagram, Coleman performed a set of reverse grip trice pushdown and shared his love for lifting and working out in a reflective post looking back at his younger days.

Eight-time Mr. Olympia Ronnie Coleman shares the record for the most number of Sandow trophies won with fellow icon Lee Haney. Coleman took the Men’s Open division to another level with unparalleled size. The mass monster was renowned for lifting over 800-pounds on the squat.

Coleman set the new gold standard for up-and-coming prospects, who looked up to him during his dominant run on the Olympia stages. Jay Cutler, a four-time Mr. Olympia winner, took inspiration from Coleman’s grueling high-volume workouts and followed in his footsteps before Coleman finally got dethroned by Cutler in 2006. ‘The King’ has long moved on from professional competition but remains an influential authority in the community due to his glittering resume.

Coleman never shies away from helping the next generation.  He partnered up with fitness influencer Jesse James West to complete a series of intense exercises in July.  As Jesse got through the workout, his mentor gave him plenty of motivation and repeated his famous catchphrase, “light weight baby! ”

Coleman endured a lot of adversity during his run at the top. While preparing for the Arnold Classic, Coleman ended up with a herniated disc in 1996 but he did not let it hold him back from lifting heavy. In 2018, he revealed that he had had more than ten surgeries just on his back.  Despite the fact that he was unable to move around without a wheelchair for a period of time after the surgery, he never let these obstacles deter him from achieving his fitness goals.

In a recent post made on Instagram, Coleman can be seen doing reverse grip triceps pushdown. The 58-year-old has shown no signs of slowing down and stays an inspiration to this day.

“I know what you guys are thinking. Why is that almost sixty year old guy still working out. He has nothing to prove anymore. Well I do it because I love it. I do it because it is my hobby and I look forward to doing my hobby every day. One of my other hobbies is fishing but I don’t have a boat and my unstable condition makes it a little difficult to be going to the lake and renting a boat and trying to bait a pole and so on and so forth.

“But I do love to fish and went everyday when I was in high school because the Bayou was right down the street from my house. I use ride my bike there everyday. I didn’t catch my fish but I had a lot of fun trying and it was very relaxing.

“Those were the good ole days that I miss very much. There was no social media, no email, no cell phones. Hell there was hardly any cameras back in those days. If you had a camera it was very expensive,” he wrote.

Ronnie Coleman had shared an insane leg workout while riding an incumbent bike. Although his feet went numb he refused to give up and powered through the cardio workout using his hands. Coleman embodies the “no excuses” mindset, and it’s no surprise that he managed to win eight Olympias.

Whether you’ve got a Bowflex home gym already or are thinking of buying one, you’ll be glad to hear these...