The 1983 Mr. Olympia believes Ronnie Coleman's love for lifting heavy weights came at a substantial cost: 'he pushed himself to the limit.' 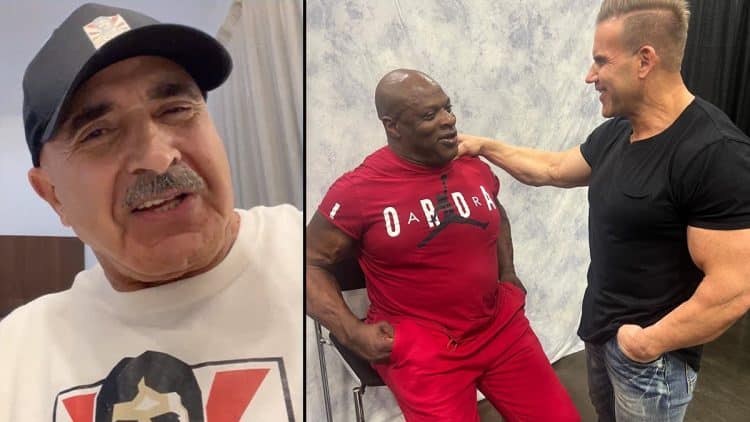 Bodybuilding veteran Samir Bannout is committed to seeing the sport evolve even though he’s hung up his posing trunks. In a recent YouTube video, Bannout discussed Ronnie Coleman‘s deteriorating health after seeing him stand next to his successor Jay Cutler at the 2022 Arnold UK.

“We have Cutler, who stayed looking young and healthy — and Ronnie [who] is falling to pieces,” says Samir Bannout.

During his reign, Ronnie Coleman won the Mr. Olympia title eight times consecutively (1998-2005). “The King” finally met his match against Jay Cutler, who took his throne in 2006. Their rivalry is widely considered to be one of the greatest the sport has seen. Coleman was celebrated for his uncanny strength and work ethic. While Ronnie’s unparalleled size proved to be his greatest weapon, it came at a heavy cost.

Since retiring, Ronnie Coleman revealed that his back has been operated on more than 10 times. These surgeries left Coleman unable to walk unassisted. In spite of these hurdles, the bodybuilding legend hasn’t stopped what he loves and still lifts weights today. He’s become an inspiration in retirement and doesn’t let his health issues deter him from exercising.

Ronnie has zero regrets looking back on his career, but Samir Bannout shared a different school of thought. He contends that if Coleman would have implemented “boundaries” then perhaps his health would be on par with Cutler, whose longevity is lauded at 49 years old.

In the latest Muscle Maturity Podcast episode, Bannout was frustrated after seeing Ronnie Coleman struggle to walk while handing out awards at the 2022 Arnold UK.

“We know he trained like a mad man. We know he was very powerful but, in my opinion, there should of been a boundary where you know, ‘enough is enough, I look good, I won eight Olympia,’ what the hell. Then there’s life afterward.

It bothered me. It hurt me to see one of the greatest and not to see him be like Jay,” Bannout shared.

While Samir believes Ronnie to be one of the most powerful people to walk the earth, he believes it came at a cost.

“Ronnie is one of the most powerful people ever,” says Samir. “So, I think like we said earlier, you don’t have to go crazy. Once you’re massive, and Ronnie was massive, but he just loved to kill the weight. That’s who he is.”

Hansen said that Coleman was never concerned with the future during his prime, only being the best, which he says brought the legend down.

“You said it right there — he loved it. Ronnie is very emotional, and I think he let his emotions get the best of him. He loved to train heavy and he never thought ahead of time, he never thought in the future like, ‘what’s this going to do to me?’ That’s what brought him down,” said Hansen.

Bannout named six-time Olympia winner Dorian Yates as another bodybuilder who sustained a number of injuries from pushing too hard in the gym. According to Bannout, Yates suffered from torn biceps and triceps due to ‘extreme’ training.

“Look at Dorian Yates also. He has a couple of bad injuries. He’s torn both biceps and both triceps. Because also Dorian was a warrior and he was always going extreme heavy. So, that’s the consequences…”

He’s long stepped away from competing, but Coleman is a great ambassador for the sport. In retirement, he routinely shares videos reflecting on his career and recently gave his thoughts on the Men’s Open lineup for 2022 Mr. Olympia.

New contenders like Andrew Jacked have emerged but Coleman doesn’t see the top three changing from last year. Though, he did say that reigning 212 Olympia winner Derek Lunsford and Nick Walker could shake things up. Unlike Coleman, Samir Bannout has suggested that Jacked could make the first call-out at 2022 Mr. Olympia.

Despite no longer competing, Coleman’s aggressive style of training is still valued today. Given his accolades, Bannout holds Coleman in high esteem but wishes he would have used boundaries while lifting to preserve his body.

Andrew Jacked Promises ‘The Best is Yet to Come,’ Will He Live Up to The Hype at 2022 Mr. Olympia?