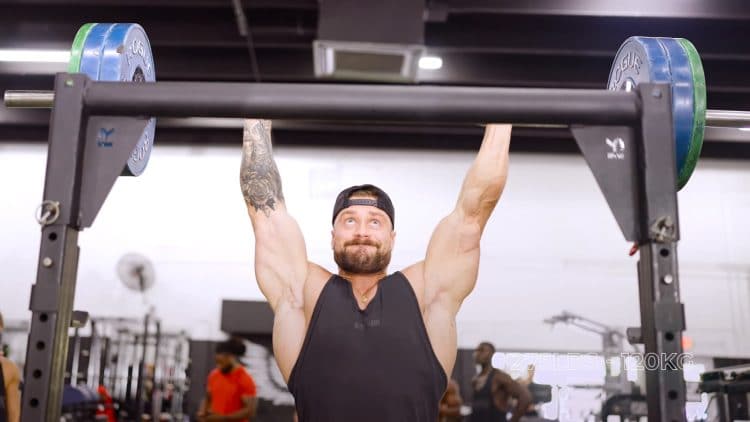 In a new video on Gymshark’s YouTube channel, a group of brand’s athlete partners take on a Strength Challenge, progressively upping the weight in the 1 rep max standing push press exercise. The video featured many big names, of which Classic Physique champ Chris Bumstead and CrossFit athlete Noah Ohlsen stands out the most.

At the start of the video, David Laid explains why the group chose the push press exercise:

The Results In The Push Press

It is worth noting that at the end of the video, the camera man, Kofi Yeboah, wanted to see how much he could lift. Kofi ended pressing 130 kg (286.6 lbs), which is more than anyone has done.

Laid has a significant social media following, which has helped him gain notoriety in the fitness field. The bodybuilder and powerlifter has amassed a large following of admirers who are awestruck by his appearance and ripped physique.

Laid stated in the start of the video that he damaged his elbow while arm wrestling, alongside having some shoulder pain. Because of that, Laid only lifted 50 kg, and did not try to go heavier.

Related: David Laid Tries Plant-Based Diet, And He Does Not Plan To Quit

3x Classic Physique Mr. Olympia, Chris Bumstead, recently had a break to let his body recover from bodybuilding. He also had a battle with Covid-19, which resulted in a 28lbs weight loss. Taking all of that into consideration, Chris has still somehow managed to win the strength challenge.

At the start of the video, Chris stated that he has a massive weight advantage and that he should win. His first lift was 50 kg, and he claimed the win with a comfortable 120 kg push press.

Noah Ohlsen has established himself to be one of the Fittest Men on Earth through his CrossFit endeavors. His highest placing in the CrossFit Games was in the 2019 edition, where he managed to come 2nd.

Noah managed to lift 110 kg, but couldn’t complete the 120 kg push press. He had two attempts, and both were very impressive, as he managed to get the bar just above head level, but couldn’t lock it out.

Bamfo is a fitness influencer coming from Ghana. He is known for his shredded physique and workout videos, which accumulated him 1.3 million followers on Instagram.

Bamfo was not able to lift 120 kg, but 110 kg was comfortable for him, even though he had a bit of a slowdown in the middle of the lift. For Bamfo it seemed good as he said:

Julian is a fitness lover, and he unexpectedly sneaked in with a pretty heavy max lift of 110 kg. Julian is a very good friend with some athletes in the CrossFit community, which enabled him to train with some of the fittest and strongest people to ever live.

Ashton is a fitness model, influencer and a personal strength and conditioning coach. He has accumulated 1.3 million followers on his Instagram account, with almost 200 k YouTube subscribers.

Ashton’s 1 rep max came out to be 110 kg, even though Ashton was not able to lift 100 kg. Furthermore, he used minimal momentum, which made it look more like a strict military press.

Will is a fitness YouTuber, who does challenges regarding diets and workouts, along with some advice and tips. He has multiple videos surpassing 1 million views on his channel.

Will lifted 100 kg, and tried to move on to 110 kg. After lifting the weight of the rack, he decided that it was not comfortable for him, and abandoned the lift. Will’s actions are very smart, as they point out that ego lifting is not the way, because it will probably cause injuries.

Patterson is a certified fitness trainer who has an amazing physique. For Patterson, 100 kg turned out to be too heavy, so his 1 rep max push press was 80 kg.

Elika is a Gymshark sponsored athlete with a somewhat smaller build, but a great physique. Elika is seen lifting 60 kg in the video, but not attempting the 80 kg lift.

Chris Bumstead has unsurprisingly claimed the win in this challenge, even though someone like Noah Ohlsen had a better lifting technique. Chris’s last lift looked very comfortable for him, and it looks like he is carrying some serious strength.

Retired MLB Pro Kyle Farnsworth plans to make a huge splash in the Classic Physique division in just a few...