Shaw and Hall crushed leg day at the same Planet Fitness the four-time WSM winner was kicked out of in 2018 for scaring a woman while filming a workout. 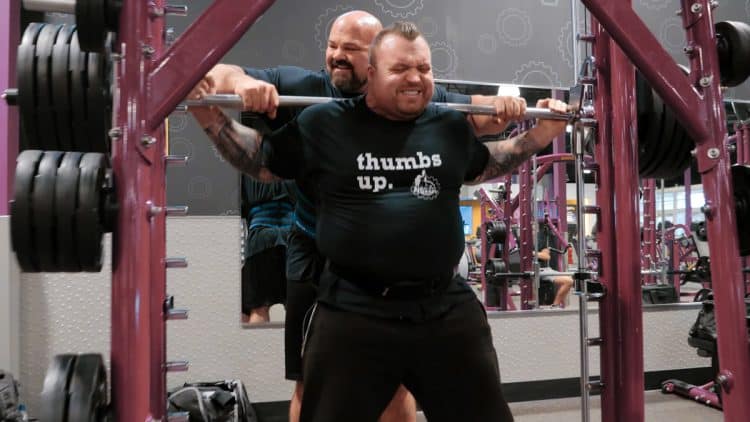 Brian Shaw and Eddie Hall have remained close friends since battling at the World’s Strongest Man competition over the years. Shaw and Hall recently teamed up for a leg day workout at the same public gym that Brian was kicked out of back in 2018 with bodybuilder Jujimufu.

England’s Eddie Hall is another former frontrunner in the sport of strongman. He is best known for his storied rivalry with Hafthor Björnsson. Initially, Hall held the world record on the deadlift. However, Björnsson eventually surpassed Hall with a record that still stands today at 501 kilograms in 2020.

In 2017, Hall reached the pinnacle of his career and in doing so, defeated his arch nemesis Thor in the finals of the World’s Strongest Man. They settled their differences again earlier this year when they fought each other in the boxing ring where Björnsson won via unanimous decision. Hall has made no mention of a return, and Thor announced his retirement from boxing in October. Sticking to what they know best, Shaw and Hall linked up for a fun leg day training session.

Find a full list of the exercises used in Shaw’s video below:

“Brian you literally have a hamburger on the back of your neck. I don’t know if I should eat it or swipe my credit card,” Hall told Shaw.

Before moving to the ab machine, Shaw and Hall refueled with some beverages.

Hall and Brian approached the ab machine next.

“This machine, I don’t think you’re very familiar with it,” Shaw said.

“Brian — I invented this machine. Can you not tell?” Hall replied.

They proceeded with two sets on the leg press machine.

“I’m trying not to make noises and keep it within the rules Brian,” Hall said. “He just looks like a little kid swinging his legs on park bench.”

The two strongmen hit reps on the adductor machine and challenged each other to make strange noises during the set. After Hall screamed in agony a couple of times, Shaw surrendered quickly.

“Alright you win. You win.”

Shortly after Hall and Shaw’s hilarious scream battle, gym staff approached the strongmen and asked if they were okay.

“Did you hear that Brian, they said they heard someone screaming,” says Hall.

“It sounded like a dying goat,” said the gym member.

Hall opted for a pizza break before the final challenge.

“We are going to hit the circuits. There’s 20 pieces of equipment in here. We have to do one rep. Come over here and do a step up and then down. Go to the next machine. Then time it and see who goes faster,” Brian shared.

After a close battle, Hall pulled ahead and won the circuit race.

“Okay. So I win yeah. Like I won the last competition when we were up against each other,” said Hall.

In the past, Shaw also made an appearance at the same Planet Fitness in the company of fellow strongman Robert Oberst. In one of Shaw’s recent workouts, he joined hands with America’s Greatest Log Presser Bobby Thompson as well. They blasted their upper bodies with a strenuous workout in preparation for the 2022 Shaw Classic.

Shaw and Hall walked away with a pump even though the gym staff had a few questions. In spite of all the fun, Shaw and Hall fortunately were not booted out of the Planet Fitness gym this time.