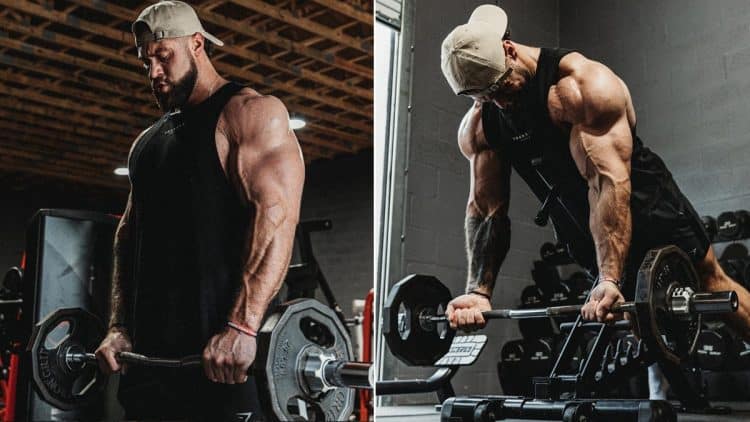 Three-time reigning Classic Physique Olympia champion Chris Bumstead recently went through an exhausting arms workout, the video of which was uploaded on his YouTube channel. After two consecutive second-place finishes at the Olympia in 2017 and 2018, the 27-year-old won the Olympia Classic Physique title in 2019 by dethroning Breon Ansley. He then went on to defend his title at the 2020 and 2021 Olympia to become one of the most dominant Olympia champions of this era.

For Bumstead, it’s about getting bigger biceps and thicker triceps. The Canadian bodybuilder will attempt to score his fourth consecutive win at the Olympia when the Superbowl of bodybuilding returns to its home in Las Vegas on Dec. 15.

Since starting his competition prep a few weeks back, Bumstead has kept the bodybuilding community updated with his progress in the gym.

Here is a detailed description of Bumstead’s arms workout.

Bumstead started the workout with the triceps rope push-down as usual. However, he superset it with the cable overhead triceps press in this session. Besides targetting the triceps, both movements are incredibly efficient in warming up the elbow joints. Almost every arm movement and exercise requires elbow movement. Warming it up at the beginning of the workout is crucial for improving mobility and avoiding injuries.

CBum performed all sets in this superset with minimal rest periods and jumped into the main workout of the day.

“My biceps I think are weaker compared to my triceps. I’m going to try and focus on them first so I have a little more energy,” Bumstead said.

Bumstead next took to the biceps curl on an old-school plate-loaded hammer strength machine to target the biceps. He said that he sometimes likes to use this machine as an alternative to preacher curls as the machine provides better control of the weights.

Bumstead added that the machine keeps the muscles under tension throughout the rep and recommends using this machine. After performing a few sets of this exercise, CBum returned to working the triceps.

Skull crushers work the triceps and are one of the most common exercises to build triceps strength and muscle mass. Bumstead performed this exercise using the progressive overload principle and cranked out all the sets with incrementally heavier weights.

“The beautiful thing about this exercise is that you get to load the stretch. We’re weaker [at this position] because [there is] obviously so much tension on the triceps. I come and bring in a close grip triceps press, and it just fatigues the sh&% out of your triceps. You’re gassed by the end of it. So it’s almost like a superset within a single set. But keep the weights heavy, no breaks in between,” Bumstead said after finishing all the sets.

The 27-year-old went back to working the biceps with this exercise. While speaking about the benefit of this movement while training alone, Bumstead said:

CBum shared an important workout tip and said that he tries to supinate his wrists while doing the curls. He added:

“That’s obviously the function of the biceps, and having high biceps insertions, the more I supinate, my biceps turn up like crazy because if I never do that my wrist mobility is horrible. So I’ve been trying to do some things to work on that such as this. Even underhand grip pull-ups and rows etc. force your wrists to supinate and it creates a little more mobility which allows your biceps to contract a little harder when you train.”

After cranking out a few good sets of this movement, Bumstead took to another movement to work the biceps.

Bumstead next took to the spider curl with a straight bar. While every curling exercise works the biceps, each variation works the outer and the inner biceps head to a different degree. Spider curls primarily help focus and build the inner biceps head. The Canadian bodybuilder performed a few sets of this exercise and went back to working the triceps in the next exercise.

Triceps pushdown on a plate-loaded machine

This movement mimics a triceps push-down with a straight bar handle. Bumstead cranked out a few good sets of this movement and returned to working with dumbbells.

This movement targets the biceps brachii and brachialis and activates the brachioradialis in the forearms. In addition to improving the biceps and forearms, hammer curls also help increase grip strength. Bumstead performed a few sets of this exercise with moderate weights and controlled movement before jumping on to the next one.

This served as the finisher for CBum’s biceps routine. The reverse grip curls target the biceps brachii, brachialis, and brachioradialis, which are responsible for elbow flexion. It also improves grip strength.

Bumstead performed this movement using a D-handle. Performing the triceps push-down with a reverse grip works the entire muscle but focuses the tension on the medial head that runs from the middle of the triceps down to the elbow joint. This movement acted as the finisher for CBum’s arm workout.

In this workout, the Canadian trained more intensively and variedly than he usually does. Bumstead is on the quest to create a lasting legacy in the sport of bodybuilding and particularly in the Classic Physique division. He started the 2022 Olympia prep with compromised knees and would certainly have preferred to enter the prep without any nagging injuries. The Classic Physique kingpin is surely heading towards a record fourth Olympia gold medal if he can keep up his training intensity for the next 16 weeks.