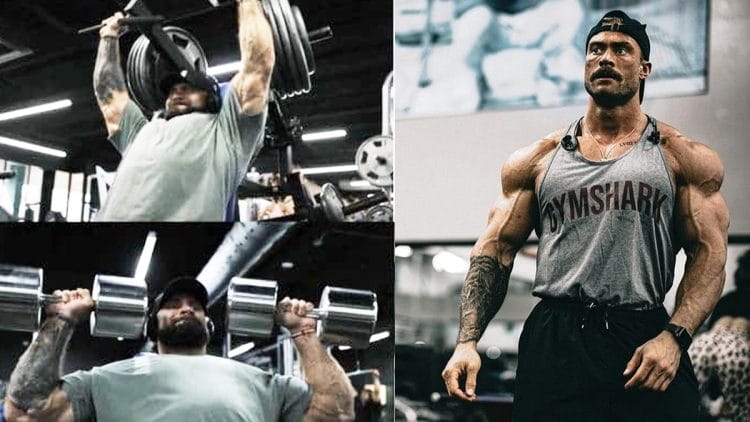 Chris Bumstead, one of Classic Physique’s biggest stars, is turning up the heat on his preparations for 2022 Olympia scheduled for December. In a recent video, Bumstead demonstrated a series of shoulder exercises and showed off a post-workout ‘anabolic’ meal that he swears by.

Bumstead’s body structure, detailed conditioning, and work ethic have guided him to success as an IFBB Pro. He is a three-time Classic Physique Olympia champion, eying a fourth Sandow trophy later this year. Bumstead took the title from the hands of Breon Ansley back in 2019. Ever since winning his first Olympia show in 2019, Chris has pushed himself to bring an improved package each and every time he graces bodybuilding’s most prestigious event.

The reigning champion wouldn’t rest on his laurels despite reaching the top of the sport. In 2020 and 2021, Bumstead once again won Olympia, cementing his name as one of the best talents to come from the bodybuilding category. These victories were not without their trials and challenges as Bumstead can attest, staying on top of a sport as cutthroat as bodybuilding is no easy task.

During his off-season, “C-Bum” consumes a whopping 5,000 calorie diet during bulking season. This stage of preparation is paramount to his success because Bumstead lost a lot of weight as a result of a COVID-19 diagnosis last year. There is under six months until 2022 Mr. Olympia, and off-season preparations are in full swing for just about any bodybuilder who plans to make waves at the show.

Find a full list of the workouts used Bumstead’s video below:

*Note: Reps and sets were listed as accurately as possible using the footage provided in the video

The Canadian native started off the workout routine with seated dumbbell shoulder presses. He performed one warm up set before firing off four sets for six-nine reps.

“I’m trying to figure out what my goals will be for this year. I mean strength-wise, not for competing. I feel like I got to be able to shoulder press 140-pounds, so 10-12 weeks out, 140.” Bumstead explained. “I have to wait to go heavier.”

Bumstead opted for another warm up routine by performing band shoulder internal rotations to loosen up his joints.

Next, Bumstead used the shoulder press machine. He practiced one warm up set and three regular sets for 8-10 reps during this exercise. According to the reigning Classic Physique champion, remembering/counting his weight plates has become difficult. He added that he intends to start keeping a notebook to log his gym progress so he can focus on improvements throughout the season.

“I can’t believe I’m saying this, but I think this might be the year where I pull out a notebook and start logging my weight. I can never remember the weights I’m doing now. I’ve never done that in the past but I think this year I have to stop being a little bitc* and try and actually get strong. Then, I’m going to have to track shi* log it, and actually progress and get better.”

Before the next exercise, Chris explained that he prefers to utilize compound heavy movements for a few sets in the 8-10 rep range.

“Method to almost all my workout has been like a compound heavy movement, two sets, heavy reps, 8-10 maybe. Then, I move on to a machine, three sets there, two heavy one lighter. Then I go really heavy, all-out. Bumstead explained.

“I feel like I do all the time because they are convenient. Bumstead said. “I’m always open to new things.”

Chris proceeded with three sets of 7-10 reps on the machine reverse fly.

Before starting on the standing lateral raise machine, Bumstead shared that his delts are already exhausted. He performed one set for seven reps for his last movement.

“Wow, [my] delts are already fried. My body was fried on that last set so I’m just going to hammer out a drop set, finish it up and call it a day and go home and eat some cereal and go to bed.”

“We’re going to go home and show you guys the post-workout meal I’ve been eating.”

After taxing himself during a brutal workout, the 27-year-old consumes a Raw Nutrition chocolate protein shake, using cocoa-flavored brown rice crisps. This ‘anabolic post-workout meal’ consists of 110 calories and roughly 23 grams of carbohydrates.

“Two scoops of chocolate protein (RAW Nutrition). I used to do this with cookies and cream and using cocoa flavored brown rice crisps but I’ve been using these ones because they have less sugar. They only have one gram of sugar for the entire servings, 110 calories, 23 grams of carbohydrates. I probably have like six servings of this, I would say, based on what I have left in the box after.”

When it comes to liquid meals, Bumstead likes to turn his shake into a frosty-like concoction and believes the beverage tastes a lot better with cold or frozen milk.

“So, super easy way to get your carbs in after, with the chocolate mix. I always put [3/4 of the container] that much ice, that much water, two scoops of protein. It makes it into a frosty style thing. Everybody knows warm cereal milk, not good at all.

In addition to diet and training, the reigning Classic Physique champ pulled the curtain back on his use of PEDs lately. Bumstead says that he used to be on a typical bodybuilding cycle, which consisted of four or five different compounds. However, he revealed that he’s ‘decreased everything’ as of late and is looking much better as a result of taking two compounds instead.

While adding muscle to his frame in the off-season, Bumstead has given fans a sneak peek into how he’s currently training. He shared a ‘brutal quad-burning’ leg day workout, and judging by the intensity of the session, his strength is building.

If this training session was any indication of his 2022 agenda, Bumstead plans to separate himself from the rest of the pack in Classic Physique this winter. 2022 Mr. Olympia is less than six months away and clearly, Bumstead’s training schedule is ramping up.