The three-time Classic Physique Olympia champion is back to building his legs after taking five days off training. 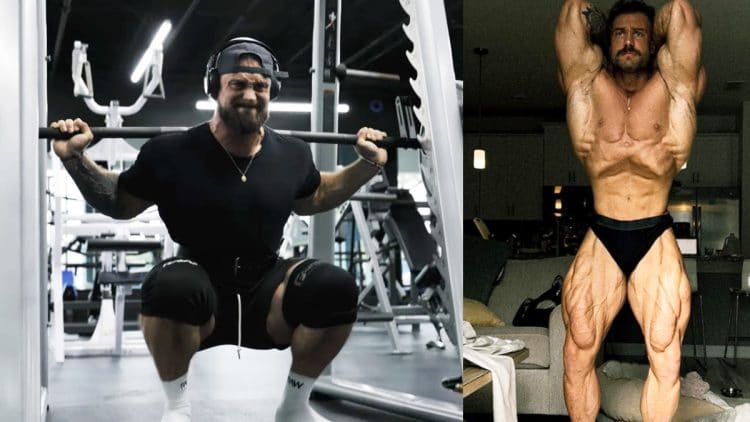 Three-time Classic Physique Olympia champion Chris Bumstead is preparing for another season of bodybuilding. In a recent YouTube video, Bumstead demonstrated a series of leg workouts in preparation for 2022 Olympia in roughly six months.

Bumstead is one of the most well-known stars in the sport of bodybuilding. He is the reigning Classic Physique Olympia champion, a title he’s held since 2019 after dethroning Breon Ansley. Bumstead has done the unthinkable, and that’s bringing an improved physique each and every time he graces bodybuilding’s biggest stage. After taking home Sandow trophies in 2020, and 2021 as well, the 27-year-old has no plans of surrendering gold to anyone.

Praised for his unique ability to prepare for contests, Bumstead leaves no stone unturned each time he kickstarts a bodybuilding season. “C-Bum” contracted the Coronavirus infection last year in December. As a result, he lost a considerable amount of weight. In order to ensure that he stays on track for Olympia this year, the credentialed Pro shared a 5,000-calorie diet he’s adhered to during off-season prep.

Aside from his diet, Bumstead has also made it a point to share his cycle this season with fans. The IFBB Pro maintains that he’s ‘decreased everything’ and believes he looks ‘much better’ now. While the Canadian native used to push between four and five compounds during a given season, he attests that he’s seeing results with just two compounds instead, one being 200 migs of testosterone a week.

*Sets and reps are made available by the footage provided

After taking five days off from training, Bumstead returns for legs — one of the more difficult body parts to train. He starts on the StairMaster for a warm-up movement. Bumstead provided his fans with a quick update and made his following aware that he recently got bloodwork done.

“You get a nice deep ended pushdown. I took five days off training or so. I don’t know why but taking time off it should usually leave you feeling rested, but it leaves me feeling tired, tighter and more broken than I was before.

But I’m sure it’s still good for my nervous system to take a break. I got my bloodwork done on Saturday. Should be getting the results in the next few days to see if I’m healthy or not. Fingers crossed; I’m feeling pretty good.” Chris Bumstead shared.

Bumstead added that he’s not going to kill himself today, since he hasn’t done a full leg day in two weeks.

“Going to slowly ease back into this since it’s been two weeks since I’ve done a full leg day. I’m not going to kill myself today, but we’ll see where I’m at. I’m already out of breath doing thirty seconds on the stairs.”

For his first exercise, the three-time Classic Physique Olympia champ opts to hit alternating/single leg extensions. He focused on high-volume, which consisted of two sets for 20 or more reps.

“That’s a lot of cardio. First exercise, single leg quad extension. Two sets of 20 reps or more. I hit 23 on the first set, 21 on the second, just trying to get a lot of volume.”

Bumstead moves on to the hip adduction machine next. The footage provided featured one set for six reps.

“This is one of the best warm ups that you didn’t know you needed before squatting.” This helps you get deep into a squat.”

The IFBB Pro is adamant that warm up movements are best before attacking an exercise like smith machine squats.

Next, Chris hits smith machine squats to emphasize the burn in his quads. He prefers to keep his stance closed during lifts because it provides a more thorough burn. He completed two sets for 11-12 reps during this movement.

“A lot of reps. I feel like it was only actually 11. Anything over 10 kills me. I was trying to do a front squat closed stance. To really emphasize my quads. Second set was just high volume, closed stance, trying to burn my quads.”

Bumstead moves on with alternating/single leg presses next. He performed two sets in the 7-10 rep range. The reigning Classic Physique Olympia champ prefers to hit one leg at a time for a few reasons, one of them being that it prevents his legs from growing unevenly.

Secondly, because I can get a little bit more range of motion to prevent one from being lopsided especially because I have a tight erector on my right side right now, which can cause me to favor my left leg. So, avoiding that, by doing one leg at a time.”

For his final exercise, Bumstead emptied the tank with seated calf raises. Chris finished the workout with a total of five sets in the 8-10 rep range.

“So tabs, we did a total of five sets. The first two was four plates, really heavy. My goal is to just do some heavy sets. My bro science thinking, if you walk all day on your calves, that’s high volume.”

Despite taking some time away from training, Bumstead is still pushing the pace inside the gym. Men’s Open Olympia contender and brother-in-law, Iain Valliere, has helped Bumstead throughout his bodybuilding tenure and joined him for a leg day workout routine back in May. Bumstead believes training alongside an elite-level Men’s Open competitor is only an advantage as he eyes his fourth Sandow trophy.

There has been speculation that Chris may one day try his hand in the Men’s Open division. Speaking with coach Hany Rambod earlier this year, Bumstead revealed he has struggled in the past to meet the weight requirements for Classic Physique given his height. During the interview, Chris made it clear that there is some interest for a move into Men’s Open ‘maybe one time’ before he retires.

If there’s one thing for sure, Bumstead plans to bring his best package to date at 2022 Olympia, where he intends to capture his fourth straight Classic Physique title. Judging by the recent leg day workout, Bumstead appears to be on track with his off-season progress.

How Many Calories Do You Burn With Reverse Crunches?