Chris Cormier Agrees With Derek Lunsford’s Special Invite: ‘He Deserves It, He Held His Own’

The bodybuilding veteran said Joe Weider gave Günter Schlierkamp special invitations plenty of times and never had a problem with it. 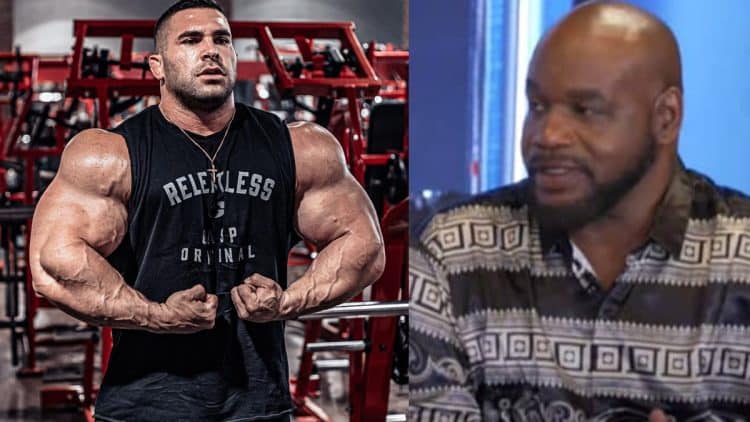 Bodybuilding veteran Chris Cormier was a force to be reckoned with during his prime and still keeps up with the sport decades later. In a recent video, Cormier argued in favor of Derek Lunsford receiving a special invitation to compete at 2022 Mr. Olympia in the Men’s Open division this December.

Chris Cormier built a successful career with hard work and determination. He’s graced the Mr. Olympia stage plenty of times, where he competed against the world’s best — and oftentimes, pushing those athletes to the brink of defeat.

One of the latest bodybuilders to receive a special invitation is Derek Lunsford. He is the reigning 212 Olympia champion but will now likely compete in the Men’s Open division courtesy of a special invitation he accepted in September. This invite came after he left the world stunned by his size in a guest posing appearance at Jim Manion’s 2022 Pittsburgh Pro.

There were mixed reactions after the surprising news went public. Some were in favor of Derek getting the special invite, however, others wondered why he didn’t earn a spot at the contest by winning a Pro qualifier. Among his supporters was Chris Cormier, who contends that Lunsford “deserved” the qualification to Olympia more than any other competitor he’s ever seen.

After witnessing Lunsford drop jaws in Pittsburgh while guest posing, Cormier believes the reigning 212 Olympia champ has the mindset, drive, and body to impact the Men’s Open division, assuming he chooses to compete in that category.

“I think it’s great — I mean I love it. When I was in competition, there was always someone that got a special invite. This guy has deserved it I believe more so than most of the any other competitors I’ve ever seen. At this juncture, he has the body, he has the mindset, the drive — he’s a great guy. Great for the sport. I think it’s a win-win for everybody,” says Chris Cormier.

During his career, Cormer reflected on Günter Schlierkamp receiving special invitations, which he said he didn’t have a problem with.

“Well, Günter Schlierkamp. He was a perennial invitee, if you will. You know, Joe [Weider] loved him. He thought he’d be good for the sport to have him in there. He gave him invite after invite after invite. Okay, so with Derek, I was there in Pittsburgh. I saw the mouths drop when he came out,” says Cormier.

Cormier thought Lunsford thrived when he guest posed in Pittsburgh while standing next to a couple top-tier Men’s Open competitors.

“There was [Brandon] Curry, [Nick] Walker, Hunter [Labrada], and yeah, so he was up there with some of the best of the best. He not only held his own — I thought his structure, the way of his muscle insertions — the chest was half of his body, it was all pec… he has the abs, the front double biceps, the lat spread. I mean, proportionately, his body is put together so great; he deserves it. He was holding his own with everybody.”

Despite Joe Weider giving special invitations to Schlierkamp earlier in his career, Cormier wasn’t bothered by it.

“No [I didn’t have a problem with Günter getting special invitations]. But he did beat me in the symmetry round in that one show that he won. I was upset with that one but for the most part I was okay,” Cormier shared.

If Lunsford ends up competing in the Open class, Cormier predicts he will be met with a few challenges. However, he said Derek will likely finish in the top six at 2022 Mr. Olympia.

Cormier to Lunsford: ‘Against Big Guys, You Got to Hit Poses Correctly’

According to Cormier, Lunsford has to improve his posing in order to be competitive against the Men’s Open division at Olympia this year.

“I’m going to keep in there in the top six area. He does need to improve his posing. I mean that was kind of an eye sore, some of the ways he’s hitting some of these shots. Utilize his legs, utilize his whole body in some of these poses is going to help Derek a lot. If that happens, he had striations in his quads at Pittsburgh, so I don’t see his conditioning being an issue.

He’s going to look really good, but like I say, when you put together the poses and you go out there against big guys, you got to definitely be able to hit those poses correctly. I’m going to keep him around that [top] six area,” Chris Cormier explained.

With better posing and improved conditioning, Cormier sees Lunsford as a viable contender to the title.

“He does have a lot of density he’s been showing. I think what’s going to help him is the way he’s put together. His body is really put together. I just hope that he comes in with a nice package and posing — like a champ.”

Cormier has retired from the sport but doesn’t miss a chance to talk about his former proving grounds. The last time he tackled a discussion, it was geared around modern bodybuilders not competing as often as athletes did in the 1990s. During his tenure, Cormier remembers competing at 11 shows on average per year.

RELATED: Bodybuilding Veteran Chris Cormier Warns Others of Synthol Use: ‘I Actually Used It in My Calves, The Damage is Real’

While aspects of the sport have changed, Cormier remains committed to seeing bodybuilding evolve. Some have taken issue with Lunsford’s recent special invitation, but Cormier believes it adds an exciting dynamic to Mr. Olympia contests.