The bodybuilding veteran looks to have massively downsized since his last appearance on stage in 2018. 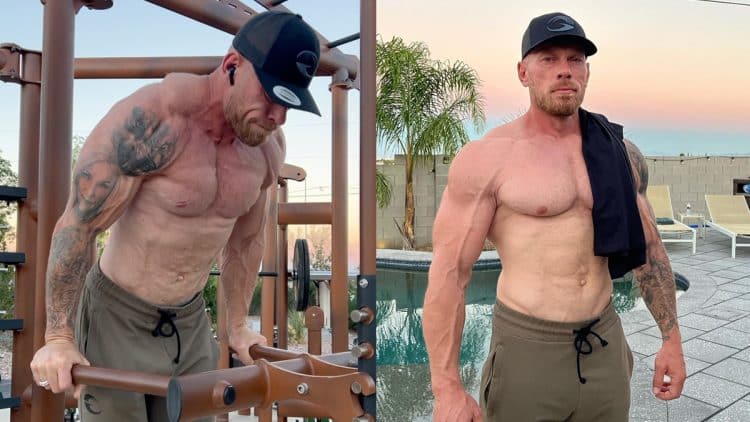 German bodybuilder Dennis Wolf is back in the headlines following an impressive physique update at age 43. In a recent post made to Instagram, Wolf showed off his jacked build in the midst of retirement.

When Wolf entered the IFBB Pro League, he quickly established himself as a dominant figure. He led a successful tenure in the sport, which spanned over two decades. The Men’s Open standout boasts a number of accolades, but the biggest victory of his career came in 2014 at the Arnold Classic.

While competing against the world’s best, Wolf was known for his thin waist and spectacular quad sweeps. Even though he was unable to win the prestigious Mr. Olympia title, Dennis pushed several iconic athletes in each and every outing. Wolf shared the stage with seven-time Mr. Olympia Phil Heath, Kai Greene, the late Shawn Rhoden, as well as the timeless wonder Dexter Jackson, just to name a few.

The last time we heard from Dennis Wolf, he was smashing a hardcore ‘chest sunset’ workout. He also gave fans a physique update, showcasing a downsized build compared to years prior. Wolf pushed the limits of his weight years ago while competing, and often exceeded 300 pounds during the off-season. However, the retired Pro is now prioritizing his health since stepping away from the sport.

In a recent Instagram post, Wolf shared his current build with a sunset backdrop. Compared to his last update, Wolf looks to have lost a few more pounds. In the caption, he asked fans if he should consider adding back some of his muscle mass.

“Monday motivation 💪
What you guys think, should i pack on a few more pounds or stay at 211 lbs/ 96kg?” Dennis Wolf wrote.

Following the update, fans wouldn’t rule out Dennis Wolf trying out Masters Olympia in the future. Earlier this year, Olympia President Jake Wood hinted that the show might return in 2023. As of this writing, Dennis has made no mention of a comeback, however.

The sport has certainly undergone some drastic changes since ‘The Big Bad Wolf’ was on top. He joined four-time Mr. Olympia Jay Cutler to elaborate on some of those changes. His biggest takeaway from modern bodybuilding is that too many athletes have been dying.

Shockwaves continue to rattle the bodybuilding community following several deaths as of late. Last year, Wolf’s former opponent, Shawn Rhoden, died of heart complications at 46. Before 2021 could end, George Peterson also passed away when he was found face-down in his hotel room while prepping for last year’s Olympia.

The deadly trend continued this year. Months ago, the sport lost an Arnold Classic champion in Cedric McMillan at 46. And just over last weekend, fellow German bodybuilder Andreas Frey lost his life at 43. Given the dangers present in the sport, it’s refreshing to see an athlete as decorated as Wolf eager to keep his health in good standing.

Wolf remains committed to training and isn’t slowing down in retirement. Despite a growing number of deaths in the sport, Dennis Wolf intends to maintain his health and fitness for the foreseeable future.