Lunsford kicks off the Olympia prep amid speculations of a possible transition to the Open division. 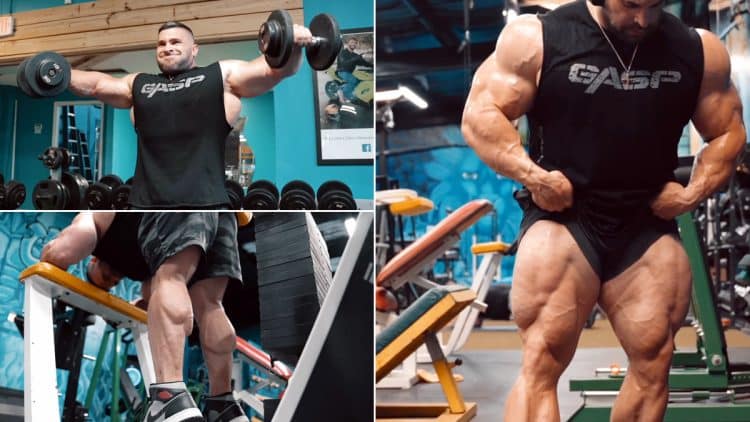 Reigning 212 Olympia champion Derek Lunsford started the 2022 Olympia prep with a high-volume shoulders and calf workout. Following runner-up finishes at the 2018 and 2019 Olympia and a fourth-place finish in 2020, the 29-year-old finally achieved his dream of becoming the 212 Olympia champion by defeating Shaun Clarida in 2021. Recently, there have been rumors that he might switch to the Men’s Open division at the upcoming Olympia, but he has not yet confirmed or denied anything regarding the move. However, assuming that he stays in the 212 division, he will face tough competition from the likes of Kamal Elgargni and Shaun Clarida, who both made their debut in the Open division in the 2021-2022 season.

The 2022 Olympia will take place from Dec. 15-18 in Las Vegas—approximately 18 weeks from the time of this article’s publication. Lunsford is currently focusing on bringing his best physique to the grandest stage of bodybuilding—the Olympia. Recently, Lunsford announced the beginning of his Olympia prep during a shoulders and calves workout, the video of which was uploaded on his YouTube channel.

The purpose of these specific movements was to warm up the rotator cuffs.

“It’s just going to help prevent injuries and get me very mobile in the joints. So that way, I feel better going into these heavier sets. It’s very important that you take your time, five minutes, ten minutes, whatever it takes to warm up the rotator cuff muscles,” Derek Lunsford said.

After the warm-up session, Lunsford jumped right into the heavier sets and performed side lateral raises. Notably, the 29-year-old did not extend his arms all the way out to utilize a full range of motion. Instead, he kept the range slightly restricted as the hands were slightly below shoulder height. Lunsford explained:

“It’s not that I want my form to slack at all, but the movement might not be so exaggerated. I might not go up quite as high, and I might not turn the wrists out. That’s because it’s a little bit heavier. I am trying to make sure that in the beginning, I am exaggerating the movement the best I can.”

Lunsford performed the working set with a slow and controlled motion. However, since he did not feel a ‘massive pump’, he finished the exercise with a back-off set with 55-pound dumbbells.

“I’ll try to get the (reps) cleaner than the last time I did them. So for me, that’s what I think about during back-off sets. It’s not just—grip it and drip it. Yes, I will want it to be moderately heavy weight, but I want to make it cleaner than the first time I did it. I want to control the weight better with the muscle I am trying to stimulate.” Derek Lunsford said.

Derek Lunsford performed the first set of the shoulder press with a single plate. Lunsford explained that he normally prefers to increase the weight by a quarter plate with each consecutive set. However, his shoulders were sufficiently warmed up due to the previous work in this session. Therefore he felt comfortable taking a full plate jump for the next set and finished the exercise with a drop set with a single plate.

After getting a pump with the seated shoulder press, Derek Lunsford shifted his attention to working the front delts with front raises.

After working the front and side delts in the previous exercises, Derek Lunsford worked the rear delts with the reverse pec deck fly. Lunsford performed the first couple of sets with moderate weights to warm up the rear delts as they were relatively not as active during the other exercises.

Following this, the 29-year-old contemplated adding a drop set. However, he wrapped up the exercise after a few working sets.

Derek Lunsford took to this moderate-intensity exercise next. According to him, this exercise was:

“Just a little finisher here. Nothing crazy. It’s not like working sets – just feeling it out. I’ve already done enough damage to the muscles. This is just more for the recovery.”

This movement served as the finisher for the shoulders workout as Lunsford switched to the calf workout next.

The standard calf raise variations—standing and seated—work the soleus and the gastrocnemius muscles. However, not many exercises specifically target the tibialis anterior or the muscle on the front side of the shin. The seated tibia raise targets this very muscle. While explaining their benefit, Derek Lunsford said:

“What I’ve noticed is that overall the calves have gotten bigger, but also they’ve gotten significantly stronger. Immediately once I started doing this exercise, I noticed that training the back side of my calves grew more and were able to take a lot more weight.”

Derek Lunsford performed a few sets of this exercise and moved on to bent-over standing calf raises. With that, the shoulder and calf workout came to an end.

When Lunsford guest posed at the 2022 Pittsburgh Pro, it was immediately noticeable that he could go head to head with the Open competitors—Nick Walker, Brandon Curry, and Hunter Labrada. Additionally, Lunsford’s coach Hany Rombod, and Olympia president Dan Solomon have raised concerns about his ability to compete in the 212 division.

Lunsford himself has been candid about his desire to compete in the Open division. However, it is not clear when he will make the transition. The reigning Olympia 212 champion has promised to give his 100 percent irrespective of the division he competes in this year. Looking at the work he is putting in, a second consecutive 212 division win is likely on the cards for him at the 2022 Olympia.